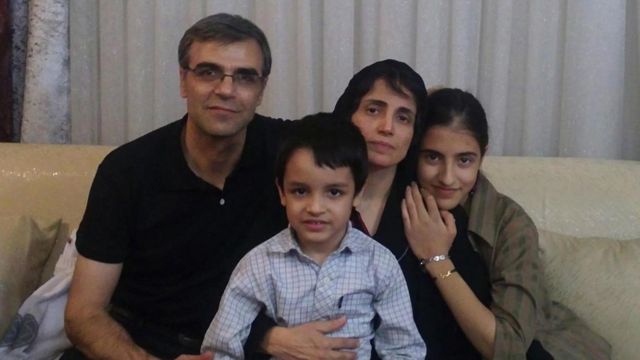 Nasrin Sotoudeh’s Health Deteriorates as Rouhani Speaks at the UN

The health of imprisoned political prisoner and women’s rights activist Nasrin Sotoudeh is deteriorating. As detailed in a previous issue of Iran Unfiltered, Sotoudeh has been on a hunger strike since early August in protest at the continued imprisonment of political prisoners. Sotoudeh’s 20-year-old daughter was also briefly detained on August 17th, in what some described as an effort to pressure her to end her hunger strike.

Sotoudeh was at the hospital for five days and has since been returned to prison. Mohammad Moghimi, one of her lawyers, has told Voice of America about her condition: “From the beginning, her arrest and trial was illegal. We now think she has serious health problems given her age, the amount of time she has been in prison, and the fact that she has been on a hunger strike for forty days and she has heart problems now.”

Moghimi says that according to Iranian laws, Sotoudeh cannot go to prison until her health problems are alleviated.

President Rouhani delivered a virtual address for the annual UN General Assembly. Rouhani’s speech denounced U.S. actions against Iran and in the region, but indirectly left the door open to diplomacy.

Rouhani stated: “Dignity and prosperity of our nation are essential for us, and they are attained through diplomacy relying on national will coupled with resilience.”

Rouhani said Iran would not figure into U.S. politics before the election and said U.S. policy toward Iran will change. He proclaimed: “We are not a bargaining chip in U.S. elections and domestic policy, and any U.S. administration after the upcoming elections will have no choice but to surrender to the resilience of the Iranian nation.”

Donald Trump’s UNGA speech only made a brief reference to Iran. Trump said regarding Iran: “We withdrew from the terrible Iran nuclear deal and imposed crippling sanctions on the world’s leading state sponsor of terror. We obliterated the ISIS Caliphate 100 percent, killed its founder and leader, al-Baghdadi, and eliminated the world’s top terrorist, Qassem Soleimani.”

However, in a September 15th speech, Trump said he would negotiate and reach a deal with Iran within “one week” or “one month” of being reelected president.

Rouhani also compared the situation with Iran to the George Floyd murder during his UNGA speech. He proclaimed: “The footage that was broadcast to the world of the encounter of America’s police with a protesting citizen was familiar and repetitive for us. We know this knee on the throat as the knee of arrogance on the throats of independent nations.”

Rouhani portrayed Iran as a constructive regional power-seeking stability and cooperation and denounced U.S. actions against Iran. He stated: “The answer to peace is not war. The answer to combatting extremism is not assassination. The answer to the people’s vote in Iran, Iraq and Lebanon is not stoking street protests and supporting anti-democratic trends.”

Rouhani also said regarding the COVID-19 pandemic: “This universal plague that has crossed over the fabricated boundaries of power and wealth reminds us, once again as members of human society, that it would be impossible to confront common global issues without global participation.”

French President Emmanuel Macron rejected U.S. efforts to unilaterally reimpose UN sanctions on Iran during his UNGA address. Macron said the U.S. has no right to reimpose sanctions because it reneged on the 2015 nuclear deal. He added the U.S. move “weakens” the “unity” of the UN Security Council and the “basis of its decisions.”

Foreign Ministry spokesperson Saeed Khatibzadeh says Iran will respond to the U.S. efforts to reimpose UN sanctions “based on the principle of legitimate defense.” The U.S. unilaterally declared the reimposition of UN sanctions against Iran on September 20th. The rest of the UN Security Council and most of the international community have rejected the U.S. action. Iranian officials have weighed different actions in response.

The past UN Security Council resolutions against allow for the inspection of Iranian ships and aircraft. Kamal Kharazi, a foreign policy advisor to Ayatollah Khamenei, says if the U.S. tries to unilaterally enforce these sanctions, Iran will respond based on “Article 51 of the UN charter,” which allows countries to defend themselves against aggressors.

The Iranian parliament’s research center has outlined steps Iran should take in response to the so-called “snap back” of UN sanctions. The center is currently headed by Alireza Zakani, an anti-JCPOA hardliner.

The parliament’s research center says Iran should return its nuclear program to its pre-JCPOA level. It calls for commencing uranium enrichment at the 20 percent level, installing 19,000 centrifuges in Natanz and Fordo, and reducing access to IAEA inspectors.

The IRGC’s construction wing is building a new $260 million oil refinery in the southern port city of Bandar Abbas. The head of the IRGC’s “Khatam ol-Anbia” construction wing, Saeed Mohammad, said it would be a “new generation petro-refinery” and its construction will be carried out in close cooperation with the presidential administration.

Mohammad said the refinery would be built in two years with assistance from the private sector. He said it would produce 120,000 barrels of gas condensate daily which would come from the South Pars gas field. This gas condensate would be used to produce raw materials for other products.

Rouhani administration spokesperson Ali Rabiee has said “domestic elements” played a role in an explosion at the Natanz nuclear facility in July. Rabiee said this is a “strong hypothesis” and says that Iran’s security agencies are continuing their investigation.

Rabiee stated: “Sabotage is certain on this issue. Sabotage occurred and given the complexity of this sabotage, there are different hypotheses. A few security agencies in different areas are investigating.”

A New York Times report attributed the sabotage to Israel. Just before the explosion occurred, BBC Persian and other outlets received a statement from an “underground group” claiming an attack would occur at Natanz.

The Atomic Energy Organization of Iran has begun rebuilding the destroyed centrifuge assembly facility in a more secure location in the mountains surrounding Natanz. Read more about the Natanz explosion in previous issues of Iran Unfiltered.

A court in Iran’s southwestern Khuzestan province has issued sentences against alleged “agents” behind a 2018 terrorist attack in Ahvaz. 24 people were killed and over 60 wounded in the attack by armed gunmen on a military parade marking the Iran-Iraq War.

In 2018, the IRGC launched missile attacks against ISIS targets in Syria it said played a role in the Ahvaz attack. An IRGC operation also killed “Abu-Zahi,” the alleged ringleader behind the attack. Iran’s judiciary has also arrested several people connected to the attack.

The reformist news website Fararu ran an interview with Rahman Ghahramanpour, an international relations expert, about the U.S. election. Ghahramanpour says a Joe Biden victory will make America’s a more “predictable” country given Biden’s “promises to return to normal interactions.”

Ghahramanpour added about a Biden presidency: “If Biden wins, we will at least know what America we will be facing. What its redlines are, what the principles for its behavior are. Trump has made his defining characteristic being unpredictable.”

However, Ghahramanpour believes Biden will maintain some of Trump’s pressure on Iran. He said: “For example, Democrats avoided adding the IRGC to the terrorist list. But now that Trump has paid the costs for this act, Biden may maintain some of this pressure.”

Ghahramanpour added regarding a potential Biden presidency: “His aim with keeping some pressure will be to make Iran give more concessions and to placate domestic constituencies.”

Ghahramanpour says there is consensus among Democrats and Republicans on reducing America’s presence in the Middle East. He says the U.S. seeks to dedicate more resources to counter-balancing China.

Ghahramanpour says the normalization agreements between Israel and the UAE and other Arab countries are aimed at balancing Iran for when the U.S. leaves the region. Ghahramanpour says there is consensus among Democrats and Republicans on providing for Israel’s security.

Ghahramanpour says Biden will continue to prioritize Israel’s security, but will try to increase space for a two-state solution to the Israeli-Palestinian conflict.