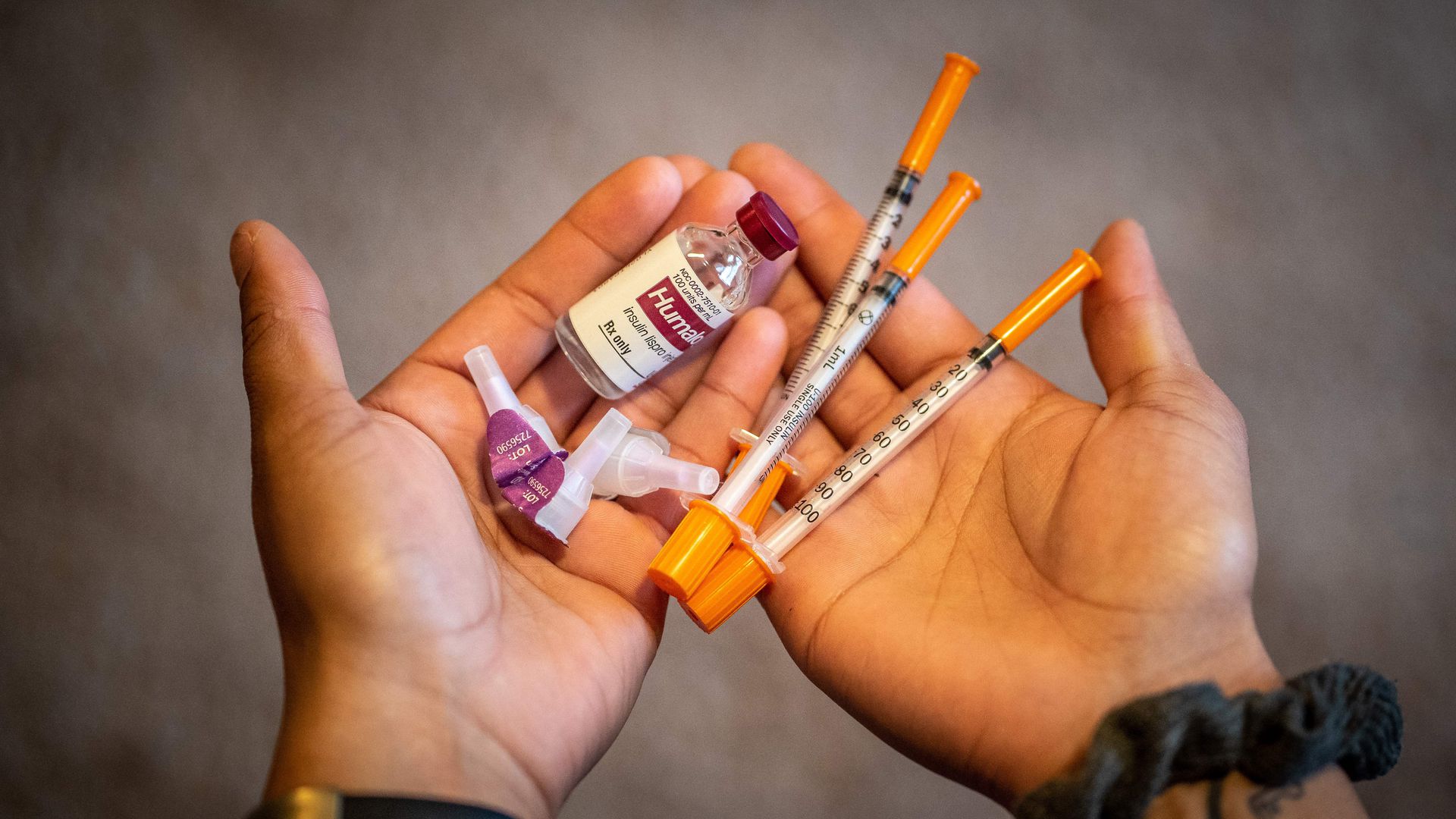 According to reports, “analog insulin” can no longer be found in the market. Iran imports this type of insulin. Currently, U.S. sanctions make imports of humanitarian goods such as insulin, which are technically exempt from sanctions, difficult. This is due to banks refusing to facilitate any trade with Iran for fear of being fined by the United States.

Iranians with diabetes have no choice but to use “human insulin” now. Injecting human insulin is more difficult and unsafe for some diabetes patients, while analog insulin is easier to use.

There are over 5 million people in Iran with diabetes. Of these, over 600,000 require daily injections of insulin.

Iranian social media users blamed both U.S. sanctions and domestic mismanagement on the shortage of insulin. Many wrote tweets in English to let the outside world know of the insulin shortage Iran is facing.

Mohammad Reza Shanehsaz, the head of the Health Ministry’s organization for food and medicine, blamed the insulin shortage on U.S. sanctions. Shanehsaz stated: “The reason for the shortage of insulin are problems rooted in attaining currency and transferring funds to foreign companies because of the sanctions against Iran.”

Shanehsaz also said Iran would be self-sufficient in producing analog insulin by the end of the next Iranian year (March 2022). He said Iran would meet its domestic needs for this drug by then.

However, some reports suggest smuggling is also a cause of the current insulin shortage in Iran. Mahmoud Najafiarab, the head of the economic health commission of the Tehran Chamber of Commerce, says Iran imports 1.5 times the insulin it needs. But he says some of the insulin that is imported is again illegally exported.

Iran has summoned the Swiss Ambassador to Tehran after John Ratcliffe, the director of U.S. national intelligence, accused Iran and Russia of interfering in the U.S. election. Specifically, Ratcliffe accused Iran of being behind threatening emails sent to Democratic voters.

Iranian officials strongly denied the accusation and summoned the Swiss Ambassador to Iran to communicate their protests to the United States. Switzerland represents U.S. interests in Iran and is an interlocutor between the two countries.

Saeed Khatibzadeh, the foreign ministry’s spokesperson, said the U.S. accusation was “repetitive” and “fraudulent.” He also said Iran has “no preference” for who wins the U.S. election.

Khatibzadeh further stated: “The American regime and this country’s security and intelligence agencies have a long history of interfering and causing turmoil in other countries’ elections.”

Khatibzadeh cast suspicion on the aim of the allegations against Iran: “On the eve of this country’s election they make this baseless accusation to advance their undemocratic project and a pre-planned scenario. It is not unimaginable that the architects of this childish scenario are seeking to divert public attention and engage in suspicious provocations just before the election.”

According to Sotoudeh’s husband, Reza Khandan, she was told she would be taken to a hospital but was instead sent to another prison. Sotoudeh was recently hospitalized after developing heart problems while being on a hunger strike for over 40 days.  As detailed in previous issues of Iran Unfiltered, Sotoudeh was on a hunger strike in protest at the continued imprisonment of political prisoners.

Khandan says Sotoudeh needs to go to the hospital “immediately” for a “heart examination and angiography surgery,” based on the advice of doctors. On September 19th, Sotoudeh was transferred to Tehran’s Taleghani hospital due to heart problems she developed amid her hunger strike. After five days, she was returned to prison despite appeals from her doctors to keep her in the hospital.

Nasrin Sotoudeh has been imprisoned due to her legal defense of women who protested Iran’s compulsory hijab law and other political charges. She has been transferred to Qarchak prison even as many of the women she represented, such as Mojgan Keshavarz, Yasamin Ariani, Monireh Arabshahi, and Sabah Kordafshari, have been transferred from Qarchak to Evin prison.

The number of daily COVID-19 deaths has continued to rise and hit a record of 377 earlier this week. According to official figures, 534, 631 have been infected in Iran so far and 30,712 have died. According to the deputy health minister, the real death figure could be twice as high.

According to Alireza Zali, a physician and the head of Tehran’s operations center to address the coronavirus, Iran is experiencing a “third wave” of the virus. Zali says this new peak of cases is seeing patients who are “sicker” and stay in the hospital “longer.”

Health Minister Saeed Namaki spurred controversy after he gave a dire warning about the death toll the virus could take. Namaki said if the virus is not brought under control, “bodies will have to be collected from the bottom of rivers.”

Namaki further said: “We said to close the roads [so people cannot travel] but how many roads were closed? When I read the statistics, I get afraid we will fall into a black hole that will be very difficult to emerge from. A pandemic cannot be addressed through just pleading and asking [the people to abide by restrictions].”

In response to Namaki’s comments, the Iran newspaper, the official outlet of the Rouhani administration, criticized him for “inflaming public anxiety.” The newspaper stated: “Mr. Namaki! Why do us people have to one day feel heartened by your remarks and become hopeful about the future and another day become worried?”

Mahboubfar said public health institutions in Iran employ too many “political” people that lack the necessary credentials to address the pandemic. He says Iran’s public health sector needs to be reformed to become a meritocracy and have increased accountability. He says it needs more specialists who are “independent, non-governmental, and have expertise.”

Analysts in Iran are weighing the implications for Iran of a victory for Joe Biden or Donald Trump in the U.S. presidential election. Some analysts believe a Trump re-election will deliver another negative economic shock and lead to the further devaluation of the rial and increased inflation. Others, close to the conservative camp, maintain there are no major differences on foreign policy between Trump and Biden.

Economist Morteza Afghah says the Iranian market is acting on the belief that Trump will be re-elected. He says a Trump re-election will continue the current trend of the Iranian currency’s depreciation.

Afghah states: “Currently, Iran’s markets are all being affected by an emotional atmosphere. Prices are appreciating. The increased cost of the dollar is one example. If Trump wins, this trend will continue.”

Afghah states a Joe Biden victory will decrease the cost of the dollar, but this may not last. He says Biden may press Iran for negotiations beyond the JCPOA, and that Iran’s economy is “tied to political issues.”

Hossein Kanani Moghadam, a conservative political analyst, says a Biden or Trump administration will not fundamentally differ on their approach to Iran. Moghadam states “Iran is an independent country, and its foreign policy is implemented based on policies that are made domestically. So, the expectation that with Biden the situation will drastically change is baseless.”

Moghadam adds: “Biden will certainly continue Trump’s sanctions. Biden’s foreign policy theoreticians have declared that if Iran does not agree to their demands, they will pursue ‘smart’ sanctions. We see the Democrats are already talking about sanctions and they haven’t even arrived [to power] yet.”

Moghadam says that Democrats and Republicans agree on the same strategies but differ on tactics. He states: “They agree on the strategies to implement their policies. But they differ on tactics. Republicans are more militaristic, violent, and expansionist, and seek to arrogantly advance their policies. Democrats talk of negotiations but seek to sever the head with cotton [an Iranian expression, meaning to achieve the same goal but through a way that is superficially less violent/painful].”