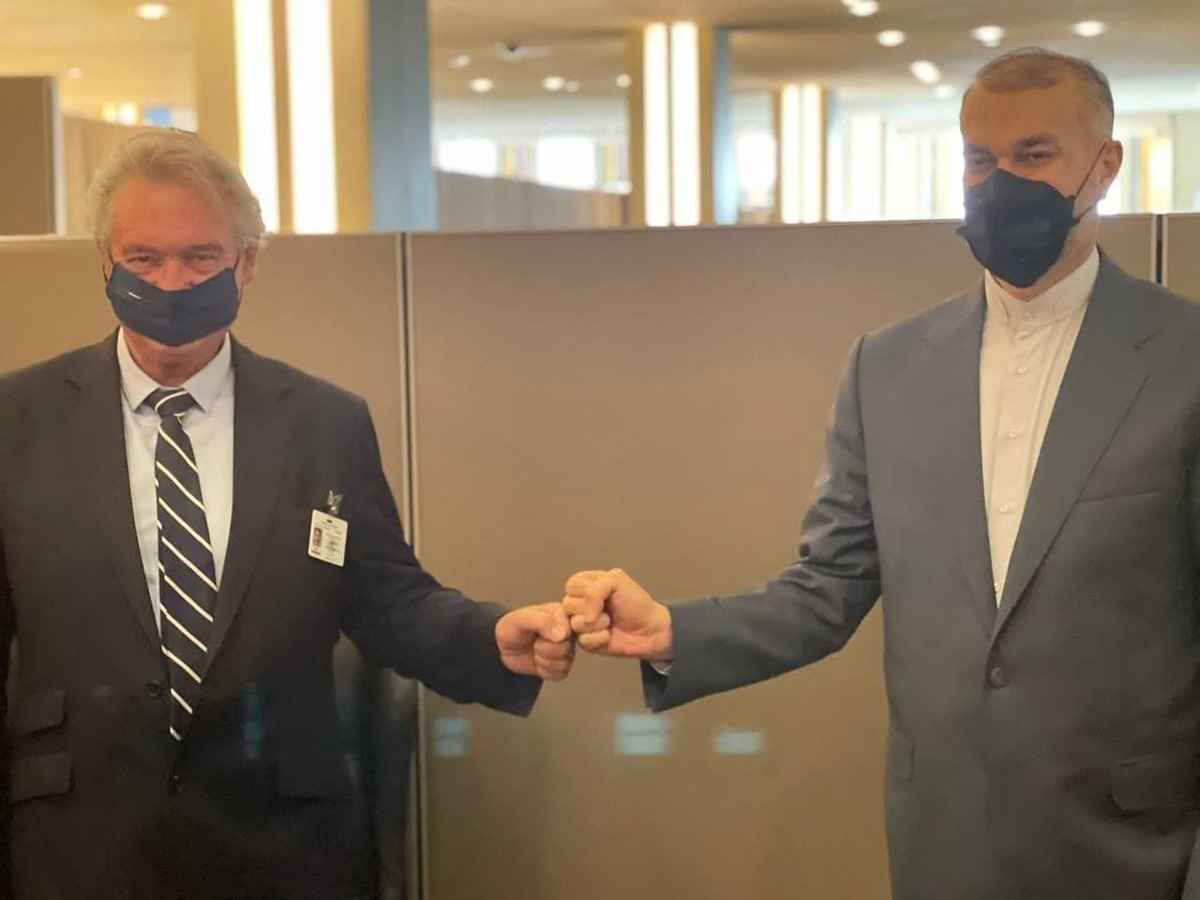 Iran to Return to Vienna Talks

Iran to Return to Vienna Talks as UNGA Facilitates Diplomacy

Foreign Ministry Spokesperson Saeed Khatibzadeh said the Vienna JCPOA negotiations will resume in the “coming weeks.” The last round of Vienna talks ended in June the day after Iran’s presidential election.

Foreign Minister Abdollahian travelled to New York this week for the annual UN General Assembly (UNGA). President Raisi addressed the conference via video, in a speech that harshly criticized the United States.

At the UNGA, Abdollahian met with the foreign ministers of the P4+1 countries, EU High Representative Josep Borrell and his counterparts from other countries. In his meeting with Borrell, Abdollahian said Iran has been “seriously reviewing and studying” the nuclear file under the Raisi administration and will “resume” the negotiations.

Abdollahian told Borrell that Iran is “not delaying for time and does not accept unconstructive behavior from America.” Abollahian said the UK, France and Germany, “instead of pressuring America, the violator of the JCPOA, to return to its commitments,” constantly call for Iran to “hasten to negotiations.”

Abdollahian stated: “If others return to their [JCPOA] commitments and this is verified we will also cease our reciprocal measures.”

Ireland’s foreign minister said after meeting Abdollahian that Iran has a “very clear intent” to return to the nuclear talks.

There was also progress on regional diplomacy, including between Iran and Saudi Arabia, at the UN General Assembly. Bloomberg reported that the Iraqi UN Ambassador “brought together foreign ministers and senior representatives of Iran, Saudi Arabia, Kuwait, Egypt, Qatar, Jordan, Turkey, France, the EU, the Arab League and Gulf Cooperation Council.”

During his UNGA speech, Saudi King Salman expressed hope that direct talks between Iran and Saudi Arabia will improve their relationship. Khatibzadeh also said that Iran has had “very serious negotiations” with Saudi Arabia about Persian Gulf security, and that these talks are continuing at an “appropriate level.”

Khatibzadeh stated: “We think if the monarchical Saudi government pays attention to this message of the Islamic Republic of Iran that the solution to regional problems lie within the region, and we have to reach a broad regional framework, we can have a good and durable relationship between two important regional countries, meaning Iran and Saudi Arabia.”

Rapper Toumaj Salehi was released from prison on bail on September 21st. As covered in last week’s issue of Iran Unfiltered, Salehi was arrested after releasing a song sharply critical of the Islamic Republic and people he deemed its supporters. See here also for NIAC’s statement on Salehi’s arrest.

According to the Human Rights Activists News Agency (HRANA), Salehi’s lawyer Amir Raisian said it was indirectly communicated to Salehi’s father that the charge against his son was “propaganda against the system [state].” Many dissidents in Iran are imprisoned under this charge.

Amnesty International had called for Toumaj’s “unconditional release.” In a tweet, it stated that he was “detained solely for exercising his right to freedom of expression.”

After his release, Salehi posted a video thanking those who called for his release. He said the “people” were his voice when he was detained.

The Tehran prisons administration office has confirmed that prisoner Shaheen Naseri has died while in prison. The office released a statement saying Naseri was in an “emergency condition” when he was taken to the prison’s health center. It said an operation to resuscitate for 45 minutes failed.

In September 2020, Naseri said he had witnessed Navid Afkari, a prisoner who was later executed, being tortured. As documented in Iran Unfiltered, Naseri sent a tape to BBC Persian saying he witnessed Afkari being beaten while he was in a police station in Shiraz.

Authorities denied Afkari was tortured, and he was later executed on charges of murder. Afkari said he was innocent of the charge and that he had confessed to the murder under torture. His case spurred global outcry and condemnation.

Shaheen Naseri’s brother says he was killed while in solitary confinement. The Tehran prisons office did not explain how Naseri ended up in an “emergency condition.” Instead, it said he was a “professional swindler who was arrested eight times.”

According to Radio Farda, Naseri was being held in the Great Tehran Penitentiary on “non-political” charges. According to an Iranian human rights group, Naseri recently had prepared a letter about the one-year anniversary of Afkari’s execution. He wanted to read this letter out loud to an outlet but was taken to solitary confinement before he could do so.

According to Amnesty International, the Iranian government has not given “answers” about 72 people who have died while in prison since January 2010.

Iran Gets Accepted into the Shanghai Cooperation Organization

Iran was accepted to be a member of the Shanghai Cooperation Organization (SCO). President Ebrahim Raisi attended the SCO’s gathering in Tajikistan, where Iran’s request to join was approved by the bloc. Iran has been an observer of the SCO since 2005 and has sought to join since 2007.

The SCO aims to boost economic, cultural, environmental, and security cooperation between its member states. Its founding members in 2001 were Russia, China, Kazakhstan, Kyrgyzstan, Tajikistan, and Uzbekistan.

Pakistan and India were added as permanent members in 2017. The SCO currently comprises 40 percent of the world’s population and 20 percent of global GDP.

Iran’s ascension to the SCO was previously opposed by Tajikistan in 2017. Analysts say the SCO accepting Iran now happened because of a greenlight by China and Russia.

Some Iranian analysts say Iran is joining the SCO to signal that it is not dependent on the results of the JCPOA negotiations and is focused on lowering the impact of U.S. sanctions by boosting ties with neighbors.  However, others say that to maximize the benefit of SCO membership, Iran will need to return to the JCPOA and pass legislation that would bring its banking sector in line with global standards set out by the Financial Action Task Force (FATF).

Iran will not accrue benefits in the short-term from its SCO membership. It will have to undergo a technical process to finalize its membership. For Pakistan and India, this process took two years.