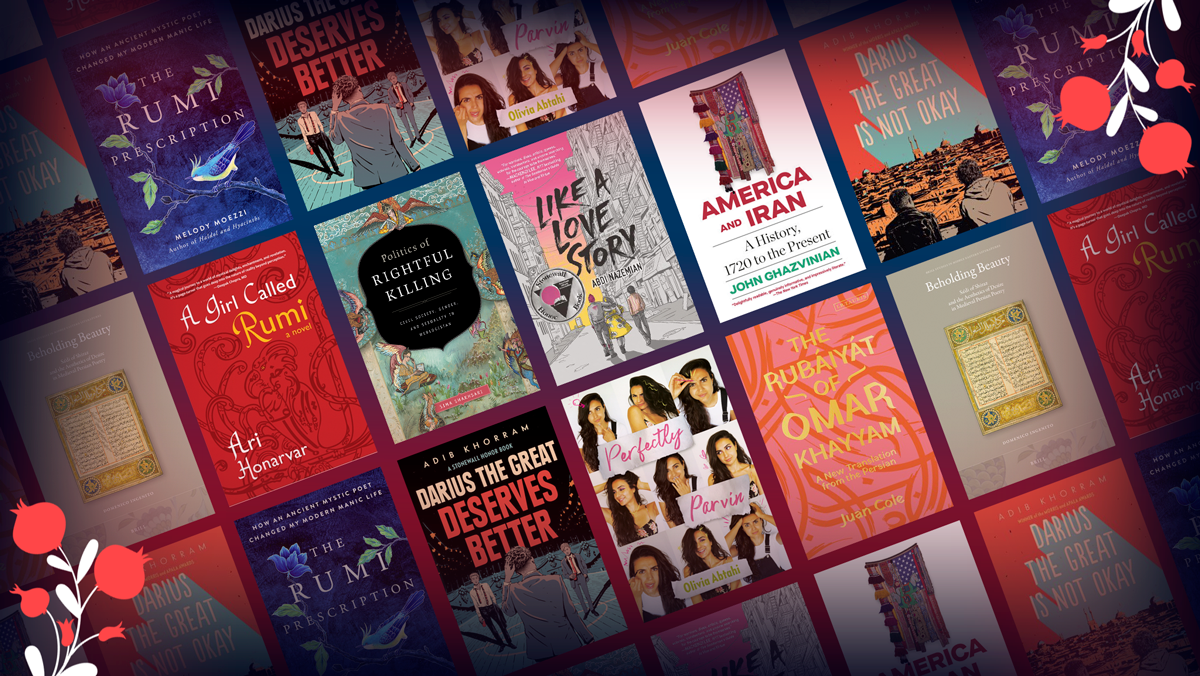 As we reflect on the past year, many of our proudest moments came from showcasing artists, authors, and creatives at book talks, our open mic nights, and community programming. With the holiday season upon us and the new year fast approaching, we thought it would be a perfect time to put together a NIAC Holiday Reading list!

As a gift for a loved one or as a gift for yourself to read and relax on vacation, we’ve got you covered. Check out our selection below! Just click the titles to purchase.

“Parvin Mohammadi has just been dumped–only days after receiving official girlfriend status. Not only is she heartbroken, she’s humiliated. Enter high school heartthrob Matty Fumero, who just might be the smoking-hot cure to all her boy problems. If Parvin can get Matty to ask her to Homecoming, she’s positive it will prove to herself and her ex that she’s girlfriend material after all. There’s just one problem: Matty is definitely too cool for bassoon-playing, frizzy-haired, Cheeto-eating Parvin. Since being herself hasn’t worked for her in the past (see aforementioned dumping), she decides to start acting like the women in her favorite rom-coms. Those women aren’t loud, they certainly don’t cackle when they laugh, and they smile much more than they talk. But Parvin discovers that being a rom-com dream girl is much harder than it looks. Also hard? The parent-mandated Farsi lessons. A confusing friendship with a boy who’s definitely not supposed to like her. And hardest of all, the ramifications of the Muslim ban on her family in Iran. Suddenly, being herself has never been more important. Olivia Abtahi’s debut is as hilarious as it is heartfelt–a delightful tale where, amid the turmoil of high school friendships and crushes, being yourself is always the perfect way to be.”

Want our take on the book? Check out our book review! You can also learn more about Olivia and Perfectly Parvin by watching the recording of our book talk.

2.  The Rubáiyát of Omar Khayyam: A New Translation from the Persian by Juan Cole

“A repository of subversive, melancholic and existentialist themes and ideas, the rubaiyat (quatrains) that make up the collected poems attributed to the 12th century Persian astronomer Omar Khayyam have enchanted readers for centuries. In this modern translation, complete with critical introduction and epilogue, Juan Cole elegantly renders the verse for contemporary readers. Exploring such universal questions as the meaning of life, fate and how to live a good life in the face of human mortality, this translation reveals anew why this singular collection of poems has struck a chord with such a temporally and culturally diverse audience, from the wine houses of medieval Iran to the poets of Western twentieth century modernism.”

You can learn more about the book and Juan’s writing and translation process by watching the recording of our book talk.

3. America and Iran: A History, 1720 to the Present by John Ghazvinian

“In this rich, fascinating history, John Ghazvinian traces the complex story of the relations between these two nations back to the Persian Empire of the eighteenth century—the subject of great admiration by Thomas Jefferson and John Quincy Adams—and an America seen by Iranians as an ideal to emulate for their own government. Drawing on years of archival research both in the United States and Iran—including access to Iranian government archives rarely available to Western scholars—the Iranian-born, Oxford-educated historian leads us through the four seasons of U.S.–Iran relations: the spring of mutual fascination; the summer of early interactions; the autumn of close strategic ties; and the long, dark winter of mutual hatred. Ghazvinian makes clear where, how, and when it all went wrong. America and Iran shows why two countries that once had such heartfelt admiration for each other became such committed enemies—and why it didn’t have to turn out this way.”

Want our take on the book? Check out our book review!

“A Girl Called Rumi, Ari Honarvar’s debut novel, weaves a captivating tale of survival, redemption, and the power of storytelling. Kimia, a successful spiritual advisor whose Iranian childhood continues to haunt her, collides with a mysterious giant bird in her mother’s California garage. She begins reliving her experience as a nine-year-old girl in war-torn Iran, including her friendship with a mystical storyteller who led her through the mythic Seven Valleys of Love. Grappling with her unresolved past, Kimia agrees to accompany her ailing mother back to Iran, only to arrive in the midst of the Green Uprising in the streets. Against the backdrop of the election protests, Kimia begins to unravel the secrets of the night that broke her mother and produced a dangerous enemy. As past and present collide, she must choose between running away again or completing her unfinished journey through the Valley of Death to save her brother.”

You can learn more about Ari and A Girl Called Rumi by watching the recording of our book talk.

5. Beholding Beauty: Sadi of Shiraz and the Aesthetics of Desire in Medieval Persian Poetry by Domenico Ingenito

“Beholding Beauty: Saʿdi of Shiraz and the Aesthetics of Desire in Medieval Persian Poetry explores the relationship between sexuality, politics, and spirituality in the lyrics of Saʿdi Shirazi (d. 1292 CE), one of the most revered masters of classical Persian literature. Relying on a variety of sources, including unstudied manuscripts, Domenico Ingenito presents the so-called “inimitable smoothness” of Saʿdi’s lyric style as a serene yet multifaceted window into the uncanny beauty of the world, the human body, and the realm of the unseen. The book constitutes the first attempt to study Sa‘di’s lyric meditations on beauty in the context of the major artistic, scientific and intellectual trends of his time. By charting unexplored connections between Islamic philosophy and mysticism, obscene verses and courtly ideals of love, Ingenito approaches Sa‘di’s literary genius from the perspective of sacred homoeroticism and the psychology of performative lyricism in their historical context.”

Learn more about Domenico’s research and the themes of homoeraticism in Sa’di’s poetry that he discusses in his book by watching the recording of our Beholding Beauty event.

6. Darius the Great is Not Okay by Adib Khorram

“Darius Kellner speaks better Klingon than Farsi, and he knows more about Hobbit social cues than Persian ones. He’s a Fractional Persian–half, his mom’s side–and his first-ever trip to Iran is about to change his life. Darius has never really fit in at home, and he’s sure things are going to be the same in Iran. His clinical depression doesn’t exactly help matters, and trying to explain his medication to his grandparents only makes things harder. Then Darius meets Sohrab, the boy next door, and everything changes. Soon, they’re spending their days together, playing soccer, eating faludeh, and talking for hours on a secret rooftop overlooking the city’s skyline. Sohrab calls him Darioush–the original Persian version of his name–and Darius has never felt more like himself than he does now that he’s Darioush to Sohrab. Adib Khorram’s brilliant debut is for anyone who’s ever felt not good enough–then met a friend who makes them feel so much better than okay.”

7. The Rumi Prescription: How an Ancient Mystic Poet Changed My Modern Manic Life by Melody Moezzi

“Rumi’s inspiring and deceptively simple poems have been called ecstatic, mystical, and devotional. To writer and activist Melody Moezzi, they became a lifeline. In The Rumi Prescription, we follow her path of discovery as she translates Rumi’s works for herself – to gain wisdom and insight in the face of a creative and spiritual roadblock. With the help of her father, who is a lifelong fan of Rumi’s poetry, she immerses herself in this rich body of work, and discovers a 13th-century prescription for modern life. Addressing isolation, distraction, depression, fear, and other everyday challenges we face, the book offers a roadmap for living with intention and ease, and embracing love at every turn–despite our deeply divided and chaotic times. Most of all, it presents a vivid reminder that we already have the answers we seek, if we can just slow down to honor them.”

You can also purchase a signed copy of the book here.

“It’s 1989 in New York City, and for three teens, the world is changing. Reza is an Iranian boy who has just moved to the city with his mother to live with his stepfather and stepbrother. He’s terrified that someone will guess the truth he can barely acknowledge about himself. Reza knows he’s gay, but all he knows of gay life are the media’s images of men dying of AIDS. Judy is an aspiring fashion designer who worships her uncle Stephen, a gay man with AIDS who devotes his time to activism as a member of ACT UP. Judy has never imagined finding romance…until she falls for Reza and they start dating. Art is Judy’s best friend, their school’s only out and proud teen. He’ll never be who his conservative parents want him to be, so he rebels by documenting the AIDS crisis through his photographs. As Reza and Art grow closer, Reza struggles to find a way out of his deception that won’t break Judy’s heart—and destroy the most meaningful friendship he’s ever known. This is a bighearted, sprawling epic about friendship and love and the revolutionary act of living life to the fullest in the face of impossible odds.”

“In the early 2000s, mainstream international news outlets celebrated the growth of Weblogistan—the online and real-life transnational network of Iranian bloggers—and depicted it as a liberatory site that gave voice to Iranians. As Sima Shakhsari argues in Politics of Rightful Killing, the common assumptions of Weblogistan as a site of civil society consensus and resistance to state oppression belie its deep internal conflicts. While Weblogistan was an effective venue for some Iranians to “practice democracy,” it served as a valuable site for the United States to surveil bloggers and express anti-Iranian sentiment and policies. At the same time, bloggers used the network to self-police and enforce gender and sexuality norms based on Western liberal values in ways that unwittingly undermined Weblogistan’s claims of democratic participation. In this way, Weblogistan became a site of cybergovernmentality, where biopolitical security regimes disciplined and regulated populations. Analyzing online and off-line ethnography, Shakhsari provides an account of digital citizenship that raises questions about the internet’s relationship to political engagement, militarism, and democracy.”