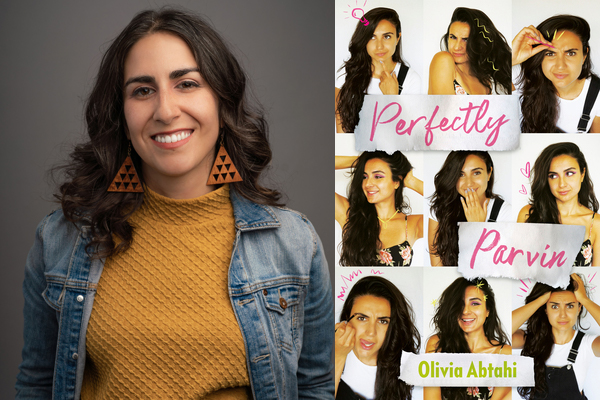 In her debut novel, Perfectly Parvin, author Olivia Abtahi tells the story of 14-year-old Parvin Mohammadi, a second-generation Iranian American who navigates the trials of adolescence with the added complexity of growing up with different cultures. Growing up in the U.S. with an Iranian father and an Argentine mother, Abtahi herself is a reflection of the increasingly diverse Iranian diaspora. A filmmaker and writer, Abtahi weaves together a story that is not only fun to read, but is also a moving coming of age story fit for our times.

With an Iranian father and American mother, Abtahi’s central character, Parvin, must grapple with her dueling identities, the growing pains of youth, and exploring a sense of belonging in a political and social climate that is too often hostile to her Iranian heritage. We follow young Parvin through the excitement and sorrow of learning about love, family, and friendship. Though Parvin’s Iranian identity is not the crux of the story, as many Iranian Americans—and immigrants of all backgrounds—can surely attest to, her culture and heritage run as an important thread throughout the novel.

In some cases, the reader is subtly reminded of Parvin’s Iranian identity, like when she quips about hair removal and enjoys Persian food with her friends. However, at other times, we are reminded of the challenges Iranian Americans experience in the face of political turmoil between the U.S. and Iran, the discriminatory impact of the Muslim ban, and the rising bigotry of Islamophobia and anti-Iran sentiment among some Americans. Of course, in the era of Trump, these experiences were not unique to the Iranian-American community, many disenfranchised groups felt a similar, if not worse, sense of insecurity.

Abtahi is able to explore these microaggressions and uncertainties in a way that does not take away from the simple story of a young girl, just trying to figure out who will ask her to the homecoming dance. Notably, Abtahi introduces central characters that are queer, a topic Iranian Americans are only beginning to discuss openly. In this sense, Abtahi presents a full spectrum of characters that reflect the diverse reality of contemporary American society.

At the same time, Parvin’s Farsi classes introduce the reader to a cross section of the Iranian diaspora that, despite their many differences, find commonality in their shared heritage and the desire to maintain their language and culture for future generations. Abtahi also includes a view of Iran through Parvin’s close relationship with her Ameh Sara who lives there with her family.

That Abtahi is able to bring together these various threads in a story that is both lighthearted and affecting is no small accomplishment. Perfectly Parvin is a book that anyone can enjoy reading, from all ages and backgrounds, but it is especially valuable to young Iranian Americans who have rarely seen characters relatable to themselves. Whereas, Iranian Americans often see their country of heritage and their own depictions as caricatures, Abtahi provides a story and characters that reflect the lived experience of our community and reminds us of the simple meaning of being seen and understood.

Get your copy today!