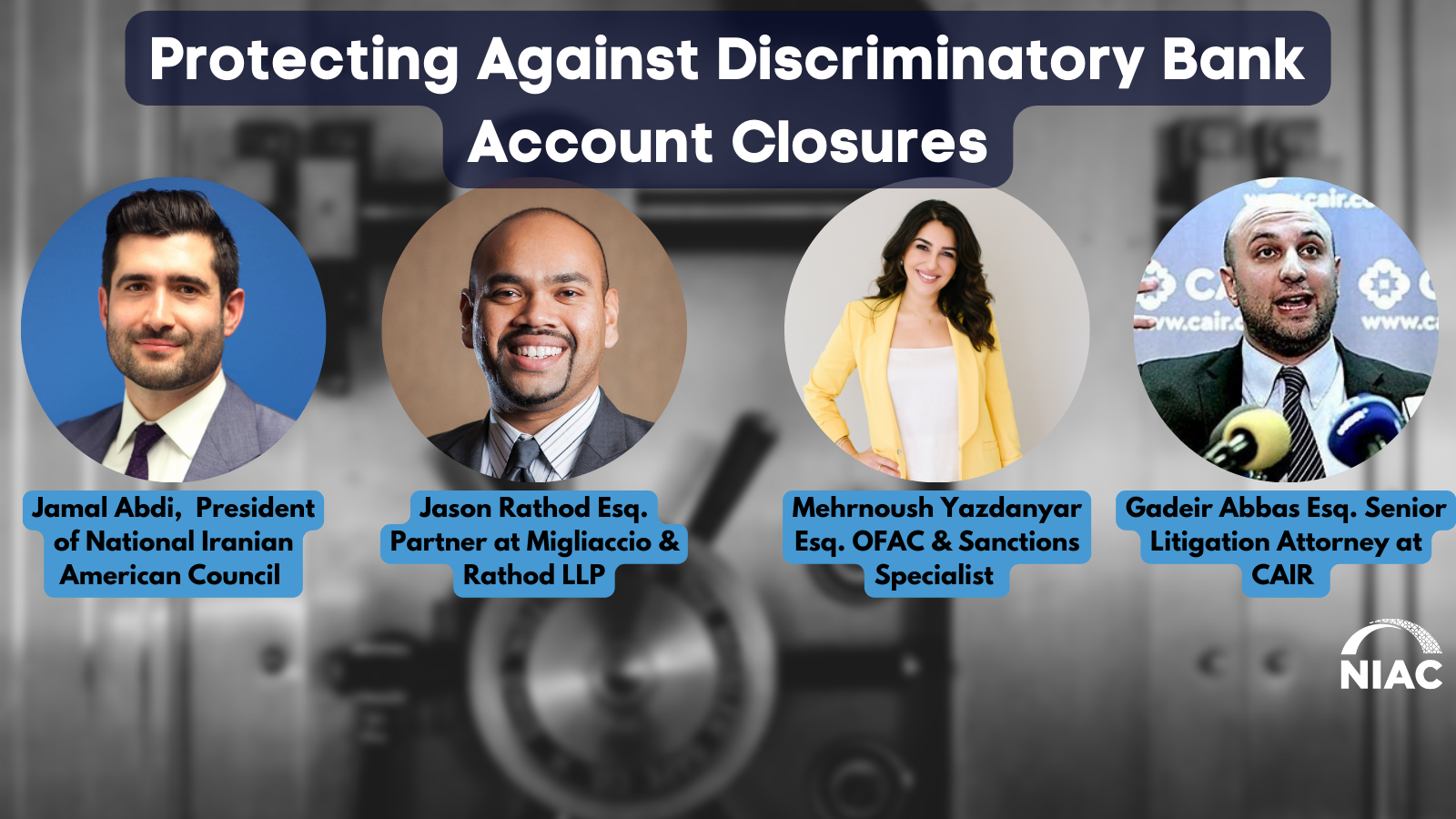 “In some cases, it is [based on] nothing, it’s basically their name, they’ve done everything correctly. They weren’t sent anything and their account was closed,” says Mehrnoush Yazdanyar, Esq. Yazdanyar was speaking on the National Iranian American Council’s expert panel exploring why banks have targeted so many individuals of Iranian heritage and other minority communities with discriminatory account closures. This is an issue that NIAC has been pushing back on and working to stop for years. While some account closures occur out of the blue, Yazdanyar shared that, more often than not, bank account disruptions often occur due to a specific trigger point. Some common trigger points include a foreign wire transfer, general large transfer of funds, or an unanswered letter from the bank requesting specific information – such as residency.

These experiences aren’t exclusive to the Iranian-American community. “It is clear to us that banks are reacting to the federal law enforcement’s perception of where the threats are, who’s dangerous, and what’s suspicious. And there is definitely a policy infrastructure that focuses people’s attention on Iranian Americans and on Muslims,” stated Gadeir Abbas Esq., a Senior litigation attorney at Council on American Islamic Relations.

Yazdanyar noted that the causes of the account closures are manifold, but stem from extraordinarily complicated federal regulations that banks are then required to enforce. In the case of Iran, sanctions prohibit banks from servicing individuals inside of Iran or those deemed “ordinarily resident” in Iran. Due to these regulations, banks appear to have made the calculation that it is easier to drop many of its customers of certain nationalities or backgrounds than to service them and incur sanctions risk. During the panel, some attendees  asked Yazdanyar about banks asking their clients about dual citizenship or if they own property in sanctioned countries, like Iran. “You’re absolutely not required to answer any of that,” says Mehrnoush. The only information financial institutions must have is where you are residing as that impacts their ability to service you.

Historically, financial institutions have over-enforced sanctions without facing repercussions. Yet, a recent class-action lawsuit filed by Migliaccio & Rathod LLC against Bank of America on behalf of an Iranian national living in California illustrates a new tide. Bank of America aimed to have the suit dismissed by citing necessary compliance with sanctions against Iran, but the claim was denied. The lead on the lawsuit, Jason Rathod Esq, joined the panel and noted that the individual had complied with their residency requests and still had his account closed. The court dismissed Bank of America’s motion to dismiss, which Rathod argued was evidence of the core validity of the lawsuit and that financial institutions need to comply with their regulations without resorting to discriminatory behavior.  “With the class action lawsuit what we can achieve is primarily a change in practices with Bank of America so that they can… comply with whatever laws they need to but do so in a nondiscriminatory manner,” said Rathod.

While the class-action lawsuit is a first step in deterring financial institutions from overenforcement, the federal government must take action to curb this issue, including clarifying their sanctions and allowing some limited banking on Iranian soil. “The government can very easily issue a general license that says if someone is traveling to Iran and if they notify their bank and provide proof that they are still residing in the U.S.,” claimed Mehrnoush.