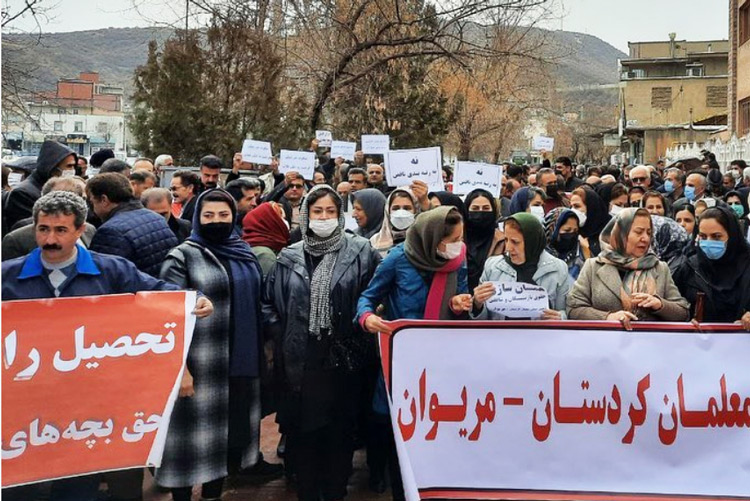 Crackdown on Teacher’s Demonstrations in Iran

As we witness labor movements in the U.S. and around the world calling for fair wages and better working conditions, Iran is no exception. In Iran, the combination of mismanagement, corruption, and punishing U.S. sanctions have devastated middle-class and working-class Iranians who struggle to make a living in a battered economy. Adding insult to injury, Iranian workers are stripped of their basic rights as their protests are met with suppression and arrests by Iranian security forces.

Despite the obstacles they face, Iranian teachers have shown their ability to organize and demonstrate across the country for years, demanding fair wages and benefits, protection of their right to assemble, an end to discrimination in the education system, and the release of jailed teachers and labor activists. In recent weeks, teachers across Iran held organized demonstrations, reiterating these demands and the release of their colleagues. In fact, labor protests across different sectors have seen a surge in Iran over the last four years as economic conditions have continued to get worse.

In a statement on May 5th, Human Rights Watch echoed the demands of Iranian teachers for the immediate and unconditional release of jailed teachers and labor activists. As HRW notes, not only have activists been detained but prominent members of the teacher’s unions have received harsh prison sentences on spurious charges such as “spreading propaganda against the state” and “assembly and collusion against national security.” NIAC joins these calls demanding the release of teachers and labor activists, and the protection of their right to assemble. Workers in all sectors are the backbone of any nation, it’s time to give them the protections and respect they deserve.