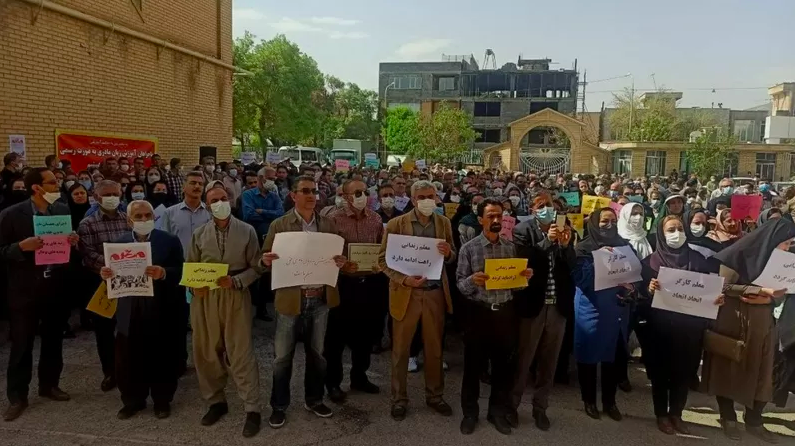 School teachers held demonstrations across Iran on April 21. Mohammad Habibi, the spokesperson for the main teacher’s union, said 70 teachers have been arrested, 40 of which were women and 30 were men. But he said they were later released.

Habibi added that the teachers rallied in many cities but were prevented from staging a demonstration in Tehran due to the heavy presence of security forces. Videos posted on social media showed security forces blocking the route to the central building of the Ministry of Education in the capital city.

The teachers were protesting the arrests of their colleagues in previous demonstrations as well as low wages and a lack of educational resources. Over the past several years, teachers in Iran have held many coordinated countrywide demonstrations.

One of the official demands of the teachers is the implementation of a recent law that allocated different levels of pay for teachers based on their experience. Teachers also demand implementation of an article of the Iranian constitution that guarantees free education for all.

Some activist teachers said the internet service on their cell phones was cut off during the demonstration. They blamed the Telecommunication Company of Iran for collaborating with security forces to disconnect their phones from the internet.

UN Official to Investigate Impact of Sanctions on Iranians

Alena Douhan, the UN Special Rapporteur on Negative Impact of Unilateral Coercive Measures on Human Rights, will visit Iran on May 7-18. She said her trip is aimed at assessing the impact of unilateral sanctions on the human rights of ordinary Iranians.

While visiting Iran, Douhan will visit the heads of international and regional organizations, financial institutions, and non-governmental groups. The UN Human Rights Council has also put out a “call for input” to inform the Douhan’s visit to Iran.

The questions put out by the council include: What specific human rights are affected by unilateral sanctions introduced against Iran? What types of sanctions have the most negative impact on the enjoyment of human rights in Iran?

IRGC Naval Commander has said Iran will not drop plans to avenge the late IRGC commander Qassem Soleimani. Soleimani was assassinated in a U.S. drone strike in Jan. 2020 at the Baghdad International Airport along with nine others.

Tangsiri alleged that the U.S. has proposed to Iran that it abandon plans for retaliation in exchange for some sanctions relief. This is similar to a March 30 report from the U.S.-funded Radio Farda that said the U.S.’s condition for lifting the designation of the IRGC as a terrorist organization—a key hurdle in the negotiations to restore the JCPOA—is that Iran abandon retribution plans for Soleimani’s assassination.

Tangsiri said that Iran has rejected the alleged U.S. offer. He said Iran will avenge Soleimani’s assassination at a “time and place” of its choosing.

Meanwhile, the U.S. appears to have drawn a hard line against delisting the IRGC as part of any agreement to restore the JCPOA. A State Department spokesperson said on April 21 that “if Iran wants sanctions lifting that goes beyond the JCPOA, they will need to address concerns of ours beyond the JCPOA.”

Iran’s Foreign Minister Hossein Amir-Abdollahian said this week that Iran “does not pay attention to maximalism” from the other side. He added that Iran would not cross its “redlines” but also struck a note of optimism, saying that “we have not gone far away from a good and sustainable deal.”