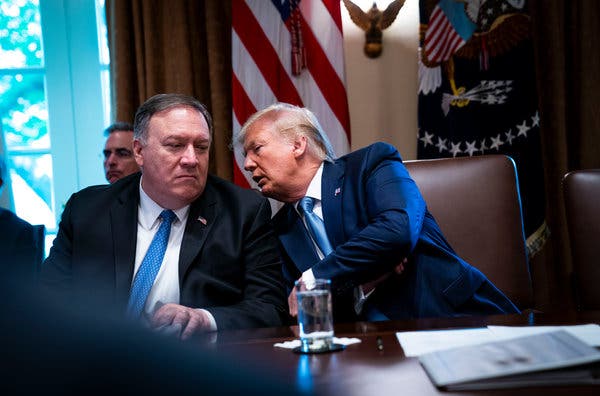 WASHINGTON, D.C.—Today, the National Iranian American Council (NIAC) has launched a bold new report detailing how the U.S. could end the failing maximum pressure campaign against Iran and return to and build on the Joint Comprehensive Plan of Action (JCPOA), or Iran nuclear deal. As the report outlines, the President maintains authority to waive sanctions and rejoin the JCPOA, which is necessary to halt a drift toward war and resolve conflicts through negotiations.

Once the nuclear crisis is stabilized, the report outlines how the U.S. could pursue a joint communique with Iran that establishes multiple negotiating tracks on issues of mutual concern – including those aimed at ending proxy war in the Middle East and stabilizing regional security. Through the steps outlined in the report, a potential Biden administration could quickly restore diplomatic gains that have nearly been squandered, all while setting the stage for further diplomatic breakthroughs with Iran.

“With the revelation that John Bolton and the architects of ‘maximum pressure’ never intended the policy to yield negotiations, and with the Trump administration headed into an embarrassing defeat at the UN in its attempt to snap back Iran sanctions, it’s clearly time for a reset. While Biden has publicly committed to return to the Iran nuclear deal if elected, the devil is in the details and this report offers a blueprint for how a new administration can secure a historic win in its opening weeks — or how a new Trump administration can rightside it’s failing approach to Iran and the region.”
– Jamal Abdi, NIAC President

“The past three and a half years have proven critics of the Iran nuclear deal wrong – sanctions and military threats have not secured U.S. interests and nearly led us into a catastrophic regional war. Rejoining the Iran nuclear deal will not erase all of the damage of the so-called maximum pressure campaign, but it would go a long way toward ending the risks of war and reestablishing American diplomatic credibility around the world.”
– Ryan Costello, NIAC Policy Director

“Hostile relations with Iran have dogged U.S. presidents for over 40 years. As this report explains, a new U.S. approach to Iran is possible and can help stabilize the region and extricate the U.S. from its conflicts. The next administration has the opportunity to forge lasting U.S.-Iran peace by pursuing broad diplomatic engagement with Iran on a host of issues. It is clear that the pressure-only track has failed and setback Americans interests, it’s time to explore creative ways to find common ground with Iran.”
– Sina Toossi, NIAC Senior Research Analyst

“The Iran nuclear deal was a historic achievement for global diplomacy and non-proliferation. At its core, the ‘Maximum Pressure’ policy has failed because it moved the U.S. from a position of global leadership to a position of world pariah. Returning to that point of success is a first step in a path towards reconciliation and securing not just U.S. national interests, but global security. The deal already proved that war could be averted and real diplomacy achieved through careful negotiations, now it is not a question of viability, but choice.”
– Dr. Assal Rad, NIAC Senior Research Fellow

Expert Reactions to “Returning to and Building on the Iran Nuclear Deal: A ‘Maximum Pressure’ Exit Strategy”

“This excellent report lays out, plausibly and with admirable detail, the way to rescue U.S.-Iranian relations from the dangerous dead end to which the Trump administration’s policies have led.  Political candidates will be well advised to give this report close attention.”
-Paul Pillar, retired CIA officer & senior fellow at Georgetown University’s CSS

“NIAC’s ‘Maximum Pressure Exit Strategy’ defines a path back to a rejuvenated nuclear agreement with Iran, to resolution of other critical issues between Washington and Tehran and, ultimately, to a better relationship–a sine qua non for preventing another disastrous U.S. war in Southwest Asia and, as importantly, in restoring stability to the wider region now wracked by wars in Syria, Afghanistan, Libya, Yemen, and serious unrest in Iraq.

It also points the way to a rehabilitation of America’s reputation for trustworthiness in the world–a reputation almost in shambles after Iraq, torture, a disastrous Libya campaign, a far from successful effort in Afghanistan, too much dithering and indecisiveness in Syria, and truly brutal treatment of our European allies and others since we violated the JCPOA.  In short, this NIAC plan would be an excellent beginning to restoring America’s health, the region’s and to an extent the globe’s.
– Larry Wilkerson, Col, USA (Ret), former chief of staff to Secretary of State Colin Powell

“Far from offering a ‘better deal’, the Trump administration’s policy of maximum pressure policy is a recipe for further tension and conflict in the Middle East. This report charts a realistic path for the return of sanity to US-Iran interactions.”
– Farideh Farhi, Independent Scholar and Affiliate Graduate Faculty at the University of Hawai’i at Manoa

“Everyone in government and all concerned citizens must read this essential report on what is wrong with US Iran policy and how it can be fixed.”
-Juan Cole, Richard P. Mitchell Collegiate Professor of History at the University of Michigan