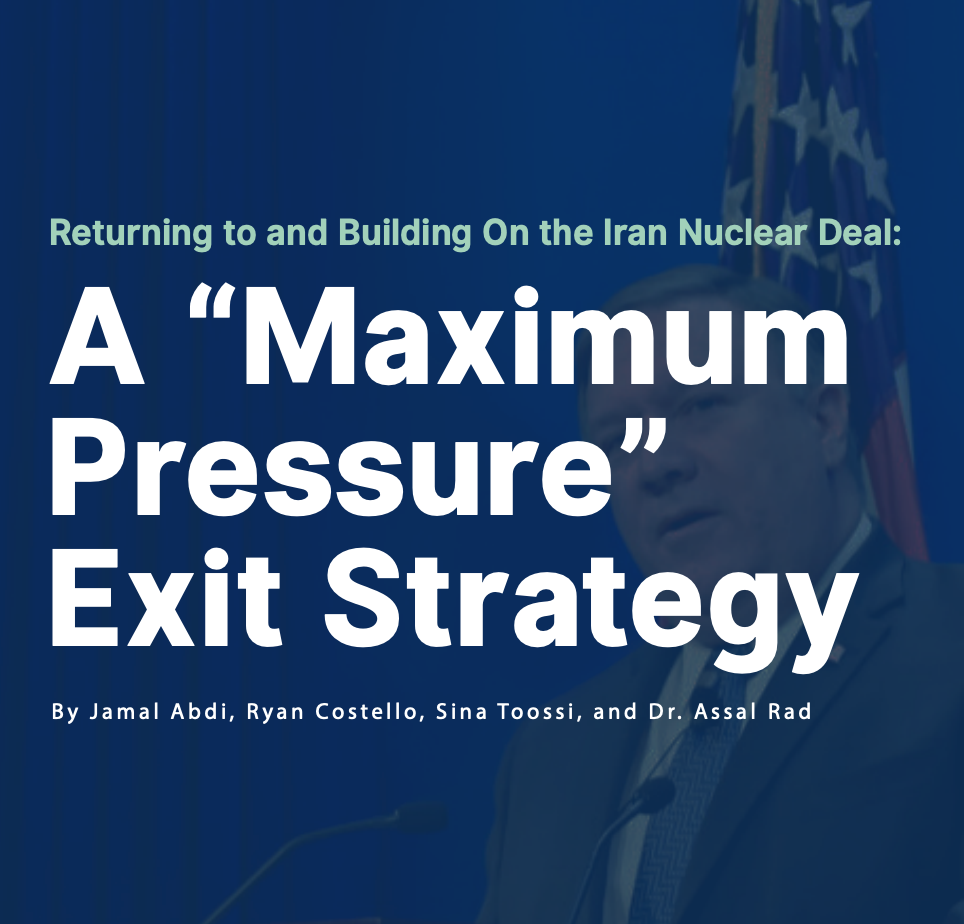 A Maximum Pressure Exit Strategy: Returning to & Building on the Iran Nuclear Deal

In November 2018, we warned that President Trump’s decision to abandon the Iran nuclear agreement had substantially damaged U.S. national security interests, credibility with allies, and global leadership.[1] To mitigate the long-term damage to the U.S. and salvage the nuclear accord, our previous report urged lawmakers and Presidential contenders to announce their commitment to returning the United States to compliance with its obligations under the Joint Comprehensive Plan of Action (JCPOA)—the nuclear agreement between the U.S., Iran, and other major world powers.

Over a year later, the recklessness of President Trump’s abrogation of the multilateral accord and implementation of a go-it-alone ‘maximum pressure’ strategy toward Iran has only become clearer. However, rather than shift its approach, the administration appears poised to engage in further diplomatic sabotage as it enters what may be its final stretch in office. The administration has threatened that if the UN Security Council does not approve the extension of a UN arms embargo on Iran that is scheduled to lapse in October 2020 — which would violate the JCPOA — the U.S. will seek to “snap back” all previous UN sanctions on Iran. That the United States is completely isolated among the permanent members of the Security Council in charting this course, and will likely be blocked from executing this gambit, is representative of just how far America has fallen since it led global efforts on Iran under the previous administration that produced the JCPOA. Even if the Trump administration fails to deliver a fatal blow to the JCPOA, a failed push for snapback is likely to further diminish U.S. global leadership and diplomatic efforts to resolve challenges with Iran. 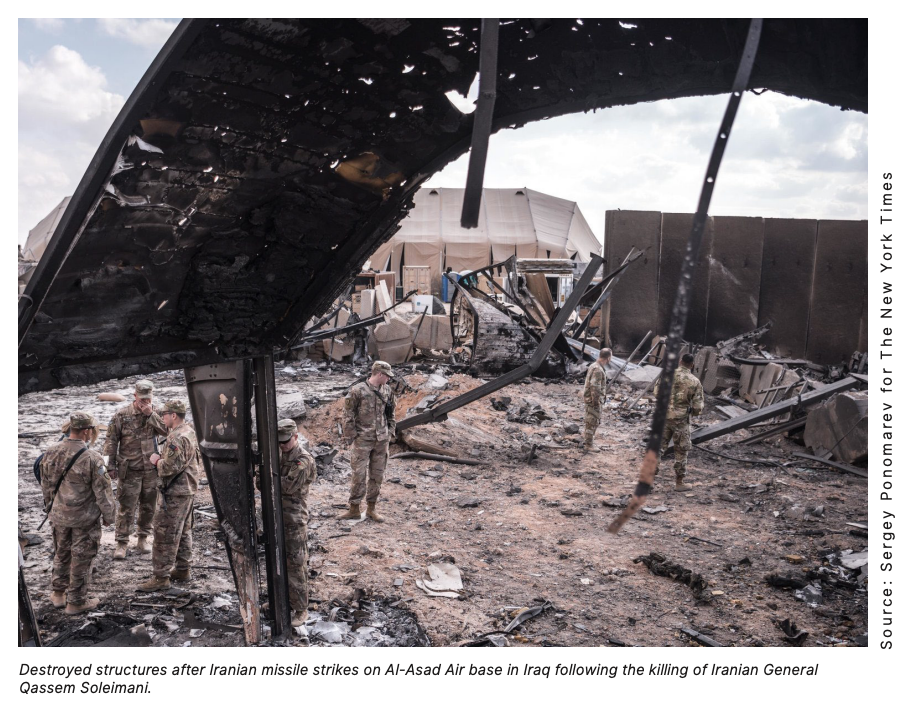 The Trump administration’s approach has already led the U.S. right to the edge of a disastrous regional war with Iran on two separate occasions. In June 2019, President Trump reportedly ordered U.S. forces to strike Iran following Iran’s downing of a U.S. drone operating near or in Iranian airspace. Fortunately, President Trump pulled back ten minutes before the strike was to proceed, according to his account. Had the strike proceeded, the U.S. could well be in the middle of a major regional war right now, as Iran indicated it would have responded to an attack on Iranian soil by seeking to inflict “significant harm” on the U.S. and supporting countries to deter a future attack.[2]

On January 2, 2020, the shadow of war loomed darker still. Amid a tit-for-tat spiral with Iraqi Shia militias backed by Iran, President Trump ordered the assassination of one of Iran’s most prominent officials, Quds Force General Qassem Soleimani, near Baghdad International Airport. That decision, undertaken without any clear evidence that Soleimani was planning imminent attacks on U.S. forces and raising serious questions regarding the strike’s domestic and international legality, ratcheted tensions up to a fever pitch. The Iranian government vowed revenge for what it deemed an act of war and used Soleimani’s “martyrdom” to drum up national support, marking three days of public mourning with widely-attended events across the country.

On January 8th, Iran fired more than a dozen missiles at bases housing U.S. forces in Iraq after reportedly warning the Iraqi prime minister. The strikes did not kill any U.S. service members, therefore not crossing President Trump’s publicly-stated “red line” despite Iran’s willingness to risk such an outcome. President Trump chose not to directly escalate any further and had relented in prior days on his threat to bomb fifty-two sites inside Iran, including sites of cultural significance – a war crime. Full-blown war, on the eve of pandemic, was only narrowly avoided.

While President Trump treated the lack of fatalities from the airstrikes as an opportunity to de-escalate, many analysts predict that Iran will play the long game in seeking revenge for Soleimani. Moreover, there have already been victims of this mindless military escalation. Over a hundred U.S. service members have been treated for concussions and traumatic brain injuries stemming from the Iranian airstrikes. And, tragically, in the tense aftermath following the airstrikes, the Islamic Revolutionary Guard Corps mistakenly shot down a civilian airliner and killed 176 innocent people and sought to cover it up.

While the January crisis may have been contained, the shadow of war continues to loom over the region – even as the U.S., Iran and broader world contend with the devastating impact of the COVID-19 pandemic. The situation in Iraq and the Persian Gulf remains tense, and the status quo is unsustainable. Any escalatory incident – instigated by Iran, the U.S., Saudi Arabia, Israel, or non-state actors – risks sparking a messy war across multiple theaters and involving numerous actors at a time of great global uncertainty. Such risks would be remote had President Trump not made the decision to violate the JCPOA and pursue “maximum pressure.”

Yet even if the worst case of war continues to be avoided, there have been other damaging consequences to the Trump administration’s pressure campaign.

Even before the COVID-19 pandemic that has exacerbated the cruelty of U.S. sanctions and the vast shortcomings of Iran’s government, the Iranian people were caught between their own government’s repression and corruption and crushing U.S. economic sanctions with no respite in sight. Trump’s withdrawal from the JCPOA and his escalation of economic pressure empowered Iran’s hardliners and the Iranian state’s own security apparatus, undermined Iranian moderates’ ability to push for internal reform, and intensified popular discontent from increasingly impoverished quarters. This manifested itself in the Iranian government’s brutal suppression of protests in November 2019 following the government’s termination of gas subsidies, which was coupled with a widespread Internet shutdown.

While elements of the U.S. government touted the protests as a sign of the success of maximum pressure, the massacre was not a sign of a sound U.S. strategy. If the Trump administration truly seeks a “change of behavior” by Iran’s government toward greater accommodation and compromise both internally and externally, the current strategy is an abject failure. ‘Maximum pressure’ has helped facilitate a further radicalizing of Iran’s internal policies and is ushering in a near-total consolidation of power by the most hardline and repressive forces inside Iran. Sanctions and military threats have damaged Iran’s middle class and undermined opportunities for organic and grassroots-led civil society movements to push for sustainable internal change. Moving forward on the present course will not benefit the Iranian people and puts a government that truly reflects their aspirations further out of reach, all while undermining U.S. security interests across the region. 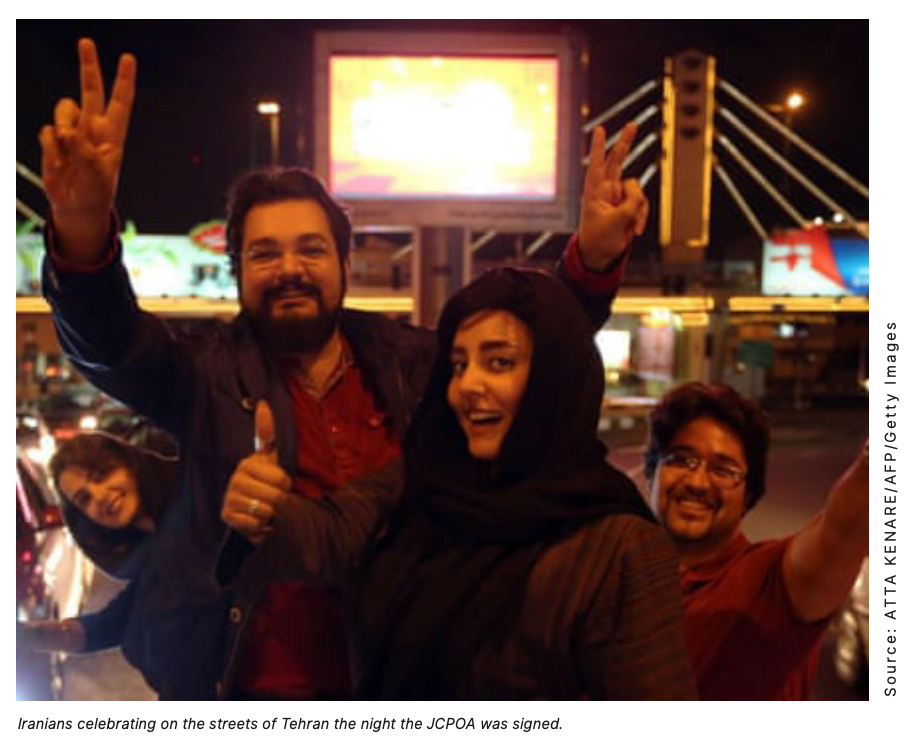 In a further indictment of the current U.S. policy, Iran began halting compliance with aspects of its own commitments under the JCPOA beginning in May 2019 on the one-year anniversary of the U.S. breach of the accord. This decision had been preceded by two additional significant escalations by the United States: the Trump administration’s designation of Iran’s Islamic Revolutionary Guard Corps as a foreign terrorist organization (FTO), and its termination of waivers to remaining foreign importers of Iranian oil. At the time of publication, Iran has halted compliance with limits on the accumulation of heavy water, its level of enrichment and enriched uranium stockpile, its research and development of more advanced centrifuges and its proliferation-sensitive work at the Fordow facility. The tight restrictions provided by the JCPOA have thus predictably begun to fray, as Iran credibly argues it is no longer bound to fully abide by its commitments under the accord given that reciprocal commitments on sanctions relief have not been implemented.

In theory, Trump could still recognize the danger of the Iran strategy he has adopted and chart a new course on Iran policy that stabilizes or builds on the original bargain of the JCPOA. Iran has continued to indicate that if the U.S. suspends sanctions imposed following Trump’s abandonment of the nuclear accord, Iran would return to compliance with its obligations under the JCPOA and agree to further negotiations.[3] The two sides came close to such an agreement during the 2019 UN General Assembly, according to Iranian President Hassan Rouhani, with the key stumbling block reportedly being the sequencing of sanctions removal.[4]

However, this has become far more difficult in 2020 given the events outlined above. As the U.S. Presidential election grows closer and the Trump administration continues to tout its failing approach toward Iran, the likelihood that both Washington and Tehran see the mutual benefit in new negotiations before November grows more remote.

Fortunately, there is growing consensus outside of the White House that the current Iran policy is sabotaging U.S. interests and threatening to push the U.S. toward war. All the top contenders for the Democratic nomination for President publicly voiced their support for returning to compliance with the JCPOA.[5] The presumptive Democratic nominee, former Vice President Joe Biden, has committed to restore U.S. compliance with its JCPOA commitments provided that Iran does the same.[6]

Returning to compliance is a wise position for Biden. A JCPOA return would ensure a new administration would not inherit a major, pressing crisis regarding Iran’s nuclear program. Lifting re-imposed U.S. sanctions would also shore up America’s badly diminished credibility with allies in Europe, who have sought to hold the line on the agreement in the face of fierce U.S. pressure. It would offer hope to the Iranian people, who celebrated the deal in 2015 but are now suffering directly as a result of Trump’s abandonment. A JCPOA return would begin to restore U.S. leverage with Iran, which has been completely diminished by President Trump’s ever-escalating and disjointed use of sanctions, threats of military force, and global isolation. And, a JCPOA return would serve as a strong opening position to resolve the myriad conflicts in the region and reduce the heavy American military footprint there.

A Biden administration would not be able to punt on this issue. Within the opening months of 2021, a new administration would either have to facilitate a mutual JCPOA return or accept an Iranian nuclear program that crosses the threshold of “undetectable breakout capability.” Furthermore, the current Rouhani government will only have months left in office before Iran’s presidential elections in May or June. Given Iran’s political trajectory since Trump’s nuclear deal abrogation, that election may usher in a hardline administration that is uninterested in negotiations and repeating the humiliating path of its predecessor if the nuclear accord is dead. Given the enormous amount of diplomatic energy and creativity expended by the Obama administration on the nuclear issue over the course of two terms, it would be profoundly unwise to complicate or re-open the crisis when a ready solution exists. If a new administration continues the Trump administration’s approach to Iran or seeks to place conditions on a return to the JCPOA, it would risk a complete – and more rapid – nuclear breakdown in its first months in office. The far superior alternative is to relieve sanctions in line with U.S. commitments and ensure that Iran restores compliance with its nuclear commitments. That is a process that should begin on Day 1 of a new administration.

Opponents of the JCPOA have failed to articulate a coherent argument against returning to compliance with the deal, nor have they offered any plausible alternative to achieve a better deal so long as the U.S. violates the original bargain. While critics have and will continue to point to ‘sunsets’ in the JCPOA when some of its restrictions expire, Trump has had ample time to seek to address them from outside the deal and appears poised to come up catastrophically empty.

Our first report detailed the case for returning to the JCPOA, which is now not only a politically viable possibility but is a probability should Biden win the Presidency. This second report seeks to answer the question of how the United States can do so, while putting forward an affirmative vision so that the JCPOA becomes the baseline for a more durable and impactful policy toward Iran and the Middle East.