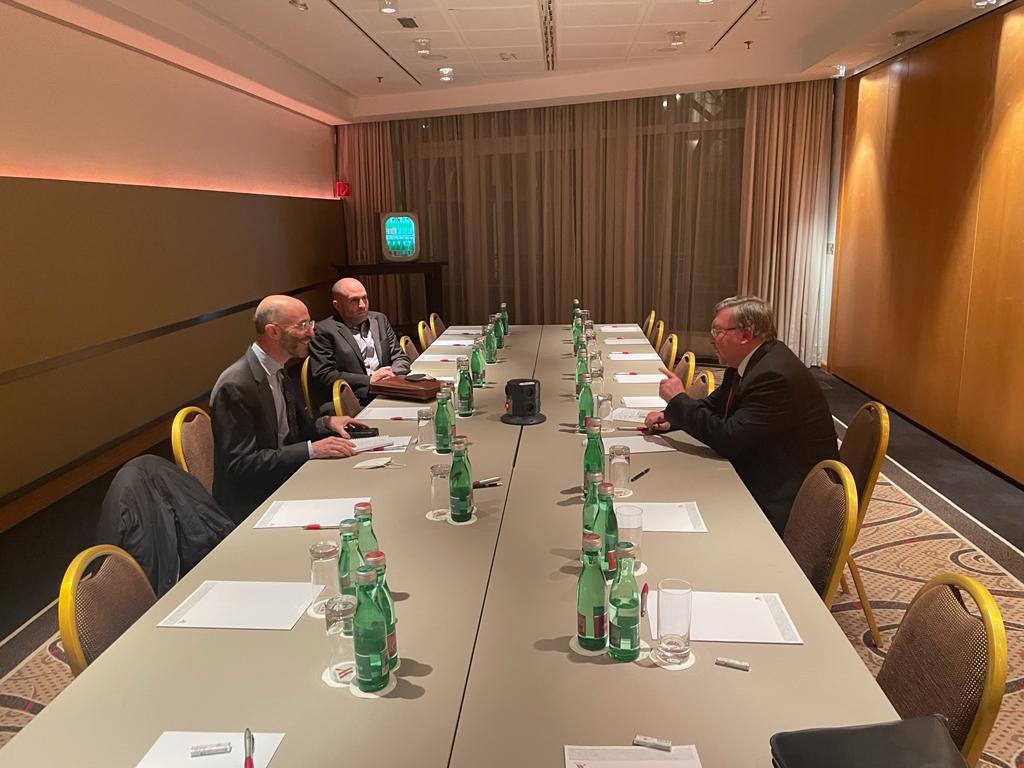 The eighth round of the Vienna negotiations to restore the JCPOA resumed on January 3rd. Diplomats from the U.S., Iran, and Russia have said there has been progress in the negotiations.

State Department Spokesperson Ned Price said on January 4th there has been “modest progress” which the sides “hope to build on” this week. However, Price added that “if we do not soon reach an understanding on mutual—on a mutual return to compliance, Iran’s accelerating nuclear steps will increasingly diminish the nonproliferation benefits of the JCPOA.”

Iran’s top negotiator at the talks Ali Bagheri says there has been “progress on the issue of sanctions lifting.” He said the 8th round of negotiations has been “positive so far.”

Russia’s envoy at the talks Mikhail Ulyanov also described the talks as making progress. Ulyanov told Russia’s Tass News Agency that it is now “clearer where the main stumbling blocks are.”

The issue of the U.S. and its allies putting a deadline on the negotiations has become a point of contention with Iran. Officials from the U.S. and its European allies have said that there are “weeks, not months” to restore the JCPOA before Iran’s nuclear advances erode the nonproliferation value of returning to the deal.

According to a report by Politico, some officials “close to the talks” say the window to return to the deal will “close by the end of January or the beginning of February.” However, the report adds that other officials claim there is no fixed date.

British Prime Minister Boris Johnson has also said that “time is running out to reach an agreement.” U.S. Secretary of State Anthony Blinken has made this warning many times since last summer.

In response, Iran’s Foreign Ministry Spokesperson Saeed Khatibzadeh says Iran accepts “no artificial deadlines.” He says he hopes the U.S. and Europe don’t believe in these deadlines either and that both sides can reach a “good agreement.”

Khatibzadeh also said the Western sides in Vienna have “retreated from their maximalist demands.” He added that from Iran’s side, the “window for an agreement will not be open forever.”

Diakou Hossein, a Tehran-based analyst, says each side has different calculations regarding the deadline issue. He says that the U.S. and its allies are worried about Iran’s shrinking breakout time, which is the time Iran would require to acquire enough fissile material for a nuclear weapon if it decided to weaponize its nuclear program. However, Iran seeks to portray that it has withstood U.S. sanctions and is not under pressure to rush into a deal.

Meanwhile, officials from South Korea and Saudi Arabia have also travelled to Vienna and held talks with P5+1 diplomats. South Korea’s Deputy Foreign Minister met with Rob Malley, the U.S.’s Iran envoy. According to the South Korean Foreign Ministry, they discussed the issue of Iran’s assets in South Korea that have been frozen by U.S. sanctions. This is estimated to be roughly $7 billion.

Bahram Darayee, the head of Iran’s Food and Drug Organization, has confirmed that imports of additional COVID-19 vaccines will now be prohibited. Darayee said: “At the present, we have no imports of vaccines from foreign countries, and we rely on domestic vaccines which are enough to meet our needs, including for third doses.”

Earlier, Deputy Health Minister Kamal Heydari said Iran has enough domestically-produced COVID vaccines to meet demand. Heydari said because of this and due to current economic conditions, foreign vaccines will no longer be imported.

According to Iran’s Health Ministry 71 percent of Iranians over the age of 12 have received two doses of a COVID-19 vaccine. The most used vaccines in Iran are China’s Sinopharm vaccine, the AstraZeneca vaccine, Iran’s native Barekat vaccine, and the Pasteurcovace vaccine jointly produced with Cuba.

After President Raisi’s inauguration in August, his administration sharply increased imports of COVID vaccines. This was amid a devastating fifth wave of COVID-19 infections in Iran, which was taking roughly 600 lives a day for most of August. During this time Ayatollah Khamenei said Iran must acquire vaccines “in every way possible.”

According to BBC Persian, Iran’s native COVID-19 vaccines have not published the results of their clinical trials. BBC Persian says that one paper has been written about the Barekat vaccine, but this has not been published in any reputable peer-reviewed publication.

Coronavirus infections and deaths in Iran have plummeted amid widespread vaccination and immunity due to previous infections. On January 4th, there were 22 deaths from the virus countrywide, a figure not seen since the early days of the virus two years ago. However, the number of cases of the omicron variant are increasing and was 194 across the country on this same day.

Attacks on U.S. Bases Amid Anniversary of Soleimani Assassination

The U.S.-led military coalition in Iraq has blamed “Iran-supported malign actors” for firing rockets at bases housing troops. The attacks targeted the Ain al-Asad military base, Baghdad’s Green Zone, and a U.S. base in eastern Syria. There have been no casualties from the attacks, and Pentagon officials say the U.S. has retaliated with military strikes.

The attacks come a few days after the second anniversary of the U.S. assassination of Iranian General Qassem Soleimani and Iraqi military commander Abu-Mahdi al-Muhandis. Various militia groups in Iraq have stepped up attacks against U.S. forces since the assassinations.