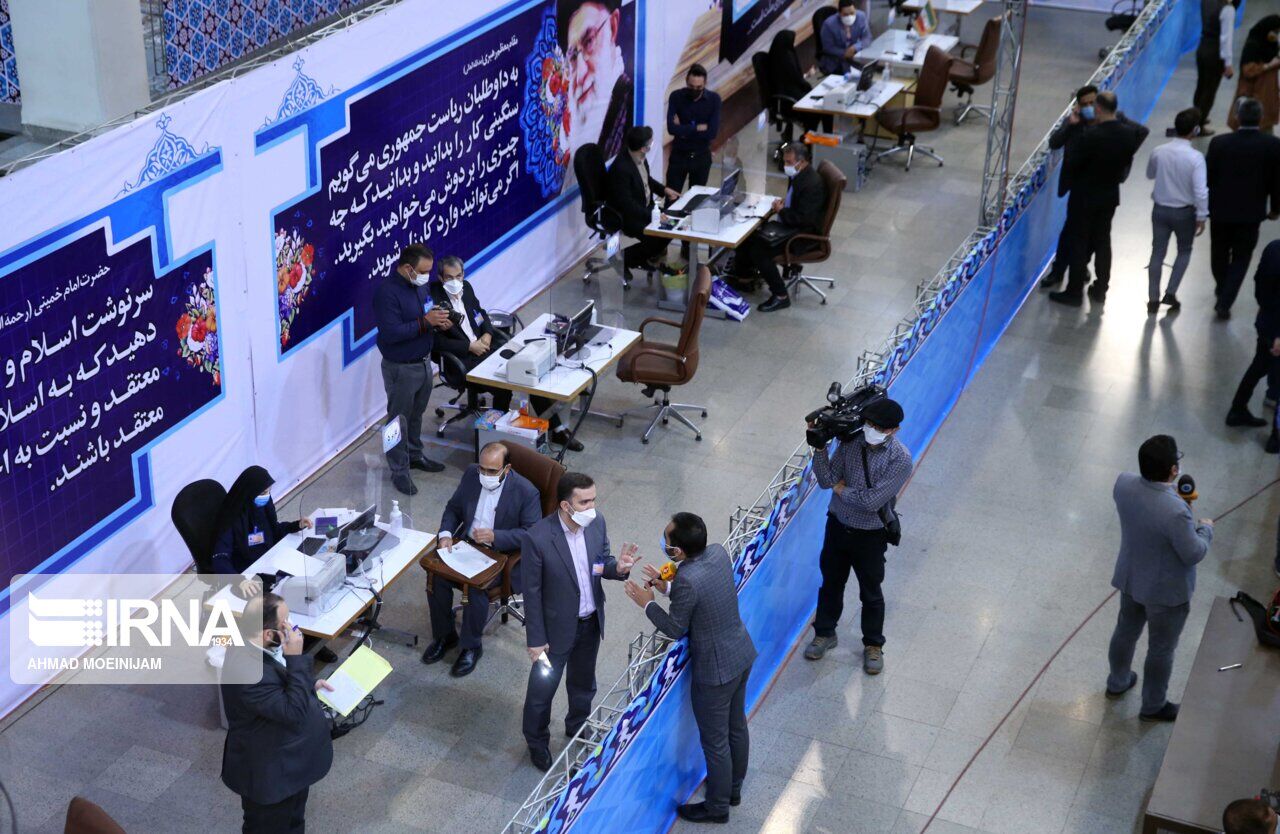 Week of May 10th, 2021 | Iran Unfiltered is a weekly digest tracking Iranian politics & society by the National Iranian American Council

The registration period for individuals seeking to run for president has begun.  Presidential aspirants have five days to register with the Interior Ministry, from May 11 to May 15. Then, the 12-member Guardian Council vets the candidates from May 16-20, which can be extended to May 25. On May 26-27, the Interior Ministry will release the final list of approved candidates. The official campaign season is from May 28-June 16, and the election is on June 18.

The registration period has started amid a controversy over new criteria announced by the Guardian Council on who can run for president. As covered in last week’s issue of Iran Unfiltered, many have said the Guardian Council’s imposition of these rules is unconstitutional, requires parliamentary approval, and rules out the candidacies of several prominent aspirants, including Rouhani’s 38-year-old IT Minister Mohammad Javad Azari Jahromi and potentially IRGC commandeer Saeed Mohammad.

Siamak Rahpeyk, a member of the Guardian Council, says people who do not meet the new criteria could still be approved to run but only for this election cycle. Meanwhile, Mohammad Jafar Montazeri, the attorney general of Iran, said in “his view” the Guardian Council has final say in this matter.

Ahmadinejad registered to run in 2017 as well but was disqualified by the Guardian Council. In recent years, he has fallen out with Ayatollah Khamenei and been strongly critical of the political system. Several of his close allies have also been imprisoned.

After registering, Ahmadinejad said he will not vote in the election if he is disqualified. According to Iranian media, roughly 100 supporters of Ahmadinejad gathered outside the Interior Ministry while he was registering.

Judiciary Chief Ebrahim Raisi is poised to register to run. The spokesperson for the main conservative coalition has said it is a “certainty” that he will register. MP Hossein Naqvi Hosseini says Raisi will likely announce his candidacy on May 13th, on the Muslim holiday of Eid al-Fitr, and register on Friday, May 14th.

Raisi previously ran for president in 2017 and lost to Rouhani. Since then, his political standing has increased. Conservatives have largely united around him for this race, making him the frontrunner.

Foreign Minister Zarf has written a post on Instagram reiterating that he will not run for president. Zarif said it would not be “expedient” for the country for him to run. Earlier in the week, reports emerged that he met with former reformist President Mohammad Khatami and Hassan Khomeini, the grandson of Ayatollah Khomeini. They reportedly urged Zarif to run but he said he would not.

The candidates from the reformist and moderate camps have yet to register. Among those who are widely speculated to register are: Ali Larijani, the former speaker of parliament allied with Rouhani; Eshaq Jahangiri, Rouhani’s first vice president; and Masoud Pezeshkian, a member of parliament and former cabinet minister. Ali Akbar Salehi, the head of the Atomic Energy Organization of Iran, and Mohsen Hashemi, the chair of the Tehran City Council, are also rumoured to be considering registering.

Reformist and conservative analysts are actively discussing what potential candidates from their side would have the best chance of winning the presidency. Many reformists say they do not have a candidate with wide appeal, like Mohammad Khatami in 1997 or Mir Hossein Mousavi in 2009. Conservatives, on the other hand, are uniting around Judiciary Chief Ebrahim Raisi, who has the broadest appeal of the potential conservative candidates.

Sadegh Zibakalam, a reformist activist and professor at Tehran University, gave an interview to the reformist Fararu outlet discussing the reformists’ prospects in the election. Zibakalam said many past supporters of reformists have grown disillusioned from Rouhani “not abiding by his election promises.” Zibakalam stated: “They have no hope in things improving or the situation changing. They ask themselves, why should I participate in the election? Because this action of theirs will not change the situation.”

Zibakalam said reformists are currently divided into two camps. He says one believes in participating in elections at any costs and trying to get their candidates elected, and the other does not.

Zibakalam said both reformist camps are part of the main “Reformist Front” grouping. He says for this reason, it will be difficult for this reformist grouping to create consensus on who to support in the election.

Zibakalam named five figures the reformists are considering for president. These are: Mohsen Hashemi, the chair of the Tehran City Council and son of the late President Hashemi Rafsanjani; Foreign Minister Javad Zarif; Masoud Pezeshkian, a member of parliament and former minister in the cabinet of Mohammad Khatami; Mohammad Reza Aref, a member of parliament who previously headed the reformists’ coalition in parliament; and Eshaq Jahangiri, Rouhani’s first vice president.

Zibakalam ruled out Jahangiri and Aref having much support. He focused on Hashemi, Zarif, and Pezeshkian.

Zibakalam said there was a “very little chance” that Zarif would become the reformists’ candidate. He said Zarif was not as popular as he was when the JCPOA was reached and is under fierce attack by hardliners. He stated: “Hardliners are attacking Zarif using all the platforms they have, including state media.”

Zibakalam was also dismissive of the candidacy of Pezeshkian. He said Pezeshkian will mostly only attract the votes of Azeri-speaking Iranians predominantly in the northwest of the country.

Zibakalam said Mohsen Hashemi would be the best candidate for the reformists. He said he has a good track record as head of Tehran’s City Council and metro system, has not been subject to conservative attacks that have harmed his reputation, and has no history of corruption. Zibakalam said Hashemi would receive more votes than Zarif and Pezeshkian if he ran.

Hossein Naqvi Hosseini, a member of parliament and conservative activist, said conservatives will unite around Raisi as their presidential candidate. He said there will likely be a few other conservative candidates who will run only to support Raisi in televised debates on various fronts, and then will step aside in his favor.

Saeed Khatibzadeh, the foreign ministry’s spokesperson, confirmed that negotiations have been occurring between Iran and Saudi Arabia. He said these negotiations were on bilateral and regional issues.

Khatibzadeh also discussed improving Iran’s relations with the UAE. He talked about Foreign Minister Zarif’s upcoming planned trip to the UAE and stated: “The diplomatic relations between Iran and the Emirates never ended. The Emirates is one of our main economic partners in the region and in the past year there have been various talks between the two countries on different issues. Zarif’s trip to the UAE is along these same lines.”

Khatibzadeh also talked about the Vienna talks and discussed the possibility of renewing an agreement reached with the IAEA in February. This agreement was over the Additional Protocol to Iran’s IAEA safeguards agreement, which allows for heightened surveillance of Iran’s nuclear program. As covered in a previous issue of Iran Unfiltered, Iran suspended voluntary implementation of the additional protocol in February in line with a parliamentary law. However, the February agreement with the IAEA allowed surveillance to continue for three more months, predicated on Iran holding on to the data and only turning it over if sanctions are lifted.

Khatibzadeh said “one option” was for Iran and the IAEA potentially renewing the agreement. He was referencing comments by Iran’s Deputy Foreign Minister Abbas Araghchi, who earlier said the agreement could potentially be renewed. However, Khatibzadeh said this decision would have to be made by relevant authorities in Tehran, not by the nuclear negotiating team.

Khatibzadeh said the Vienna talks have entered the stage of drafting the text of an agreement. He said “America has accepted to do a major part of what it must do in Iran’s view.”

Khatibzadeh added: “Regarding the parts that America still has not accepted, we have said to them [the U.S.] that everything listed by Iran are actions that America took to destroy the JCPOA. In our view these are not outside the JCPOA.”