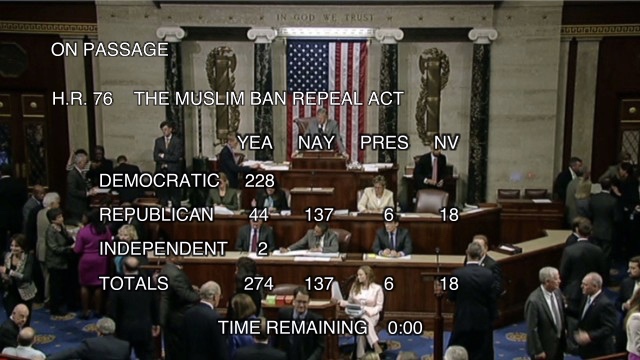 A new Congress has just been sworn in after an electoral landslide and Capitol Hill is a sea of new faces. Today, marking the second anniversary of Trump’s Muslim ban, the new Congress has scheduled a vote on legislation – which had been blocked under previous leadership – to finally repeal the ban.

As the debate begins, Democrats and even some Republican lawmakers deliver impassioned speeches about the stories they have heard from voters impacted by the ban. Spurred by newly galvanized communities like Iranian Americans, who turned out in force at the polls in 2018, even the GOP is pivoting away from Trump’s bigoted policies in time for 2020.

As lawmakers file into the House and Senate chambers to hold final votes, Donald Trump tweets a message accusing Congress of “siding with the terrorists. Sad!” But it’s now a foregone conclusion – the bill will pass and the President, politically defeated and facing an insurrection from within his own party, has little power to stop his ban from finally being terminated once and for all.

This is not political fan-fiction. This is exactly what we will be working to achieve over the next 12 months.

Starting next week, we will begin introducing you to the people running for Congress who can WIN in November with our help. By March, we will have staff on the ground in key districts to register a record number of Iranian Americans to vote. And in the spring and fall we will be organizing the largest Get Out the Vote operation our community has ever seen.

But we need your help to make this plan a reality.

Iranian Americans can elect a new Congress and send a message to Washington: our community has real political power and will no longer be targeted or ignored.

But we need to raise $150,000 by March to begin fully executing our field plan. Will you make a contribution today so that we can hire organizers and have them on the ground in time for our voter outreach campaign?

One year ago today, Donald Trump banned our families from this country. One year from today, with your help, we will end Trump’s ban and hold him accountable.

Thanks for your support,

P.S – If you prefer to make a smaller donation but still make a big impact over the course of this campaign, you can sign up as a monthly donor here for $5…