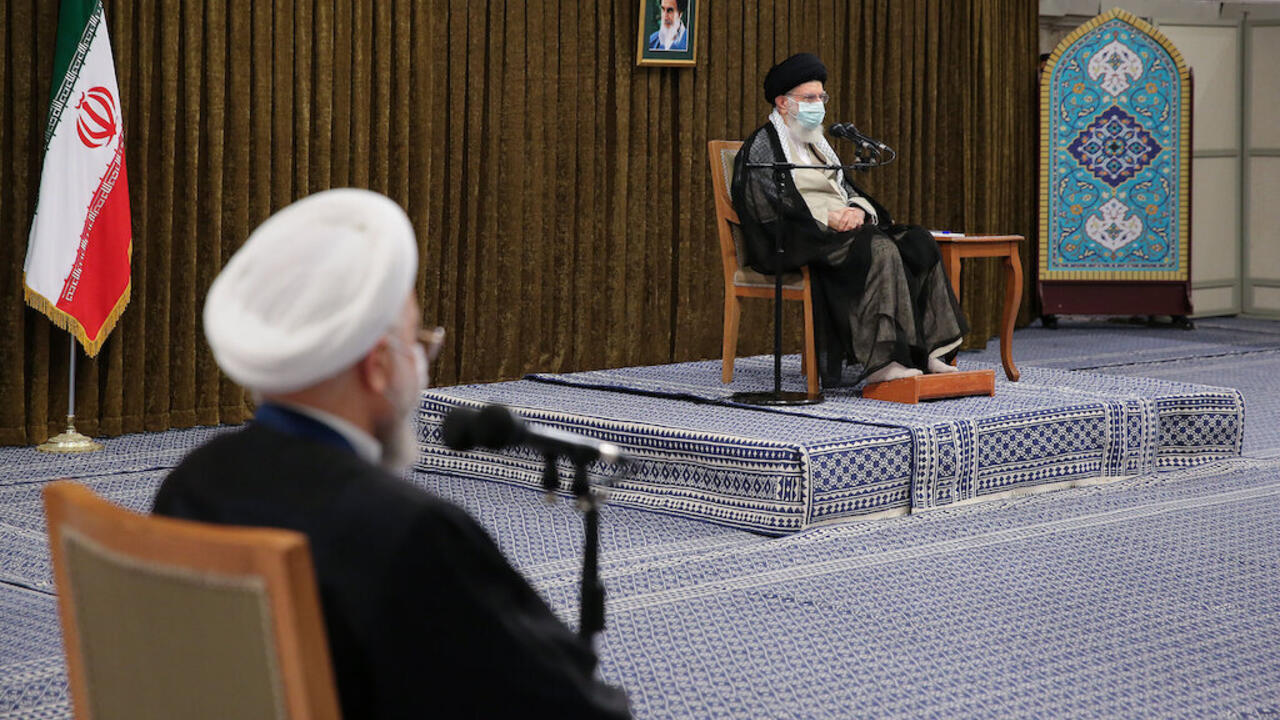 Khamenei Castigates U.S. for Its Positions in Vienna Talks

Ayatollah Khamenei gave a final address to President Rouhani and senior officials from his administration. Khamenei in his remarks said the U.S. has not “moved one step forward” in the Vienna talks and reprimanded Rouhani officials for “trusting” the West.

Khamenei said about the Vienna talks that “on paper the U.S. has not lifted any sanctions and will lift none.” He said the U.S. seeks to include a condition in any Vienna agreement that would require Iran to accept follow-on talks on other issues or else the U.S. will accept no agreement.

Khamenei says the U.S. wants to create an “excuse” on other issues related to the “JCPOA’s principle, regional issues and Iran’s missile program.” He added: “And so if Iran is not willing to talk about these they can say Iran violated the agreement & there is no agreement.”

Khamenei also censured the U.S. for its refusal to give guarantees that it will stick with the agreement. He said: “America does not hesitate to violate its promises and commitments just like it violated the agreement once & it was totally costless for it.”

Khamenei also issued thinly-veiled criticisms of Rouhani officials for “trusting” the West. He said this is an experience Iran must learn from.

Rouhani in recent weeks has blamed a Khamenei-supported parliament bill for preventing an agreement over a JCPOA return. Rouhani said if not for the law, sanctions on Iran could have been lifted as early as March.

Khamenei said that “in this government [Rouhani administration], it became obvious that trusting the West does not work.” He stated: “They won’t help. They will try to hit us everywhere they can and if they don’t hit us in some place, it’s because they can’t.”

Khamenei said to Rouhani officials: “Wherever you made your work dependent on the West and negotiations with it and America, you were unsuccessful.” He added: “And wherever you distrusted them and ended all hope in them, you were successful.”

Protests Continue as Some Detainees are Freed

Protests in sympathy with the Khuzestan water shortage protests took place in different parts of Iran. This included the provinces of Alborz, East Azarbaijan, Ardabil, Tehran, Kermanshah, and Isfahan. Many of those partaking in these protests shouted slogans against Iran’s government as seen in videos posted on social media.

HRANA, the Human Rights News Agency, released a report on the crackdown that began after the Khuzestan protests erupted. HRANA said protests took place in 26 cities in Khuzestan province and that many of these demonstrations were met with a forceful response from security forces.

HRANA says that 171 people have been arrested in relation to the recent protests and 6 people are confirmed to have been killed. According to EuroNews, internet users are also still reporting disruptions in access in Khuzestan.

Meanwhile, the judiciary has freed a number of protestors who were arrested during the November 2019 gas price-hike protests. Those protests saw the government engage in a brutal crackdown and shut down access to the global internet for 10 days. According to Amnesty International, at least 304 were killed across the country.

Prominent former political prisoner Narges Mohammadi says those released include three young protesters who were previously sentenced to execution. These are Amir Hossein Moradi, Saeed Tamjidi and Mohammad Rajabi. The global uproar over their execution sentences in July 2020 was documented in a previous issue of Iran Unfiltered.

The judiciary says around 100 prisoners arrested on “security charges” will be released. It says 15,300 prisoners were granted amnesty last year, which was an 86 percent increase over the previous year.

Kazem Gharibabadi, Iran’s ambassador to international organizations in Vienna, says the U.S. has rejected much of what Iran seeks in the Vienna JCPOA negotiations. Gharibabadi also says the U.S. is attaching conditions to lifting sanctions in line with the JCPOA.

Gharibabadi says the U.S. condition for removing the IRGC’s foreign terrorist organization designation is for Iran to accept future negotiations on “regional issues.” He says this stance is “completely irrelevant and harmful” to the subject of the negotiations in Vienna.

Gharibabadi outlined certain sanctions he says the U.S. is refusing to lift in Vienna. This includes the U.S. refusing to: revoke an executive order to lift a UN arms embargo on Iran (which it is required to do in according to UN Security Council Resolution 2231); lift sanctions on more than 500 individuals who were designated during the Trump presidency for non-nuclear reasons; suspend CAATSA sanctions against Iran; and give a guarantee that it will not leave the JCPOA. Gharibabadi also said the U.S. refuses to discuss providing Iran compensation for sanctions imposed in the Trump era and to allow for a period of time for Iran to verify sanctions removal.

The conservative-controlled parliament is seeking to pass a bill that would further restrict internet access. The bill has garnered widespread backlash, including from the Rouhani administration, Iranian tech companies, some incumbent members of parliament, many civil society groups and activists, and other officials and former officials.

The MPs invoked Article 85 of the Iranian constitution in sidestepping a full parliamentary vote and sending the bill to a commission for passage. As explained in a previous issue of Iran Unfiltered, Article 85 allows for “experimentally” making bills law without the entire parliament voting for them.

Conservatives have tried to make such a bill law for years but faced opposition from the Rouhani administration and others. The current version of the bill is titled, “Supporting users’ rights and basic services in cyberspace. As explained in a previous issue of Iran Unfiltered, the bill will force Iranians onto domestic data infrastructure by further restricting foreign websites and other measures. The bill seeks to replace foreign social media platforms with domestic versions, which the Iranian government can more easily control and surveil.

The bill would also make the sale of VPNs not approved by the Iranian government illegal and punishable by fines or imprisonment. VPNs are required to circumvent the government’s already vast filtering of websites and there is a huge market for buying them inside Iran.

Reza Naqipour, an MP who supports the bill, says foreign apps will not be restricted until alternative Iranian versions are available. Other provisions of the bill require Iranian businesses and web developers to move onto Iranian data infrastructure.

For the bill to become law, it will have to be approved by the parliament’s cultural commission and then the Guardian Council. It will then become law for an “experimental” period. In the past, laws passed in this fashion using Article 85 of the constitution have been “experimentally” implemented for as much as 20 years, despite never being approved by the full parliament.