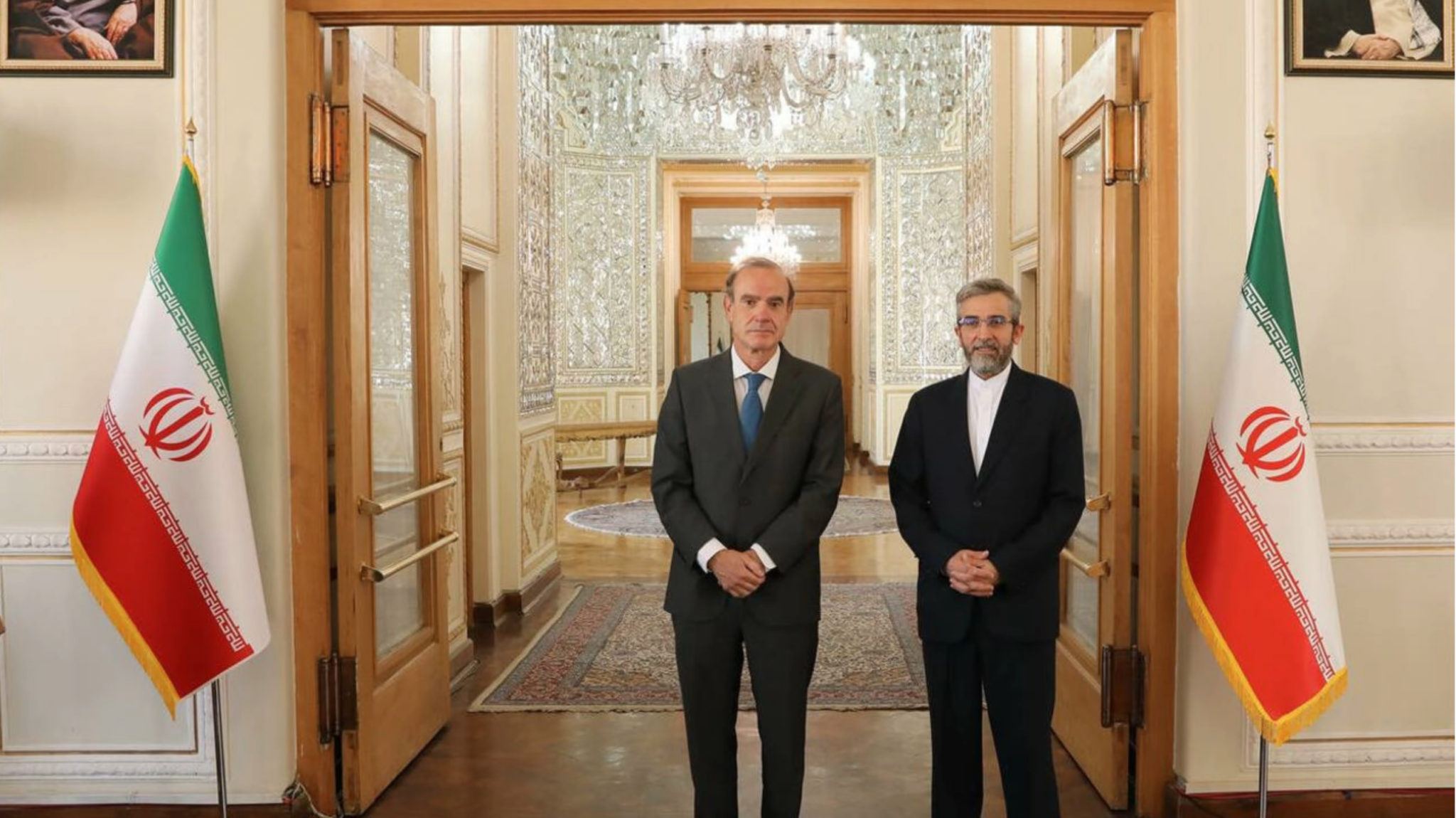 EU High Representative Josep Borrell is in Washington for talks while his deputy, Enrique Mora, has travelled to Tehran. The EU is the coordinator for the P5+1 talks with Iran and has hosted the Vienna talks that began last April aimed at restoring the JCPOA.

Borrell’s spokesperson Peter Stano has said the EU will immediately convene the next round of Vienna talks as soon as Iran, the U.S., and the other JCPOA parties agree on returning.  Stano also said Enrique Mora will discuss with Iranian officials the “urgency” of returning to Vienna.

This is Mora’s second time in Iran in recent months. He attended Raisi’s inauguration in August and met with Hossein Amir Abdollahian, who later became foreign minister.

Mora tweeted about his trip to Tehran this week: “As coordinator of the JCPOA, I will raise the urgency to resume #JCPOA negotiations in Vienna. Crucial to pick up talks from where we left last June to continue diplomatic work.”

During their meeting, Bagheri expressed doubt to Mora that the U.S. is serious about implementing its JCPOA obligations. He also criticized Europe’s “lack of action” on meeting its JCPOA commitments.

Mora and Bagheri also talked about other issues involving the region and Afghanistan.

After Mora’s trip to Iran, an EU official said Iran’s nuclear negotiating team will travel to Brussels in the next two weeks. They will be reviewing the EU’s assessment of the last round of Vienna talks, which took place in June. The official said the aim is to answer questions that Iran’s new negotiating team has.

Iran’s Foreign Ministry said the aim of the Brussels meeting will be to restart the Vienna talks.

Iran’s Foreign Minister Hossein Amir Abdollahian reached an agreement with his Azerbaijani counterpart for the two sides to resolve tensions between them through “dialogue.” As documented in last week’s Iran Unfiltered, tensions between the two countries spiked amid Iranian concerns of Azerbaijan encroaching deeper into Armenian territory.

Abdollahian told his Azerbaijani counterpart that relations between their two countries are “heading towards growth.” Abdollahian said Iran and Azerbaijan shouldn’t allow “enemies” to create differences between them.

Abdollahian travelled to Moscow last week and discussed the Iran-Azerbaijan tensions. He stated in an interview with a Russian outlet: “We believe that new maximalist aims make the situation in the region more complex and the result will be nothing but instability and will not benefit anyone.”

Teachers across Iran staged demonstrations calling for increased wages and changes in their promotion track. This came after a call from teacher’s unions, who have been engaging parliament on a bill to increase teacher’s wages and give them increased benefits.

Demonstrations took place in many cities, including Tehran, Shiraz, Zanjan, Ardabil, among other cities. In Shiraz, the demonstration coincided with President Raisi’s trip to the city. In some cities, slogans were more political and called for the release of imprisoned activists.

A foreign diplomat based in Saudi Arabia has said: “the two sides were on the verge of agreeing …  to ease tensions between them and the (diplomatic) proxy war in the region during the last round of talks.”

This same diplomat says Iran and Saudi Arabia have reached an agreement “in principle” to reopen their embassies and normalize diplomatic relations. The diplomat added: “I think an announcement of normalization of ties may come in the next few weeks.”

Iranian Foreign Minister Hossein Amir Abdollahian has said the negotiations are “on the right track.” He added: “We have achieved results and agreements but still need more dialogue.”

According to AFP, “Saudi media have toned down their rhetoric towards Tehran.” AFP stated: “The state-run Al-Ekhbariya television last week reporting “direct and honest” discussions that would ‘achieve stability in the region.’” This Saudi outlet also repeated a statement by Saudi Crown Prince Mohammad bin Salman saying Riyadh wants “a good and special relationship” with Tehran.

AFP states that Saudi Arabia is interested in ending the war on Yemen and needs to do so to attract more foreign investment.

Separately, Saudi Foreign Minister Faisal bin Farhan said negotiations with Iran were “friendly” to the Financial Times. Bin Farhan is in Washington, DC this week and met with Secretary of State Blinken and U.S. Special Envoy to Iran Rob Malley. They in part discussed the Iran nuclear issue.