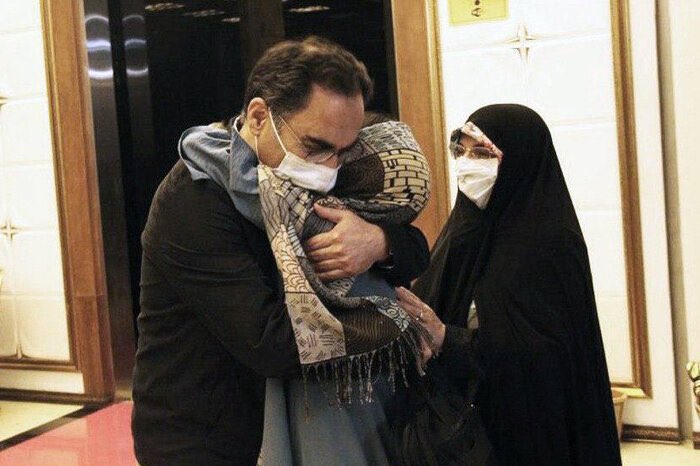 Sirous Asgari, the Iranian scientist detained in the U.S., has returned to Iran. Asgari was acquitted on a sanctions violation charge but was still held in unsanitary conditions by U.S. immigration authorities and contracted Covid-19.

Iran’s Foreign Ministry Spokesperson Abbas Mousavi says Asgari’s return is not the result of a prisoner exchange. He says this is because Asgari was acquitted of the charges against him. Mousavi denied that Asgari is being exchanged for anyone else.

However, after Asgari returned to Iran, detained American Michael White was released from Iran. White is a U.S. Navy veteran who was detained in Iran in July 2018 while visiting his Iranian girlfriend. He was furloughed from prison since the coronavirus outbreak began in Iran.

Iran’s Foreign Minister Zarif said on Twitter: “This can happen for all prisoners. No need for cherry picking. Iranian hostages held in—and on behalf of—the US should come home.”

After news of a potential U.S.-Iran exchange first broke, Iranian officials denied there would be any negotiations. Foreign Minister Zarif said Iran was open to an exchange, but that this could occur without negotiations and through consular officials at Iran’s Interest Section in Washington, DC.

As protests have swept the U.S., National Security Advisor Robert O’Brien blamed countries like Iran and Zimbabwe for stoking unrest. O’Brien claimed Iran has “certainly been active” in trying to foment unrest in the United States.

In response, the Iranian Foreign Ministry denied “any involvement in the internal affairs of America.” Foreign Ministry spokesperson Abbas Mousavi stated: “The events taking place in this country are the result of years of repression and the suffocating of the people’s voices. It’s natural that the American people are fed up and are protesting.”

Mousavi added: “The country that intervenes in the internal affairs of other countries and has no reservations about it is America.”

The protests last November erupted after the government abruptly raised the price of gasoline. As detailed in a previous issue of Iran Unfiltered, the government also shut down the country’s interest for over a week while it repressed the protests.

Rahmani Fazli said that some of the protesters had received “military training” and aimed to start a “civil war” in Iran. He stated: “Months earlier, they began receiving military training and there was an increase in weapons being smuggled across our border. However, we were observing these actions. They used the gas-price increase as an excuse.”

Last November, BBC Persian said of the infrastructure that was destroyed or damaged: 63 banks in Isfahan, 44 banks in Khoramabad, 300 banks in Tehran, 180 gas stations, 32 ambulances, 5 emergency centers, and 150 billion tomans in damages to shops.

On December 4th, President Rouhani said there would be televised confessions of those who participated in the protests in an “organized fashion.” Rouhani said these protestors had been trained for two years for protests to destabilize the country.

He added: “Now that the parliament has started its path, what makes the situation more dangerous is the governing model of the executive branch [the Rouhani administration]. In addition to its shortcomings and confused managing style, and its focus on the outside [world], the [Rouhani] administration does not believe in the principles of jihadi management.”

He went on: “The parliament will use its legislative powers and supervisory capabilities to guide the administration in the right direction.”

After the new parliament was inaugurated, Rouhani said it should not convolute “national issues” with “partisan interests.” The new parliament is dominated by conservatives critical of the Rouhani administration. Of the 279 new MPs elected in November, only 20 were reformists and 37 were independents. The election had the lowest turnout of any Iranian election since the 1979 revolution.

In his speech, Ghalibaf also dismissed the idea of negotiations with the United States. He declared: “Negotiations and compromise with America, the focal point of global arrogance, are useless and harmful. Our strategy toward the terroristic America is to complete our vengeance for the blood of the martyr Soleimani.”

Dissident journalist Ahmad Zeidabadi has written that conservative unity in the new parliament will not last long. In an analysis, Zeidabadi wrote that the different conservative factions that now control parliament no longer have a common reformist rival.

Zeidabadi said that the conservatives will unify against the Rouhani administration for the first year of this parliament. However, he argues this unity will diminish after Rouhani leaves next year.

At that point, Zeidabadi says conservatives will fail to agree on a common platform. He states: “Contrary to their claims, the conservatives have no clear or realistic plan to solve the country’s problems. They have never gone beyond imaginary slogans that are inconsistent with the country’s conditions.”

He ended by saying that the conservative parliament will eventually splinter. He argues the dividing line will be between those who are more pragmatic and have experience in governance and those who do not and are more ideological.

Habibollah Sayyari, a senior commander in the regular army, gave a controversial interview where he indirectly criticized the IRGC. Sayyari is the deputy commander for coordination of Iran’s army. Iran has two military forces, the regular army (or artesh), and the Islamic Revolutionary Guard Corps (IRGC).

Sayyari was speaking to journalists from the official Islamic Republic News Agency (IRNA). A 13-minute clip of the interview was posted online then taken down shortly after it spurred controversy.

In the interview, Sayyari said it was not in the “interest of armed forces to enter the economy.” He said this would distance them from their “main duties.” This was interpreted by many as a rebuke of the IRGC, which is deeply involved in economic matters.

Sayyari also said that getting involved in politics “damages” the military. Many IRGC commanders, as well as some army commanders, regularly comment on political matters in Iran.

Sayyari also complained that the army does not get the same positive coverage in media and films as the IRGC. He said that the army’s role in the Iran-Iraq War has been diminished because the army was not allowed to film and promote its efforts, unlike the IRGC.

He added: “Military forces are not construction firms or companies making refrigerators for their activities to be promoted in the media. But if this is the case, the army should have the same right (to promotion in the media).”

Sayyari further said about the army’s role in the Iran-Iraq War: “The sea was completely the army’s responsibility. The IRGC’s navy force wasn’t created until 1365 (1986-1987) … how can we say the army wasn’t involved?”

However, other army commanders, including the commander-in-chief of Iran’s army Abdolrahim Mousavi, have defended the IRGC’s role in the economy. Mousavi has said in the past: “After the Imposed War [the Iran-Iraq War], the Islamic Revolution was beset by cumulative threats. It is natural that the Islamic Revolution’s Guards to accomplish their duty entered to confront cultural, economic, and societal threats.”

Mousavi added in these previous remarks of his: “Those who ask why the Guards have entered these fields either don’t know or are being negligent. The foundational duty of the Guards is to confront these threats.”

Sayyari was previously the commander of the army’s navy. He was an army commando during the Iran-Iraq War and participated in the operations to take back the city of Khorramshahr in 1982 and break the Iraqi siege of the Iranian city of Abadan.

Days later, both the IRGC and the army issued statements on Sayyari’s remarks. The IRGC statement called for “intelligence and vigilance in the face of insidious attempts by the enemy to create division between the army and IRGC.”

The army statement said: “Unfortunately the jealous and stubborn enemies of the holy system of the Islamic Republic of Iran sought to stoke division and take advantage by reporting on this interview in a deceptive and biased way.”

IRNA, the outlet that posted then removed the interview, also gave an explanation on Twitter. IRNA said that the interview was done in coordination with the army’s public relations office. It added that it took down the 13-minute clip that had been posted after a request from the army’s PR office, but that the entire interview will be posted soon.

IRNA added: “It is possible parts of the short clip that were posted resulted in misunderstanding. With the publication of the full interview, this issue will be able to be analyzed and judged more accurately.”

The statistics released by the Health Ministry on Monday and Tuesday show an increase in the number of COVID-19 infections. On Tuesday, Health Ministry Spokesperson Kianoush Jahanpur said that there were 3,117 new infections across the country. This is the highest daily increase since March.

The Health Ministry said the situation in several provinces was at an “alarming level.” This included the provinces of: West Azerbaijan, Isfahan, Bushehr, Kurdistan, Kermanshah, and Hormozgan. The situation in southwestern Khuzestan province is still at the “red level,” the worst in Iran’s designation system.

Jahanpur stressed that the situation was not back to normal and called on people to abide by all the precautions. He also said that the country has a shortage of specialists who can operate ICU rooms. He further said that the situation could significantly deteriorate this fall, with a second wave of COVID-19 hitting alongside a likely deadly influenza season.