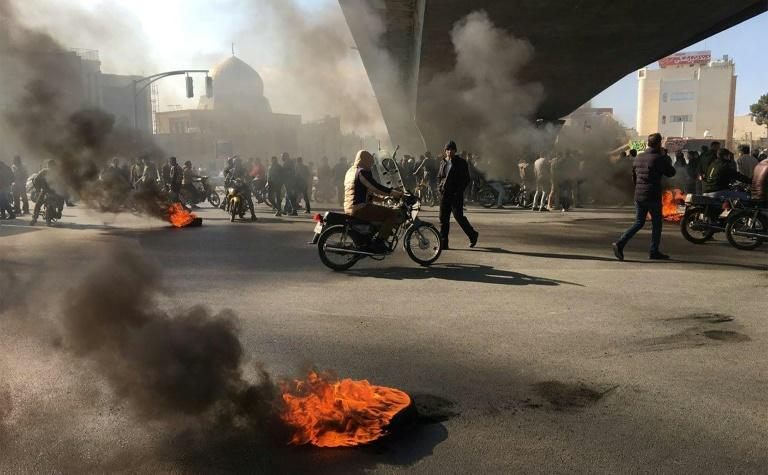 Week of May 18th, 2020 | Iran Unfiltered is a weekly digest tracking Iranian politics & society by the National Iranian American Council

Heshmatollah Falahatpisheh, a member of the parliament’s national security and foreign policy commission, says Iran has spent between “$20-30 billion” in Syria over the past 10 years. Falahatpisheh said that Iran must “get this money” back from Syria. He did not explain how this would be done.

Previously, in January 2018, a senior advisor to Ayatollah Khamenei made similar remarks. Yahya Rahim Safavi, a military aide to Khamenei, said the money Iran spent in Syria must be “returned.” He had added that Syria was ready to repay Iran with “oil, gas, and phosphate mines.”

An Amnesty International report has shed light into the killing of protestors during widespread protests last November. The protests were triggered by an abrupt decision by the government to increase the price of gasoline. They were marked by violent confrontations between security forces and protestors, and an over-weeklong shutdown of the country’s internet.

According to Amnesty, at least 302 people were killed during the protests in 37 cities. Amnesty says the real number is likely much higher.

Amnesty says it has identified the names of 232 of the victims. It says all the deaths except for four were due to gunfire.

Amnesty called on the “UN Human Rights Council to mandate an inquiry into the killings, and identify pathways for truth, justice and reparations.” The Iranian government has yet to release any official statistics into the number of people killed during last November’s protests.

President Rouhani said that Iran is on the “verge of controlling” the coronavirus outbreak. However, he said that the “end of the road” was still distant and that people should not lose their “vigilance.”

Rouhani defended his government for not instituting quarantines of infected areas early in the outbreak. Rouhani stated: “From the beginning we did not choose a path of compulsory quarantines. We chose a path centered on [the public] volunteering and participating. We asked the people to help and the people helped and cooperated well.”

One Iranian sociologist has said this is because of close tribal relations and the high level of poverty in Khuzestan. Despite the official closure of businesses in the province, many have reportedly continued to work and sell goods on the streets.

The judiciary has announced that two people associated with a corruption case involving the currency and automobile market have been sentenced to execution. The accused are Vahid Behzadi and his wife Najva Lashidaei. The sentences can be appealed in Iran’s Supreme Court.

Iran is currently in the midst of an anti-corruption drive spearheaded by Judiciary Chief Ebrahim Raisi. Ayatollah Khamenei had ordered the creation of special anti-corruption courts in 2018.

A Trump administration official said the U.S. was reviewing actions it could take to disrupt this trade. Venezuelan opposition leader Juan Guaido has also strongly criticized the shipment and said it is a warning to “Venezuela and Latin America.”

In response, Iran’s Foreign Ministry has said if any actions are taken against the tankers, Iran will “take reciprocal actions.” Last year, British forces seized an Iranian oil tanker off the coast of Gibraltar. Iran then seized a British tanker in the Persian Gulf, prompting the British to release the Iranian tanker.

Meanwhile, Venezuela’s Defense Minister has said that once the tankers enter Venezuela’s “special economic zone,” they will be escorted by Venezuelan military ships and planes.

Hossein Bastani, an Iran analyst for BBC Persian argues that the powerful Larijani political family is declining in Iranian politics. The Larijani brothers have held senior posts in the Islamic Republic over the years. Ali Larijani has served as speaker of the parliament for the last 12 years, Sadegh Larijani served as judiciary chief, Mohammad Javad Larijani served as head of the Judiciary’s “Human Rights” organization, Baqeur Larijani served as a deputy health minister, and Fazel Larijani served as a president in Iran’s Islamic Azad University system.

Over the past year, the brothers have lost these posts. Ali Larijani did not run for reelection and is leaving the parliament when his term ends on May 27th. Sadegh Larijani also completed his term as judiciary chief and is now head of the Expediency Discernment Council. The other brothers have all also recently left their previous posts.

Bastani says one reason for the weakening of Sadegh Larijani’s influence is a feud he had with current judiciary chief Ebrahim Raisi last year. After Raisi took over the judiciary last year, reports began emerging in Iranian media about corruption involving Sadegh Larijani. This led to a public feud between Larijani and the judiciary.

Bastani says outgoing parliamentary chief Ali Larijani also suffered politically after closely aligning with Rouhani and supporting the JCPOA. Bastani says that The Trump administration’s abrogation of the accord and imposition of new sanctions largely destroyed the political capital of Rouhani and Larijani.

In parallel, Bastani says, the allies of former hardline President Mahmoud Ahmadinejad are rising in Iranian politics. This marks a reversal in the fortunes of these two political currents.

Ahmadinejad had a public spat with the Larijanis during his second term. During one parliamentary session, Ahmadinejad played a video to parliamentarians, including Ali Larijani, allegedly showing Fazel Larijani making a corrupt business deal.

Bastani says that even as Ahmadinejad and his senior aides have been excised from Iranian politics, other Ahmadinejad allies are ascendant.  He explains that many Ahmadinejad-era officials, such as former cabinet ministers and governors, won parliamentary seats in the recent election.