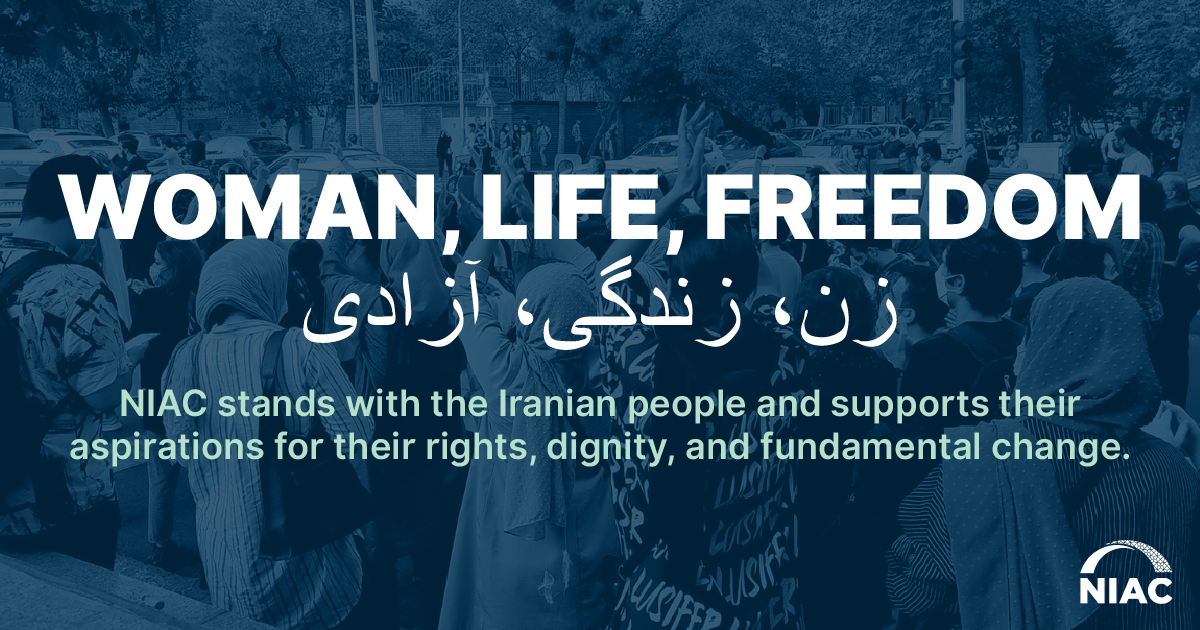 Where NIAC Stands and Has Always Stood

While for NIAC, and the majority of Iranian Americans, our priority right now is focused on the Iranian people and their struggle for freedom, some are using this moment to divert attention from the Iranian people toward settling political scores outside the country. I want to make crystal clear where NIAC stands and has always stood on some key questions:

Historically, regime change has often meant the overthrow of a government by an outside force, like the U.S. invasion of Iraq, which we do not support. Lasting and just change can only be led from within. Successful and sustainable change of governance can only succeed if it is led by, reflects, and achieves the goals of Iranians.

We do not support the U.S. government or any outside influences pushing their own agenda or imposing regime change from the outside. We know what U.S.- led regime change looks like and that is not what the Iranian people are asking for.

Our job is to amplify the voices of Iranians, identify how best we can work in solidarity to support them against brutal repression, and make sure their movement does not get hijacked by outsiders with their own motives.

NIAC has always been a leading advocate for the people of Iran, whether at home or in the diaspora. When Bush threatened war, NIAC was the people’s voice in advocating for peace. When Ahmadinejad stole an election, NIAC elevated the people’s demand for reform and justice. When Trump passed the Muslim ban, NIAC fought for our people’s freedom to travel. And now, when the gasht-e ershad murdered Mahsa and women are leading a movement for change, NIAC shouts with them: woman, life, freedom.

In the period leading up to the JCPOA, Iranians and Iranian Americans overwhelmingly supported engagement and signing an agreement – and NIAC worked diligently with our community to support it and ensure it was grounded as much as possible in the needs of the Iranian people and their diaspora community here in the U.S.

Today, U.S. negotiations on the JCPOA are on pause, and NIAC supports the Biden administration’s view that right now the priority should be on protests in Iran and events that are unfolding on the ground.

Our position on this and all other issues are based on the votes of our members. Any support for engagement is based on ending broad sanctions that hurt ordinary Iranians and undermine human rights and democracy movements; we believe these must be targeted at bad actors, not the whole society. And we do not want Iran, or any country, to have nuclear weapons and we do not want the U.S. or Israel to start a war with Iran over the nuclear issue.

While our views are not ideologically bound and changing events on the ground must always be taken into account, NIAC’s values of peace and policies that do not harm ordinary civilians are not up for debate.

NIAC is a community-led and funded organization that is completely independent of any and all governments. The role of civil society organizations like ours is to hold governments accountable to the communities they represent, not to take marching orders from any government.

We can discuss and hypothesize about the motivations and actors behind the disinformation that has been spread about us. For now, I will say that we believe transparency is crucial, and NIAC goes above and beyond in being fully transparent about our funding, governance, and activities. NIAC holds a Platinum Seal of Transparency from Guidestar, a reputable organization that evaluates non-profits.

We would urge you to demand that anyone spreading outrageous claims or accusations about us offer the same degree of transparency as NIAC such as: how they are funded, who is in charge of their governance, and do they have any affiliations with any governments.

For two decades, NIAC has advocated for and successfully won important measures for human rights in Iran that extend even to the present-day protests.

Since 2009, we have worked to ensure that U.S. sanctions do not unintentionally aid the Iranian government’s repression and prevent the Iranian people from being able to communicate freely online and secure key communications technology, which most recently led directly to the Biden Administration recently lifting restrictions on internet communications tools for Iranians when the women-led protests began in September.

Since 2019, NIAC has produced its Human Rights Tracker, which monitors and spotlights the human rights situation and violations inside Iran.

NIAC does not oppose all sanctions. In fact, we helped draft the law that authorizes targeted human rights sanctions against Iranian government officials. But we do oppose broad sanctions that punish entire populations instead of their ruling governments. We do not need to just look at Iran to understand this – look at Cuba or the situation in Iraq leading up to the U.S. invasion. Broad sanctions entrench and enrich authoritarian governments. They make the rich and corrupt richer and more corrupt, and they impoverish and isolate the people in a way that makes it harder for them to stand up to their government.

Hence, we do not support broad sanctions that have impoverished ordinary Iranians and deprived them of vital life-saving medicine, including during the pandemic. We believe they should be lifted and instead targeted fully against Iran’s government. This reflects the position of many human rights defenders on the ground in Iran who have warned that sanctions further securitize civil society in Iran and work against their demands for freedom and an end to oppression.

From the outset of these protests, we have unequivocally supported the Iranian people and their right to protest, to dignity and freedom, and to determine their own future.

We’ve met with and briefed top officials in the Biden Administration and in Congress and pushed successfully for the Administration to open up the internet in Iran, making it easier for Iranians to freely communicate with the world.

We helped develop legislation that we are advocating for Members of Congress to pass that condemns the killing of Mahsa (Jhina) Amini and urges targeting of sanctions on human rights abusers and take further efforts to support internet freedom.

We continue to brief Congress and the Administration on internet restrictions, actionable next steps, and showing firm solidarity with Iranians fighting for their freedoms.

We have demanded Meta stop censoring videos of protests in Iran. Because of the pressure we and others were able to mount, we met with Meta representatives and discussed the path forward to fixing this growing concern.

We have reported consistently on the countless human rights violations happening right now in Iran.

NIAC does not claim, nor has it ever claimed, to represent the people of Iran. We represent and work on behalf of our own constituency of Iranian Americans at home in the United States. The Iranian-American community is not a monolith, it is a large and diverse group of people spread throughout the U.S. from various ethnic, religious and socioeconomic backgrounds, with varying political views. We work with and on behalf of constituencies who share our values and want to advance the same policies of peace, equitable immigration, civil rights issues that impact our community, and concerns about the policies of our lawmakers, which is the U.S. government.

We have nearly 15,000 donors and over 75,000 supporters. NIAC respects the fact that there are differing views in our community and that no one individual or group can claim to represent all Iranian Americans. At the same time, we recognize the fact that having competing political views is a foundational democratic principle which we must uphold, rather than delegitimize those voices. The freedom to have and express varying opinions is a cornerstone of our democracy.

Please let us know if you have any questions we have not answered at [email protected], our community must unite, not fight one another, at this crucial time.

NIAC Welcomes Biden Administration Commitment for UN Pressure on Iran over Brutal Crackdown
Iran Protests
We must support democracy and freedom for Iranians, not distract from it
Iran Protests

For we Iranian Americans the past few weeks have one hand really inspiring and hopeful — the women from across Iranian society refusing the mandatory hijab and turning that CHOICE into an act of liberation and revolution that strikes fear in the heart of an oppressive regime. On the other hand, its scary — these women […]