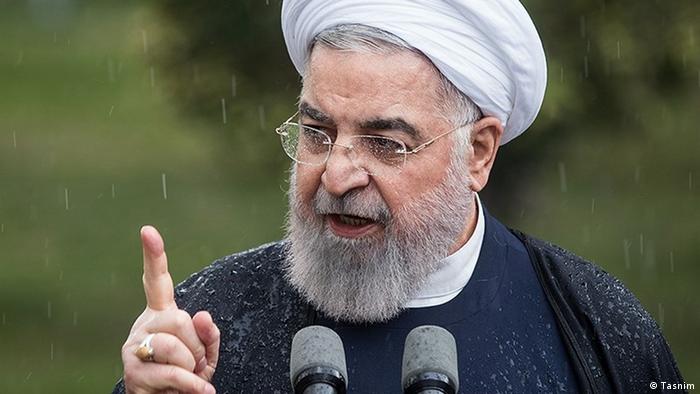 President Rouhani in his weekly cabinet meeting strongly criticized domestic forces in Iran who he says seek to prevent the lifting of U.S. sanctions. Rouhani said the situation is currently conducive to removing sanctions, stating: “Today the situation to defeat sanctions is better than ever before. The Americans have clearly said many times that the path of the previous [American] administration was wrong and that maximum pressure failed.”

Rouhani added: “They [the U.S.] want to return to the path of their commitments and the JCPOA. However, saying this is not enough for us and we are waiting for action [from the U.S.].”

Rouhani said “delaying” the removal of sanctions was “betrayal.” He stated: “Today, delaying the removal of sanctions is betrayal. Any faction, individual, or group which seeks to obstruct sanctions removal for any reason, which today the only reason is the upcoming [presidential] election, this is a great betrayal to history and the Iranian nation and this disgrace will be eternal for that faction and individual.”

Rouhani said he hopes the “minority” in Iran who seek to “obstruct” sanctions removal “repent.” Rouhani said his administration would be able to remove sanctions if allowed to do so, stating: “It is the eve of Eid [the Persian New Year], and the Eid present they [JCPOA obstructionists] can give the people is to stop sabotaging and, if they do, this administration knows and is capable of bringing these sanctions to an end and this is an important point that I emphasize.”

Rouhani did not identify who specifically the forces are in Iran who seek to obstruct a JCPOA return.

Ali Shamkhani, the secretary of the Supreme National Security Council (SNSC), has tacitly criticized President Rouhani’s administration in an interview. It is the latest sign of increased differences between Rouhani and Shamkhani.

Shamkhani said current economic conditions are “not worthy of Iran’s people.” He added that forming a new presidential administration with “fresh breath” will “definitely increase the atmosphere of work and efforts in the country.”

Shamkhani also hinted that he is interested in running for president. He stated: “The main issue of the election isn’t who political groups choose to run in the election to get an appropriate number of votes. Someone must seek the people’s votes who has the ability to improve the country’s developmental indicators.”

Shamkhani also defended having a president from a military background. He himself is a former IRGC commander and has the rank of rear admiral. He stated that “labels like being violent or having militant or authoritarian thinking” are attached to candidates with a military background to “oust them from the election arena.”

The Supreme National Security Council is the main decision-making body on the nuclear issue and other foreign policy and national security matters. Its members come from different Iranian institutions and military bodies as designated by the Iranian constitution. Its edicts are legally binding but require the approval of Supreme Leader Ayatollah Khamenei.

In his interview, Shamkhani also blamed the Rouhani administration for widespread protests after the government abruptly increased the price of gasoline in November 2019. He said the protests were the result of “mismanagement” from the Rouhani administration. At the time, Shamkhani supported the increase in the gas price. Over 300 died in the ensuing protests and unrest, according to Amnesty International.

Rouhani’s chief of staff Mahmoud Vaez has publicly said the secretary of the SNSC must “coordinate with its president [Rouhani].” In turn, Shamkhani said the SNSC is not a part of the presidential administration. He said the SNSC is independent of Iran’s three branches of government as per the constitution.

Shamkhani also had a feud with Rouhani after parliament passed a law mandating nuclear expansion in December. At the time, the Rouhani administration strongly opposed the bill and said the SNSC, not the parliament, is the decision-maker on the nuclear issue. However, Shamkhani then released a statement supporting parliament’s bill.

Akbar Tabari, a former senior judiciary official, has been sentenced to 31 years in prison. He previously appealed his sentence, but it has now been upheld by Iran’s Supreme Court.

Tabari held various senior posts in the judiciary for years. This included being the manager of its finances and its executive deputy. He served in the judiciary during the tenures of judicial chiefs Amoli Larijani and Mahmoud Hashemi Shahroudi.

Tabari’s case was one of the most controversial and high-profile anti-corruption cases in Iran in years. The charges against him included that he set up a “bribery network” and engaged in money laundering. Tabari recently sent a letter to media outlets where he denied the charges and said he was being “sacrificed” and had “sincerely served the judiciary for 20 years.”

Meanwhile, Isa Sharifi, a former deputy of parliamentary speaker Mohammad Bagher Ghalibaf, has been sentenced to 20 years in prison. Sharifi was tried in a military court because he is a member of the IRGC.

Sharifi was Ghalibaf’s top deputy during his 12 years as Tehran’s mayor. Sharifi was sentenced on financial corruption charges in connection to Yas Holding, an economic entity that is part of the IRGC.

Sharifi is the latest IRGC member to be sentenced to prison on corruption charges in recent years. Another prominent case was Hossein Dedayati, an IRGC member turned businessman who was sentenced to 20 years in prison.