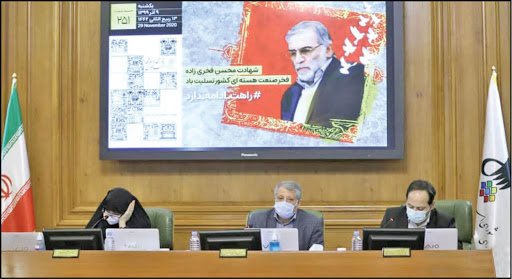 The assassination of Iranian scientist Mohsen Fakhrizadeh brought to the forefront domestic differences on the JCPOA in Iran. While the administration of President Hassan Rouhani has mostly advocated for restraint and keeping the deal alive during the Trump presidency, his conservative opponents have consistently pushed for Iran leaving the JCPOA entirely and retaliating forcefully against actions by the U.S. and its allies against it.

After the assassination conservatives pushed through a parliament bill mandating the expansion of Iran’s nuclear program. As covered in a previous issue of Iran Unfiltered, the bill was in the works for some time. It has now been passed with overwhelming support from the conservative-dominated parliament and approved by the Guardian Council, which vets legislation.

The bill was staunchly opposed by the Rouhani administration. President Rouhani and his senior officials argued the nuclear issue is not in the parliament’s purview but is overseen by the Supreme National Security Council, which is headed by Rouhani.

However, parliamentary speaker Mohammad Bagher Ghalibaf dismissed Rouhani’s protests. The secretariat of the Supreme National Security Council, a position held by retired admiral Ali Shamkhani, also expressed support for the bill and said it was consulted for its passage.

The bill gives a timetable for when it mandates ending these JCPOA restrictions. It requires that the Atomic Energy Organization of Iran (AEOI), take “immediate” steps to produce 20-percent enriched uranium and requires the annual production of 120 kg of uranium enriched to this level. It also requires that Iran cease compliance with the additional protocol to its IAEA safeguards agreement, which allows for far-reaching inspections, two months after the bill becomes law. (See here for a full translation of the bill and its requirements).

The bill is expected to become law towards the end of December. According to Iranian parliament procedures, the president has five days to sign a bill passed by parliament and approved by the Guardian Council. Then the government’s “official newspaper” must publish the bill within 72 hours. After that, the bill becomes law in 15 days.

On December 8th, Ghalibaf said Rouhani had not yet signed the bill and that since the five-day window was over, he was instructing the “official newspaper” to publish it. The bill will thus become law toward the end of December and its key requirements, such as Iran ceasing compliance with the additional protocol, will occur at the end of February.

Falahatpisheh added: “Exiting the JCPOA won’t end the sanctions, but the revival of the JCPOA can.”

An analysis in the reformist Fararu outlet said Iran’s restraint might reach its limits by January 20th. Fararu asked whether Iran could continue to “control” itself in the face of aggressions from Israel and the United States.

Fararu stated: “Any probable increase in tensions between the U.S. and Iran will undoubtedly create a serious challenge for any negotiations and engagement between the two sides in the near future.”

Fararu said for this reason, further provocations against Iran until January 20th should be expected: “It is precisely for this reason that it is likely Mohsen Fakhrizadeh’s assassination will not be the last anti-Iranian action that will occur while Trump is in power from those who oppose Iran.”

Fararu added: “Without a doubt, this issue will result in Iranian restraint reducing and this will lead to new challenges and crises.”

Hosseini said the bill risked empowering those around President-elect Biden who oppose returning swiftly and straightforwardly to the JCPOA. Hosseini stated: “Biden may reach the conclusion that Iran views him as a weak president and seeks to pressure him. So he might from the beginning find it better to take a strong position and show that he is not a weak president who makes decisions in the face of Iranian pressure.”

Hosseini said Biden’s response to the bill will be based on how well he understands the Iranian system. He said if Biden seeks to continue Trump’s sanctions, the “situation will quickly get out of control and things will get worse than now.”

However, Hosseini said Biden may understand that Rouhani is under pressure to take stronger actions. He stated: “An understanding of this situation that has been created in Iran warns the Americans that they do not have many opportunities left to return to the correct path.”

Hosseini added that Biden may also reach the conclusion that Rouhani has no power and is not worth negotiating with. He stated: “What the parliament did and especially the statement by the secretariat of the Supreme National Security Council (supporting the parliament’s bill) might create the perception in the West that Rouhani’s administration, because it is in its final months, does not have the power and authority to meet commitments and perform obligations and that consequently it cannot be negotiated with.”

Human rights activist and lawyer Nasrin Sotoudeh has been awarded the alternative Nobel Prize. The prize was awarded to her by Swedish Foreign Minister Ann Linde. The award is formally known as the “Right Livelihood Award.”

Sotoudeh was recently returned to prison after being temporarily released in November. She went on an over 40-day hunger strike starting in September and caught COVID-19 while in prison.

Sotoudeh accepted the award in an audio recording, where she called for support for all political prisoners held in Iran.

Abdolnaser Hemmati, Iran’s central bank chief, has said U.S. sanctions are preventing Iran from transferring funds for the WHO’s covid-19 vaccine program.  The WHO’s COVAX program “aims to guarantee fair and equitable access” to eventual covid-19 vaccines for every country. Countries that join COVAX can provide funds ahead of time for the vaccine.

Hemmati said Iran has so far been unable to pay into COVAX: “Buying the coronavirus vaccine must happen through the official route of the World Health Organization. Until now, for every way to pay and transfer the necessary funds, we have faced obstacles because of the inhumane sanctions of the American government and the need to obtain an OFAC license.”

Hemmati said that Iran has been unable to use its frozen funds in South Korea nor has it received an IMF loan to combat the coronavirus crisis due to “U.S. pressure and threats.” However, Hemmati added that he was hopeful that “with cooperation and the right actions from the relevant institutions,” Iran will be able to pay for the vaccine.

Other Iranian officials have given more optimistic accounts of Iran’s ability to receive the Covid-19 vaccine. Saeed Khatibzadeh, the foreign ministry’s spokesperson, said this week the Healthy Ministry has “announced that the path for the pre-purchase of the vaccine has been completed.” Khatibzadeh said there had been “good progress” in Iran’s ability to transfer funds for the vaccine.

Iran has also been working on its own indigenously produced covid-19 vaccine. Minoo Mohraz, a prominent physician and a member of Iran’s national committee on the covid-19 crisis, said Iran’s native vaccine recently received approval to begin human trials. She said if it is successful, it can be produced this summer.

Iran has been experiencing a severe “third wave” of coronavirus infections since late September. The number of infections and deaths has been significantly worse than during the first two waves. In late November, the daily death rate was consistently over 450.

The judiciary spokesperson has said the Supreme Court has upheld the death sentence for Ruhollah Zam, an opposition figure who ran a controversial Telegram channel. As detailed in a previous issue of Iran Unfiltered, Zam was lured to Iraq, arrested, and transferred to Iran. He was originally sentenced to death last June. In his trial, Zam rejected most of the charges against him and said he was a “journalist.”

Zam’s Telegram channels spread a mixture of fake and accurate information. It gained prominence after it exposed a government-supported Quran reciter as having sexually abused children, as well as for revealing that former Judiciary Chief Amoli Larijani had many bank accounts.

Many analysts believe Zam’s Telegram channel was at times used by Iran’s different factions to selectively leak information and undermine each other. At its peak, Amad News had 1.5 million subscribers on Telegram.

During the protests in Iran during the winter of 2017/2018, Zam’s Telegram channel tried to organize protests and provided bomb-making instructions. The protests were marked by violence between security forces and demonstrators and infrastructure such as banks and gas stations were damaged. Telegram later banned Zam’s channel, forcing him to start a new one.

Zam’s Telegram channel became a staunch advocate of the Trump administration’s “maximum pressure” policy against Iran. It regularly smeared U.S.-based antiwar activists, including by posting the names of and private photos of activists who protested against the administration’s policies.