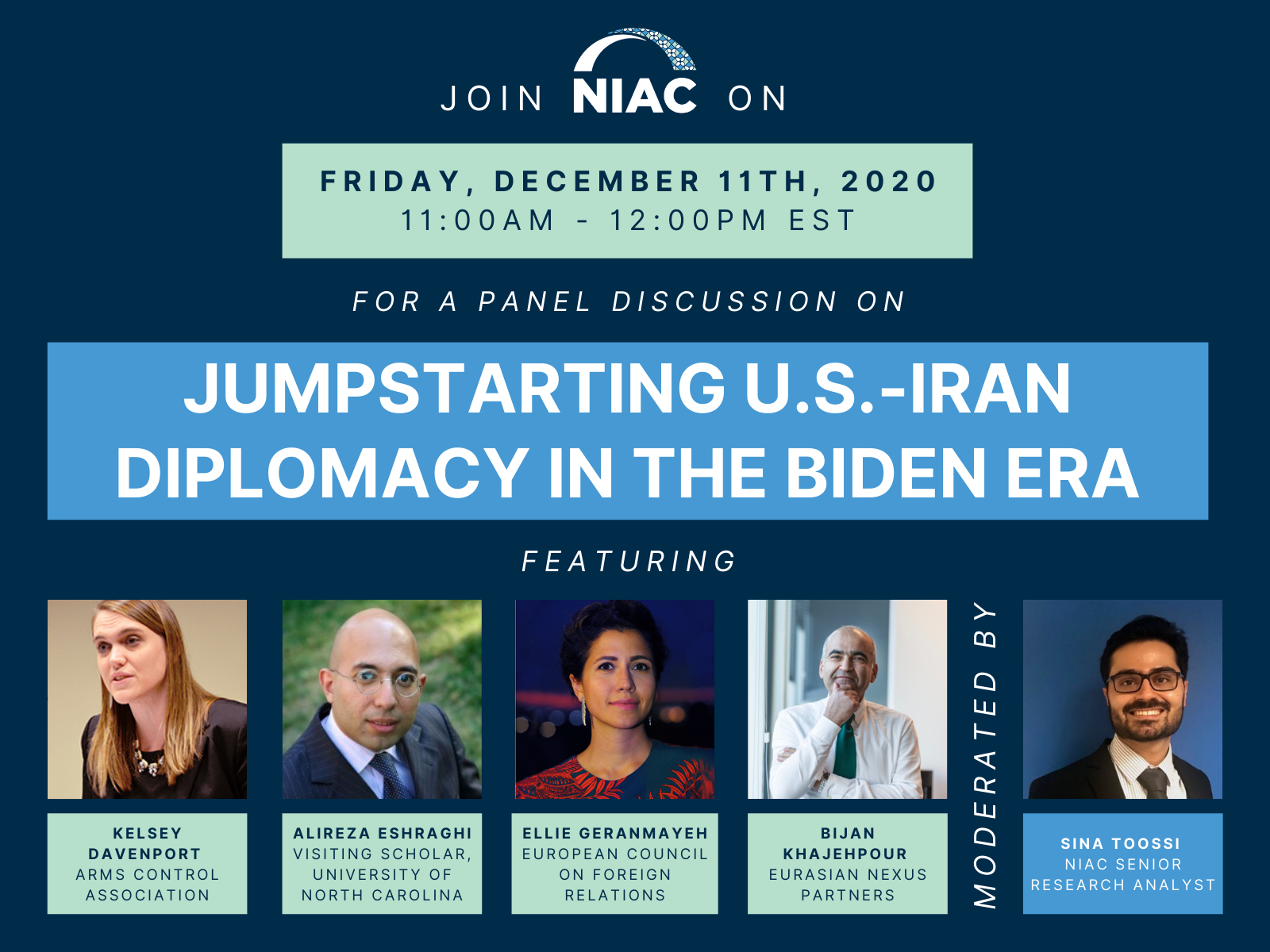 President Biden’s window for negotiations with Iran could close if he fails to return to the Iran nuclear deal and instead seeks to extract new concessions with Trump’s sanctions. The Biden administration only has until next June before the Iranian presidential election potentially changes the diplomatic calculus. This assessment was shared by several experts at the National Iranian American Council’s recent panel, entitled, “Jumpstarting U.S.-Iran Diplomacy in the Biden era.”

The panel discussion focused on the impact of the maximum pressure campaign on Iran’s social and political landscape, as well as the opportunities and pitfalls for future engagement with the country. It featured Ellie Geranmayeh of the European Council on Foreign Relations; Kelsey Davenport, Director for Nonproliferation Policy at the Arms Control Association; Alireza Eshraghi, Visiting Scholar at the Center for Middle East and Islamic Studies at University of North Carolina; and Bijan Khajehpour, Managing Partner at Eurasian Nexus Partners. The conversation was moderated by Sina Toossi, Senior Research Analyst at the National Iranian American Council.

Geranmayeh warned that President-elect Biden is already being labelled in certain quarters in Iran as “the other face of the maximum pressure coin.” She said Iranian conservatives are promoting the idea that Biden’s approach will be “pretending to be pushing for diplomacy but actually doubling down on the sanctions policy.”

Eshraghi said Iran’s politicians and intellectuals believe it is likely that Iran’s conservative Principlists, who swept last year’s parliamentary elections, will replace the Rouhani administration. Eshraghi posited a “novel kind of nationalism” spurring this realignment, characterized by despair over the current political and economic state. Khajehpour elaborated on this dynamic, noting the Trump administration’s withdrawal from the nuclear deal and the consequent economic hardship created despair after a period of hope.

The panel also touched on the feedback loop that sanctions had on corruption within Iran. Eshraghi posited troubling effects such as increased abuses in human rights, shrinking civil society, and empowering the military and security groups that “have the upper hand operating within this shadow, underground economy.” He added that “dozens of scholarly studies” show sanctions have “collateral negative impacts on society as a whole.” Khajehpour noted that long term sanctions “open the doors for corrupt elements,” and exacerbate the already difficult situation in securing international shipping, trade, and financial deals with increased domestic obstacles.

The panelists highlighted the dire COVID-19 situation in Iran and suggested measures to help Iran against the virus and rebuild confidence between the U.S. and Iran. Geranmayeh said there are plenty of “uncontroversial, depoliticized humanitarian measures” that would ensure Iran’s healthcare system has the tools it needs in response to rising cases. She suggested measures such as removing the current U.S. hold on Iran’s IMF loan request, reassuring banks that the Treasury Department will not intervene in pharmaceutical and medical transactions, as well as green lighting transactions through the European financial mechanism known as INSTEX.

Khajehpour also suggested an idea for the Biden administration to encourage the WHO and other international organizations to include Iran in vaccine development. He noted Iran’s underutilized capacity to produce pharmaceutical and vaccines, and argued that involving Iran in such a multilateral process “would show the type of respect which Iran was hoping for through the JCPOA.”

Davenport argued that a U.S. return to the JCPOA is “feasible and desirable,” and that Iran’s nuclear advances can be reversed. She said a return to the deal would help rebuild America’s relations with Europe and build diplomatic momentum for future negotiations. She also said military strikes would not “effectively block Iran’s nuclear program” and that the assassination of Iranian nuclear scientist Mohsen Fakhrizadeh “does not eliminate those capabilities or the knowledge that already exists.”