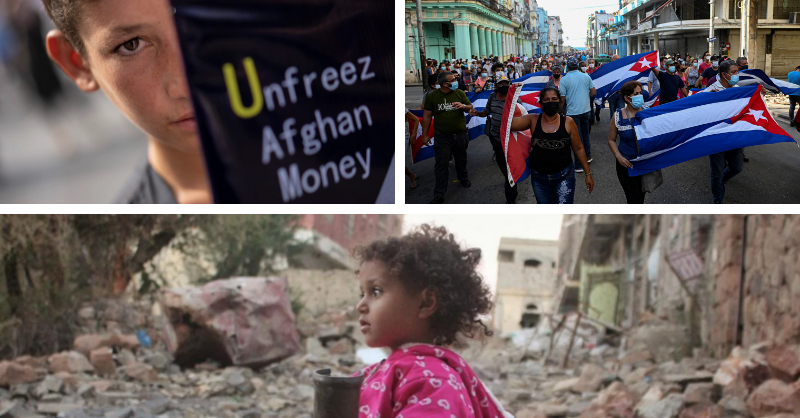 “22 million people {in Afghanistan} are deeply food insecure. Most pockets in the country are either one or two steps away from famine. One million Afghan children are at risk for death,” said Arash Azizzada of Afghans for a Better Tomorrow. Azizzada was underscoring the dire humanitarian impacts of U.S. sanctions during NIAC’s expert panel “Targeting Civilians: The Human Cost of U.S Economic Sanctions.” This unique conversation featured remarks from diaspora organizations focused on policy toward Afghanistan, Cuba, Iran, Venezuela and Yemen. Since the U.S. military withdrawal from Afghanistan, sanctions ostensibly targeting the Taliban are pushing millions of innocent Afghans into famine.

Many of the civilians of sanctioned countries face a dual sword, corruption and human rights abuses from their own government, coupled with the devastating economic fallout of U.S. sanctions. Yet the fact that the plight of civilians in these countries is multicausal shouldn’t confuse the policy debate. According to Dr. Francisco Rodriquez of Oil for Venezuela, “Venezuelans understand things perfectly well, they blame Maduro and they blame sanctions.” According to Dr. Rodriguez, one of the main reasons for the low approval of the opposition – represented by Juan Guaido – is due to its support for U.S. sanctions which are deeply unpopular.

Dr. Aisha Jumaan of Yemen Relief and Reconstruction Foundation noted the dire impact of U.S. sanctions and the Saudi-led blockade of the country. Dr. Jumaan asserted that, “One of the issues with sanctions is they are silent killers. People die in their homes, nobody is counting those deaths.” Sanctions destroyed the economy, pushed millions into poverty and led to mass starvation. She noted that Yemen will have to deal with this damage for many generations to come.

Dr. Assal Rad, Research Director at the National Iranian American Council noted the increasing popularity – across political stripes – of the need to end endless wars. But, Dr. Rad claims, We talk about ending endless war by withdrawing troops from Afghanistan.. But the economic policies that we have implemented potentially can cause more deaths than a 20-year war. Rad also cited the role of sanctions during the Covid-19 pandemic in Iran, one of the early epicenters of the virus. “The reality on the ground was that U.S sanctions were impeding the flow of essential goods.” She emphasized that despite calls from the United Nations, humanitarian organizations and the W.H.O for sanctions relief, to stop the global spread, the U.S instead doubled down on sanctions.

Over the past two years we have come to understand that any new variants can quickly travel from one country to the next. Yet, our response has favored sanctions compliance over the science. Amidst the current outbreak of Covid-19 in North Korea, Daniel Jasper of the  American Friends Services Committee, who moderated the discussion, noted If Covid runs rampant in North Korea, there is plenty of chances for mutations and different variants.” Jasper emphasizes the need to treat these Covid surges as matters of national security.

Despite the grim outlook, the panel looked at opportunities for change. Ricardo Herrero, Executive Director of the Cuba Study Group joined the conversation as a special guest and outlined recent Biden administration changes to Cuba policy. Herrero recounted the impact of President Trump’s tightening of sanctions amidst the Covid-19 pandemic, stating “Sanctions during this time has aggravated the multiple crises plaguing this country – economic crisis, humanitarian crisis, political crisis and have contributed in the most recent months to the mass exodus out of Cuba that most recently led to 35,000 Cubans making it to the U.S.- Mexico border in the month of April alone.” Yet, President Biden has announced a few new policies. According to Herrerro, the latest moves are in line with prior administration announcements to tie sanctions to discrete policy objectives and limit collateral damage. However, he warned that they are reversible because they are Executive Orders, not written into law.

Download a copy of the letter here or see the text below:

We write as organizations and individuals who are deeply concerned by the human cost and impacts of broad-based national sanctions and economic coercion on civilians across the world. While overly-broad U.S. sanctions have long caused undue harm to innocent civilians in targeted countries, contradicting stated policy objectives, this damage has been compounded by the COVID-19 pandemic. We urge you to take swift and immediate action to minimize these harmful impacts on innocent civilians.

Particularly in light of the swift and severe sanctions response that met Russia’s invasion of Ukraine, sanctions have increasingly become a tool of first resort for U.S. foreign policy. As a result, it is important not to lose sight of the considerable human cost and impacts of broad-based national sanctions and economic coercion on civilians across the world. Many of us know firsthand the damage caused by these policies, as we have watched helplessly while our families and loved ones struggle under the weight of economic pressure in our countries of heritage.

In Afghanistan, tens of millions of people face food insecurity due to the U.S. initially withholding billions of dollars of the nation’s central bank reserves and imposing restrictions on World Bank and IMF funds. The decision to block $3.5 billion of Afghanistan’s central bank reserves for potential allocation to 9/11 families will only worsen an already disastrous situation where millions of Afghans face starvation. Central bank reserves are critical to a functioning economy and needed to support urgent relief that can forestall widespread famine across the country. Given the 20-year long U.S. war in Afghanistan and the foreign aid dependency it helped build, the United States has a critical responsibility to address the oncoming humanitarian disaster that has been worsened by U.S. policies.

In Cuba, U.S. sanctions have impoverished the population, leading Cubans to suffer from scarcity of food, essential medicines, and needed medical equipment. These policies continue despite a six-decade long embargo that the international community has urged the U.S. government to lift for almost 30 years.

In Gaza, an Israeli blockade backed by the U.S. government hinders imports of any medical supplies, with key essential drugs and medical disposables at “zero stock” levels. The only COVID-19 testing center in Gaza was badly damaged during bombing in 2021, while medical imaging devices used in the treatment of COVID-19 patients have been blocked from entering Gaza. The blockade exacts a grim toll on the besieged population.

In Iran, U.S. sanctions have devastated the economy and the livelihoods of millions of people, while slowing the response to COVID-19 in one of the world’s early epicenters for the virus. These sanctions have not abated, impoverishing the population and limiting access to goods, resources and medicine that could fight the disease. Moreover, a surge of refugees from Afghanistan has added to the economic and medical pressures facing civilians on the ground.

In Venezuela, oil and financial sanctions initiated by the Trump administration contributed to a 72% collapse in per capita income, heightening food insecurity and worsening the health and economic crisis facing the civilian population. Sanctions against Venezuela have targeted the oil industry, which provided more than 95% of the country’s foreign currency revenue, and impeded the country from accessing international financial markets. U.S. foreign policy decisions have also barred Venezuela from accessing its funds in banks and multilateral financial institutions, obstructing its ability from deploying an effective response to the pandemic and helping fuel the greatest migration exodus in the modern history of the Western Hemisphere. The U.S. is the only country in the world to impose economic, instead of just individual, sanctions on Venezuela.

In Yemen, the U.S. government has continued to support the Saudi-led war, enabling them to impose a devastating blockade that blocks essential goods including fuel and medical supplies from entering the country. This has resulted in the world’s worst ongoing humanitarian crisis, which includes a years-long famine and the largest cholera outbreak anywhere in history. The United States recently agreed to sell missiles to Saudi Arabia which are likely to be used to enforce the blockade, rewarding a government that is starving to death a Yemeni child every 75 seconds.

Whether country-wide sanctions or blockade, U.S. policies have hurt civilian populations in targeted countries in what amounts to unjust collective punishment. Despite the crucial goal of the Biden administration to tackle the COVID-19 pandemic on a global scale, these policies ultimately worsen global public health and put at risk countless millions across the world, depriving them from their right to health, life-saving medical care and equitable access to COVID-19 treatments and vaccines.

We recognize that the Biden administration initiated a comprehensive review of U.S. sanctions policies last year, setting out a general goal of minimizing humanitarian impacts and supporting humanitarian trade to heavily-sanctioned jurisdictions. However, this guidance has not been followed by concrete and comprehensive steps to deliver relief and open up humanitarian trade. As a result, the U.S. government has failed to significantly alter course and continues to enforce policies that fuel humanitarian and public health disasters.

The United States must lead by example, overhaul U.S. sanctions, and ensure that sanctions are targeted, proportional, connected to discrete policy goals and reversible. This would necessarily result in an end to unjust collective punishment of civilian populations around the globe who have little control over governmental decision making. Only by grappling with the full impact of sanctions can the U.S. ensure that sanctions don’t exacerbate the plight of ordinary citizens and serve, rather than undermine, U.S. interests.

Afghans for a Better Tomorrow

Partnership for the Advancement of New Americans

The United Methodist Church — General Board of Church and Society