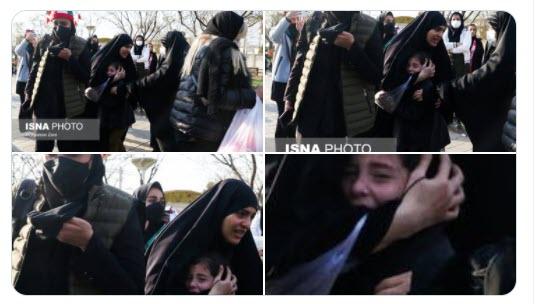 Outrage as Women Barred from Soccer Match in Mashhad

Iranian women were barred from a soccer match between the national teams of Iran and Lebanon in Mashhad. Videos on social media showed women being blocked from entering the stadium by security forces and pepper sprayed.

The forceful prevention of women from attending the match spurred widespread outrage and anger in Iran. Iranian authorities only began allowing women to spectate soccer matches in 2019, albeit in limited fashion. Iran’s soccer federation and sports ministry had notified FIFA that women will be allowed to attend all soccer matches in Iran.

After the incident, Iran’s soccer federation released a statement saying that women “were not invited to watch the match” because it could have caused a “crisis.” The statement further said that nine women had bought tickets and that their money was refunded. It claimed that the other women who showed up for the match bought “fake tickets.”

The statement said the match was originally not supposed to have any spectators because of the pandemic. It said a decision was made three days before the match to permit spectators to attend, but that this was not enough time to prepare the stadium for women spectators.

However, Mehrdad Saraji, a member of the soccer federation’s board, said the sports ministry was at fault for the incident and should be held “accountable.” Saraji also said “we have heard concerning news” from FIFA. In the past, FIFA threatened fines against Iran if it did not allow women to spectate soccer games.

After the Lebanon-Iran match ended, Iranian player Alireza Jahanbakhsh said to Iranian state television cameras that he hoped Iranian women could attend matches. Many Iranian officials and members of parliament also criticized the barring of the women from the stadium.

Fatemeh Rahmani, an MP from Mashhad, blamed the sports ministry for the incident. Tehran MP Mojtaba Tavangar said “girls bought tickets to watch soccer but were given pepper spray!” He added that the incident only created costs for the government “within the country and abroad.”

Iran’s President Ebrahim Raisi and Attorney General Jafar Montazeri have ordered a review of the incident. Montazeri stated, “Officials must use their brains: an apology is not enough, they must return the money [of the women who bought tickets].” However, Montazeri also defended the behavior of security forces in preventing women from entering the stadium.

FIFA has said about the incident that “historic progress has been achieved” in Iran on allowing women to watch soccer matches. But it added that “FIFA expects this to continue, as there can be no turning back.”

U.S. Special Envoy to Iran Rob Malley said on March 27 that he “can’t be confident” that a JCPOA agreement is “imminent.” Similarly, EU Foreign Policy Chief Josep Borrell said on March 28 that “he cannot guarantee that we will reach an agreement.”

Borrell added that Russia was previously “obstructing” a deal over concerns about Iranian oil entering the market and competing with Russian oil exports. Borrell confirmed that Moscow has since dropped its objection but said the U.S. designation of the IRGC as a Foreign Terrorist Organization was currently an obstacle to a deal. Borrell said the designation, which Iran wants lifted, is “not part of the nuclear deal.”

Moscow’s envoy to the Vienna negotiations Mikhail Ulyanov rejected Borrell’s claims about Russia. He wrote in a tweet, “Mr. Borrell spent no single day at the #ViennaTalks on #JCPOA and isn’t obliged to understand the real situation.”

Russia’s Deputy Foreign Minister Sergei Ryabkov said he thinks a JCPOA agreement will take “some days, maybe weeks.” He added that “Russia did its best to ensure the positive outcome of this.”

Former Iranian Foreign Minister Kamal Kharazi, who is currently a foreign policy advisor to Supreme Leader Ayatollah Ali Khamenei, said it is “necessary” that the IRGC’s FTO designation be lifted. Iran’s Foreign Minister Hossein Amir-Abdollahian had earlier said that IRGC commanders told him to do “whatever is necessary for national interests” and that the IRGC “should not become an obstacle.”

However, Abdollahian emphasized Iran will abide by “redlines” regarding the IRGC in seeking a deal on the JCPOA.

Radio Farda has reported that the U.S.’s condition for delisting the IRGC is that Iran abandon retaliation plans for the U.S. assassination of IRGC general Qassem Soleimani. Radio Farda cited a source close to the Vienna negotiations as saying that the U.S. has “precise intelligence” that Iran is planning “actions against officials of the previous U.S. administration.”