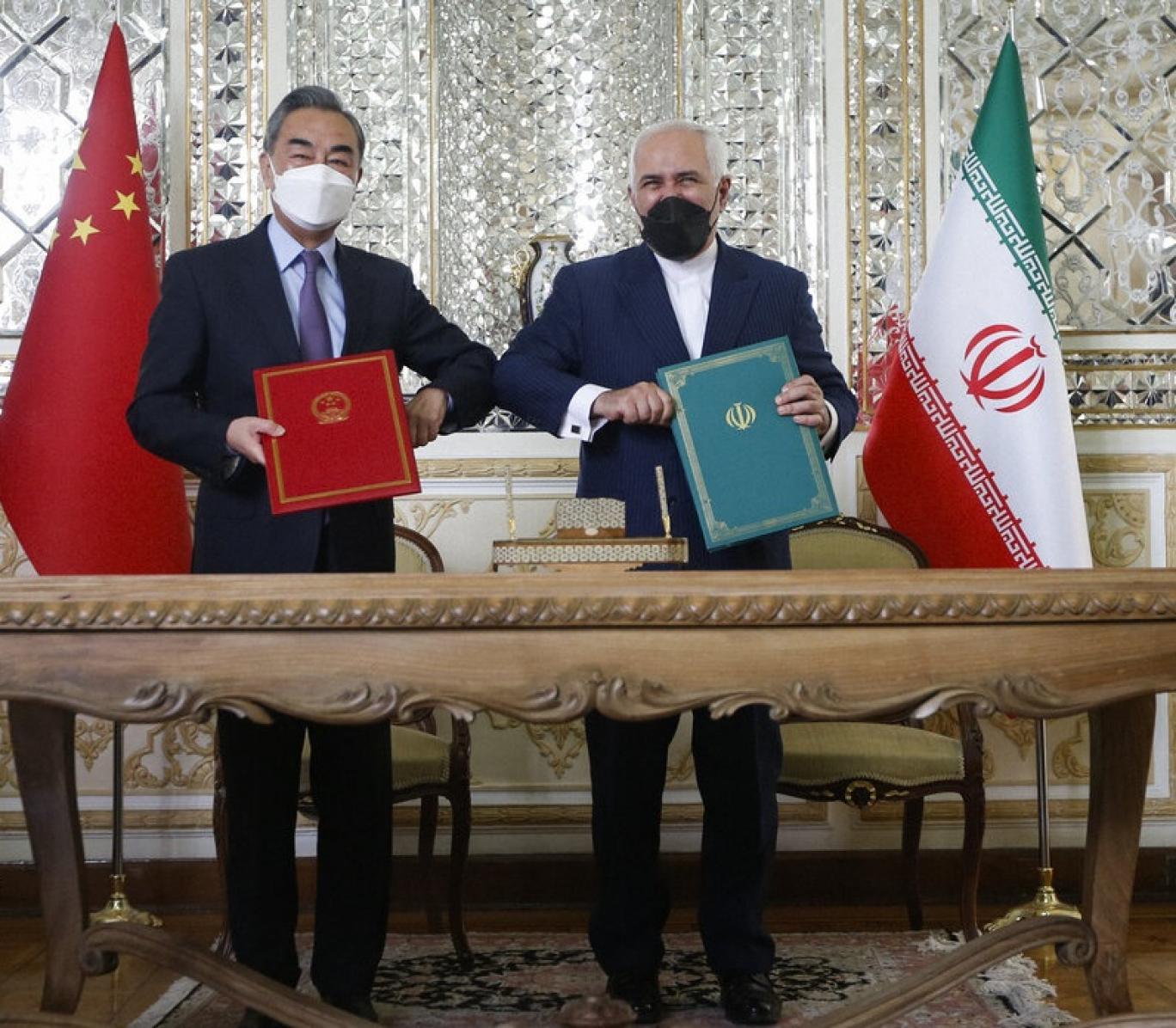 Foreign Minister Zarif and his Chinese counterpart Wang Yi signed a roadmap for “comprehensive cooperation” between Iran and China for the next 25 years. The accord was signed in Tehran and has spurred a wave of criticism and support.

Iranian critics of the accord claim it will turn Iran into a client state of China. They have compared it to the Turkmenchay Treaty, which saw Iran cede territory to Russia in the early 19th century.

Attacks on the roadmap first reached a fever-pitch last summer when negotiations were ongoing. The controversy was covered in an issue of Iran Unfiltered, which detailed the origins of the accord and highlighted reports debunking misinformation about it.

The signing of the accord has now led to protests in some Iranian cities. Many Iranians have also demanded that the full text of the agreement be released.

Iran’s foreign ministry says the agreement is not a “treaty” that would require ratification by the Iranian parliament. Ali Rabiee, the Rouhani administration’s spokesperson, also said Iran is willing to release the agreement’s text in full, but that there are sensitivities on the Chinese side.

Rabiee has said there is a “major psychological operation” against the agreement. He stated: “Some of these individuals, whose records are of giving into foreigners, started this atmosphere and promotion of lies.”

Iran has released “factsheets” about the accord and documents that highlight areas where Iran-China cooperation will be deepened. These highlight cooperation in political-strategic, economic, and cultural areas. This includes cooperation on regional and international issues; cooperation on defense matters and combatting terrorism; cooperation in the sectors of oil, industry, mining, and energy; Iran’s inclusion in China’s One Belt One Road project; and increased banking and financial cooperation.

Iranian analyst Jalal Mirzaei wrote about the Iran-China agreement for the foreign policy-focused IR Diplomacy outlet, which supports the JCPOA and engagement with the West. Mirzaei said opponents of the agreement say it is the beginning of Chinese “colonization” of Iran, while supporters say it is a “great political and diplomatic victory against American hegemony.”

Mirzaei said the reality is that the agreement is neither. He said its opponents have “one-sided views” and do not take into account “China’s undeniable role in global economics and trade.”

Mirzaei said China has already reached similar agreements with many countries, especially Iran’s neighbors in the Arab world. He said this has resulted in deeper cooperation between China and Iran’s Arab neighbors in the energy sector.

Mirzaei stated: “The critics have to be asked, why is there no concern about the long-term and strategic agreements between China and the Arab countries of the Persian Gulf such as Saudi Arabia, the UAE, Kuwait, and Oman, but the signing of a document for strategic cooperation between Iran and China, of which the details have not even been released yet, results in this level of destructive political and media attacks?”

Mirzaei said Iran cannot afford to not benefit from enhanced economic, trade, and security ties with China while its neighbors do.

Mirzaei also criticized supporters of the agreement who frame it as a “blow against American hegemony.” He said the agreement can only be operationalized if U.S.-Iran relations improve and U.S. sanctions are lifted. He said that because of America’s “maximum pressure” campaign, currently $20 billion of Iran’s assets are frozen in Chinese banks and that China will not release them without a greenlight from the United States. He added that China also withdrew from plans to develop Iran’s South Pars gas field because of U.S. sanctions.

Gando, a controversial TV show reportedly funded by a media arm of the IRGC, is currently airing its second season. Gando is a spy thriller and centers on a group of intelligence operatives belonging to the IRGC’s intelligence agency.

The ongoing second season of Gando, which is airing over the Nooruz holiday in Iran, portrays the Rouhani administration as having been infiltrated by foreign spies during the JCPOA negotiations. The show has elicited controversy for portraying Iran’s foreign minister, a character based off Javad Zarif, as naïve and incompetent.

While the show is airing, there has also been a sharp increase in attacks on Zarif and Rouhani from hardline media outlets. The attacks echo the accusation that Rouhani’s administration was infiltrated by American and Israeli spies, and makes baseless accusations connecting Rouhani’s team to organizations such as NIAC and analysts based outside of Iran.

Zarif has criticized the show publicly. He has suggested that he is refraining from going more in-depth in his criticisms against the show for the sake of Iran’s political stability.

The pro-diplomacy IR Diplomacy website says a “destructive current” within Iran is implementing a “planned project” to destroy Zarif’s image. It says the aim is to prevent Zarif from running for president, prevent negotiations with the United States, and discredit the entire moderate political camp led by Rouhani.

IR Diplomacy interviewed Fereydoun Majlesi, a former Iranian diplomat and analyst, to discuss the Gando show and the increased attacks on Zarif and Rouhani. Majlesi said the aim of the attacks is not to “destroy the character of Javad Zarif,” but to “destroy the school of thought of Zarif.”

Majlesi said Zarif had complained to Ayatollah Khamenei about the first season of Gando. The first season centered on a portrayal of Jason Rezaian, a Washington Post journalist who was imprisoned in Iran on unsubstantiated charges of espionage and released in January 2016.

Majlesi highlighted a comment by Ali Jannati, a former culture minister for Rouhani, defending Zarif against the attacks. Jannati had said in a tweet: “I suggest to state television, the third season of Gando should focus on exposing the spy infiltration methods of the Israelis in intelligence, security, and military institutions in the country who blew up an important nuclear center in Natanz, stole thousands of documents, and killed the martyr Mohsen Fakhrizadeh in broad daylight.”

Majlesi says some institutions in Iran seek to prosecute Rouhani and Zarif after they leave office. He said that they “definitely” seek to bring security and espionage charges against them. He added that several months ago, when Zarif received two “yellow cards” from the Iranian parliament, he was nearly accused by some parliamentarians of spying for Israel.

Majlesi said Gando might be aimed at shaping public opinion for Zarif’s prosecution. He said the main aim is to “destroy the school of thought of Zarif from society.”

President Rouhani in his weekly cabinet meeting called for a high turnout in Iran’s upcoming presidential election on June 28th. Rouhani stated: “God forbid we have an election in which there is not maximum participation. We would be inflicting a major blow on the path we chose on the 12th of Farvardin.” Rouhani was referencing a date in the Iranian calendar, in March of 1979, when Iranians after the revolution voted in favor of establishing an Islamic Republic.

Rouhani said the government should not “fear the peoples’ elected choice.” He stated: “If one day people lose their faith in elections, God willing we will never reach this day, this will mean the end of all movements and revolutions in the country.”

The last election in Iran was a parliamentary election in February 2020. The official turnout was at a record low since the Islamic Republic’s formation, at 42.57 percent.

Rouhani also said solving the country’s “complex problems” can only be done through Article 59 of the Islamic Republic’s constitution. This article states that if two-thirds of parliament gives its approval, a referendum can be held on decision-making on “very important economic, political, social, or cultural issues.”

Rouhani has called for a referendum before during his tenure as president. However, he has never been clear on what issues he would like to put up for a public vote.