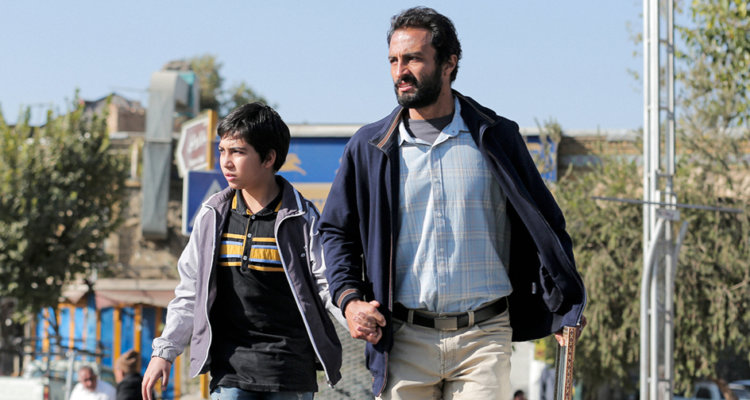 Already a two-time academy-award winner—for A Separation (2011) and The Salesman (2016)—Iranian director Asghar Farhadi has shown once again why he has emerged as one of Iran’s preeminent filmmakers with his newest film, A Hero (Ghahremān). A Hero has already garnered many accolades, including a Golden Globe nomination, the Grand Prix prize at the Cannes Film Festival, as well as other awards for direction, writing, and editing for Hayedeh Safiyari—who has long worked with Farhadi on his major film projects. With her practiced technique, a cast of skilled actors, and Farhadi’s unique gift for storytelling, A Hero delivers a complex story that raises questions about morality, justice, and honor.

The film takes place in Iran’s southwestern city of Shiraz—taking the audience through the city streets, markets, and simple homes of Iran’s working-class families—and centers around Rahim (Amir Jadidi), who gets a brief leave from jail where he is serving time for defaulting on a debt (approximately 5,000.00 USD). Separated from his wife, whom he shares a son with, Rahim hopes to be free to work to pay off his debt and marry his new love interest, Farkhondeh (Sahar Goldust).

The drama unfolds when it is revealed that Farkhondeh has found a purse at the bus stop containing gold coins, which Rahim can use to pay half of his debt in hopes of securing his freedom, if his moneylender, Bahram (Mohsen Tanabandeh), agrees. Feeling the guilt of taking someone else’s belongings, and despite his own difficult situation, Rahim decides to find the owner and return the bag and its contents. When the story of Rahim’s situation becomes known, he is hurled into the spotlight and lauded as a hero.

However, this only frames the beginning of the tale. It is the web of tiny lies, without ill-intent, that start to shape the true narrative of the film. With a set of dynamic characters, such as Rahim’s son who has a stutter and difficulty speaking that pulls at the heartstrings of the audience and the characters in the film, and Bahram, the moneylender with his own story of challenges to tell, this intricate narrative is masterfully weaved together.

Rahim’s kind smile and affable personality carry much of the emotion of the film, as his hopefulness wanes, so too does the optimism of the audience that there will be a happy ending. In fact, this is both the gift and curse of Farhadi’s films, there are no clear heroes or antagonists, and no clean resolutions. Instead, Farhadi gives the audience a raw look at the complexities of life that reflect the unique qualities of Iranian society, as well as the broader nature of human beings. It is his ability to tell a story that transcends borders which makes Farhadi’s film so resonant with larger audiences. A simple reflection by a taxi driver in the film aptly sums up a central theme: “What is fair in this world, for this to be.”

If the reaction of the audience at the Cannes Film Festival is any indication—the film’s cast and crew received a standing ovation that continued for several minutes—then you can be assured this is a movie you won’t want to miss. A moving film with complicated layers of storytelling, A Hero is sure to keep you engaged, make you think, and raise questions of your own.

Find local showtimes to watch A Hero today or stream on Amazon. And also check out The Middle Geeks podcast episode on the film, featuring Vulture columnist Roxana Hadadi and NIAC’s own Organizing Director Donna Farvard.