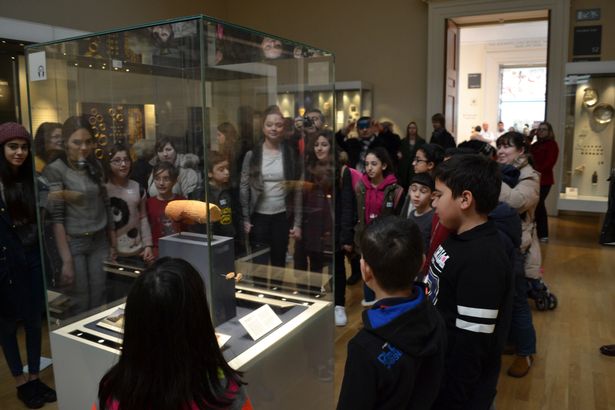 “The Freedom Sculpture a Shared Dream, is a very good example of who [Iranian Americans] are,” said Farhad Mohit, Founding Trustee of the Farhang Foundation. “We are the type of people to give a gift to our city that celebrates our heritage.”

Mohit is referring to the monument that will debut this July 4th, standing “as the ‘Statue of Liberty’ for the West Coast.” Commissioned by the Farhang Foundation, a cultural organization based in Los Angeles, the Freedom Sculpture is a gift from the Iranian community to the United States. Inspired by the Statute of Liberty, the Cyrus Cylinder, and the principles underpinning the United States Constitution; the Freedom Statue is a “pure gesture recognizing [that] the country we live in and the country we came from share ideals.”

The Freedom Statue towers at 16 feet tall and weighs over 20,000 pounds. The silver and gold monument’s debut will be a free public festival symbolizing hope, unity, and will “pull together the tapestry of cultures that make Los Angeles home.”

According to Mohit, the sculpture was “the right idea at the right time.” The intention came to life in 2013 after Iranian Americans came out in droves to support the temporary exhibition of the Cyrus Cylinder at the Getty Villa. The community’s support and financial contributions not only covered the hefty cost of sponsoring the Cyrus Cylinder’s journey from the British Museum to Los Angeles, but also left a surplus in contributions.

Encouraged by the Iranian-American community’s turnout and the untapped potential to “show gratitude to for their new home” as a community, Ali Razi, Chairman of the Farhang Foundation, and his team channeled the community’s lingering enthusiasm and pride in the exhibit’s aftermath. The perfect solution presented itself in building “a monument to [the Cyrus Cylinder’s] ideals.” Given the Cyrus Cylinder’s significance as the first recorded declaration of human rights and its profound role in drafting the U.S. Constitution, it seemed fitting that the monument should celebrate human rights and serve as “a gesture of gratitude and solidarity with the ideals of the country we call home.”

“These rights are [not only] part of our heritage,” Mohit said, “they came from us!”

To bring the monument to life, the Farhang Foundation introduced an open contest to submit designs. To the organization’s surprise, world-renowned designer, artist and writer Cecil Balmond submitted his design and was selected to take on the project, stating his passion for Iran and having worked on structures in Iran previously as the motivation to compete. As for the location of the monument, Santa Monica Boulevard, Mohit described the city’s respect for the Iranian community in LA to have been an influential factor in the city’s permanently turning over “the most prestigious and highly trafficked heart of Los Angeles” for the monument.

While the Freedom Sculpture is the Iranian-American community’s gift to the city of Los Angeles, it stands as a “public monument celebrating individual freedoms, religious diversity and multicultural inclusiveness.” As Los Angeles is home to people of all backgrounds, the placement of the statute in the heart of the city is a tribute to all communities that make Los Angeles the awe inspiring city it is.

“Far too little people fly through Ellis Island anymore,” said Mohit, emphasizing the need for a symbol of diversity on the West Coast. “What better place than Los Angeles, and what better symbol [than the Freedom Sculpture?]” The monument “carries a story that different kinds of people are what make America great.”

Citing Iranians as the most educated and affluent group in America, Mohit added that “we’re responsible for pulling others up … Iranians are great players, but not on a team.” While the election and the Muslim Ban serve as “a great opportunities that allow us to take action,” Mohit was careful to clarify that the Freedom Sculpture was not a reaction to the election or the ban; rather, it was “a proactive gesture of goodwill,” an indication of who we really are as Iranian Americans.