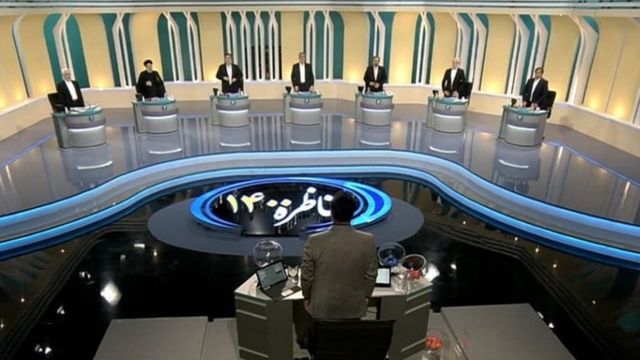 The seven candidates in the presidential race have completed two televised debates. The third and final debate will take place this Saturday. The election will be on June 18th.

During the debates, the candidates discussed the country’s political, economic, and social conditions, criticized the status quo, and offered proposals. The first debate was combative, with the conservative candidates and the two moderate candidates fiercely criticizing one another. At one point, former IRGC commander Mohsen Rezaee threatened that as president he would prosecute President Rouhani and his officials, including fellow presidential candidate Abdolnaser Hemmati.

The second debate was more subdued by comparison. The seven candidates talked for over 3 hours. The format of the debate spurred criticism from many of the candidates. It was mostly the moderator asking each candidate a specific question and giving them several minutes to respond. Conservative candidate Saeed Jalili called for the format to be changed in the middle of the debate, while Hemmati said the format was not conducive to actual debate and resulted in the five conservatives all attacking him nonstop.

The conservative candidates all strongly attacked Hemmati and the Rouhani administration. Jalili blamed Rouhani for focusing entirely on negotiations to lift sanctions and passing legislation to reform Iran’s banking sector in line with global FATF guidelines.

Rezaee said he would increase monthly cash payments to citizens. Conservative Ebrahim Raisi said moderates insult him while complaining about freedom of speech and defended his record in the Iranian judiciary.

Hemmati also complained about conservatives blaming all problems on Rouhani’s administration and not talking about the impact of U.S. sanctions in recent years. He stated: “Some of you should send a letter to Trump and tell him: ‘Mr Trump, be happy, everything you did against the people of Iran, we blamed on Hemmati.”

Reformist Mohsen Mehralizadeh was the only candidate questioned about the Vienna talks to revive the JCPOA.  He voiced support for the deal and said he would return to it. He also called on people to turn out and vote in the election, saying that conservative power centers want a specific “single candidate” to win and want a low turnout to ensure this.

Meanwhile, Ayatollah Khamenei gave a speech earlier in the week criticizing the Guardian Council’s disqualifications of candidates running for president. He said many of the disqualified candidates were “persecuted and oppressed” and must be “compensated.” He said “false information” was used that hurt these candidates and their families. His words were widely believed to be in reference to Ali Larijani, the former parliamentary speaker who was disqualified.

In response, the Guardian Council issued a statement and said that the false information in question was not the reason it disqualified the candidates. None of the disqualifications were reversed because of Khamenei’s comments.

President Rouhani in various speeches this week defended his track record and criticized his conservative opponents. Rouhani talked about Iran’s foreign relations and said domestic elements in Iran did “childish and stupid” things that harmed Iran’s relations with neighboring countries.

Rouhani specifically talked about mob attacks on Saudi diplomatic facilities in 2016 after the execution of a prominent Shia cleric in Saudi Arabia. Rouhani said if this did not occur, Iran would “today be in a better position.”

Rouhani also promised that U.S. sanctions would be lifted before he leaves offices in August. He said Iran was in the “final steps” of “defeating sanctions.” He said most differences in the Vienna talks have been resolved but some remain which he hopes will be resolved soon.

Rouhani also accused the conservatives in Iran’s presidential race of “lying” and “distorting reality.” Most of the candidates in the race blame all of Iran’s problems on Rouhani’s administration.

Rouhani commented on the presidential debates and reprimanded the conservatives for not mentioning the “economic warfare” Iran has faced and “Trump’s sanctions.” Rouhani stated: “It’s as if there was no war and Trump was not there and did nothing wrong. All problems are because of the government [Rouhani’s administration]. America didn’t do anything.”

On June 6th, the conservative Tasnim outlet ran an interview with MP Reza Taqipour, who represents Tehran in the parliament. Taqipour said there is a bill in the Iranian parliament signed by 170 MPs that would introduce new regulations for “foreign social media” software. He said the bill is ready to go to a full vote on the parliamentary floor.

Taqipour said the bill “would limit foreign social media unless they abide by our laws.” The Tasnim article included several provisions from the bill.

The bill requires domestic and foreign social media companies to register with the government and abide by Iranian law. Their operations must be approved by a “supervisory” body. If they fail to do this, their activities will be illegal and the Information and Communications Technology Ministry is required to limit access to the software.

The bill also introduces “prison sentences and fines” for people who provides services (such as VPNs) to circumvent government filters. These will be “6th degree” punishments under Iranian law, which include prison sentences from 6 months to 2 years or fines between 20 million rials to 80 million rials ($475-$1900).

In its new article, Tasnim said “no one in the parliament seeks to limit social media.”

A law that would further limit access to the internet in Iran has been in the works for some time. A similar bill was introduced in the previous reformist-leaning parliament in 2018 but never passed. President Rouhani’s IT minister, Mohammad Javad Azeri Jahromi, opposed it at the time and said the “era of filtering is over.”

The bill has now been reintroduced in the new conservative-dominated parliament and appears on the verge of passing. The MP who talked about the bill with Tasnim, Reza Taqipour, works for the presidential campaign of Ebrahim Raisi. Taqipour is responsible for the Raisi campaign’s social media operations.

In Iran, the most widely used foreign social media service that is not already blocked is Instagram. Social media services such as Twitter, Facebook and many others are filtered. Most government officials are themselves active on all these social media platforms. This new bill, if it becomes law, will almost certainly result in the filtering of Instagram.

The sixth round of negotiations in Vienna over restoring the JCPOA are due to begin on June 12th. Russia’s Deputy Foreign Minister Sergei Ryabkov says “there are only a few issues left that have not been resolved.” He said there are “no insurmountable obstacles left” in the talks.

Meanwhile, Iran’s Deputy Foreign Minister Abbas Araghchi, who has been Iran’s lead negotiator in the talks, briefed parliament on the status of the talks. According to Iranian media, Araghchi said in relation to lifting U.S. sanctions that “important economic parts remain which our negotiating team is insisting on.”

Meanwhile, the IAEA’s Director General Rafael Grossi gave new warnings about Iran’s nuclear program at an IAEA Board of Governors meeting in Vienna.  Grossi said Iran is not cooperating or providing answers to questions the IAEA posed after it found nuclear particles at four undeclared alleged nuclear sites.

Grossi stated: “The lack of progress in clarifying the agency’s questions concerning the correctness and completeness of Iran’s safeguards declarations seriously affects the ability of the IAEA to provide assurance of the peaceful nature of Iran’s nuclear programme.”