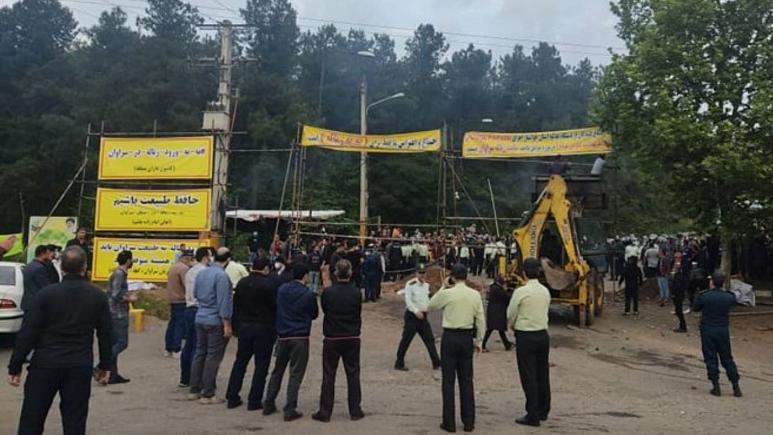 The Saudi-owned Al-Arabiya outlet claimed this week that an agreement has been reached to restore the JCPOA. It added that the foreign ministers of the negotiating parties would soon travel to Vienna to announce the deal.

In contrast, Israeli outlets reported this week that U.S. officials are “closer than ever” to announcing the “defeat” of the negotiations. Axios also reported on April 24 that the Biden administration “has recently started discussing a scenario” in which the JCPOA would not be revived.

However, these Saudi and Israeli-sourced claims were denied by U.S. officials and Iranian sources. State Department spokesman Ned Price said on April 27 in response to a question about the Israeli reports: “It sounds like you are citing a press report that’s citing anonymous Israelis, so oftentimes that is a recipe for information that may not be entirely accurate.”

Iran’s IRGC-affiliated Tasnim outlet cited an “informed source close to the [Iranian] negotiating team” denying the Al-Arabiya report. The source said the foreign ministers will travel to Vienna only if there is a deal and Washington accepts Tehran’s “redlines.”

Against this backdrop, Iranian Foreign Ministry spokesman Saeed Khatibzadeh said this week that the formal negotiating process would resume soon. Of note, the negotiations in Vienna have been suspended since mid-March. Khatibzadeh did not say where the next in-person meeting would be held but said the pause “does not benefit the talks.”

Senior U.S. officials such as Secretary of State Antony Blinken and White House Press Secretary Jen Psaki also warned Iran’s “breakout” time has decreased this week. This refers to the amount of time Iran would require to amass enough fissile material (weapons-grade uranium or plutonium) to develop one nuclear weapon, if it makes the decision to weaponize its nuclear program.

Psaki said Iran’s breakout is currently down to “just a few weeks or less.” She blamed the Trump administration for this development and stated, “If we go back, under the Iran nuclear deal, Iran’s nuclear program was tightly constrained.”

Blinken told the Senate Foreign Relations Committee on April 26 that the JCPOA was still the best option for the United States. He stated: “We continue to believe that getting back into compliance with the agreement would be the best way to address the nuclear challenge posed by Iran and to make sure that an Iran that is already acting with incredible aggression doesn’t have a nuclear weapon.”

Blinken also discussed what appears to be the main remaining point of contention in the talks, the U.S. designation of the IRGC as a terrorist organization. He said about delisting the IRGC: “The only way I can see it being lifted is if Iran takes steps necessary to justify the lifting of that designation. It knows what it would have to do in order to see that happen.”

Blinken appeared to be referring to an alleged U.S. demand that Iran drop plans to avenge the 2020 U.S. assassination of the IRGC commander Qassem Soleimani. Iranian officials have in recent weeks rejected this purported demand.

Arrests at Protest over Accumulated Garbage

Iran’s official IRNA outlet reported that 22 people were arrested in the village of Saravan in northern Gilan province at a protest over accumulated trash. The inhabitants of Saravan have for years complained about a nearby landfill polluting their environment.

The protestors from Saravan have for the past 20 days staged a demonstration in front of the landfill. On April 28th, police confronted them after they blocked a garbage site from entering the site. Videos on social media showed security forces using tear gas.

The people from Saravan previously protested the landfill from 2016-2018. During that period, the government promised that it would address their concerns.

Iranian outlets are now reporting that the Interior Ministry has issued an order to renovate the landfill in Saravan.

Verdict Nears in Trial of Hamid Nouri over 1980s Executions

A verdict is expected in the coming weeks in the ongoing trial in Sweden of Hamid Nouri, a former official in Iran’s judiciary implicated in mass executions in the late 1980s. Nouri was arrested after getting off his flight in Stockholm in November 2019 and faces charges of “crimes against humanity.”

Nouri is the first Iranian official to be arrested abroad and charged with playing a role in the executions of the summer of 1988. The executions were ordered by the Ayatollah Ruhollah Khomeini, the founder of the Islamic Republic, and took place at the end of the Iran-Iraq War. Most of those executed were members of the Mujahedin-e-Khalq opposition group, which allied with Baghdad during the war, and leftist political prisoners.

At the time, Khomeini’s designated successor Ayatollah Hossein-Ali Montazeri opposed the executions—which ultimately led to him losing his position in the Islamic Republic. According to Montazeri, upwards of 4,000 were executed that summer. Amnesty International has estimated 4,500 were put to death.

Nouri is mentioned in the memoirs of several political prisoners who were held in Tehran’s Gohardasht prison at the time. He was reportedly a former IRGC member and an assistant to a “death commission” set up at the time to hand out execution sentences.

According to the memoirs of Iraq Mesdaghi, who was held in Gohardasht prison at the time, Nouri would ridicule prisoners. He also randomly picked people to be sent before the death commission.