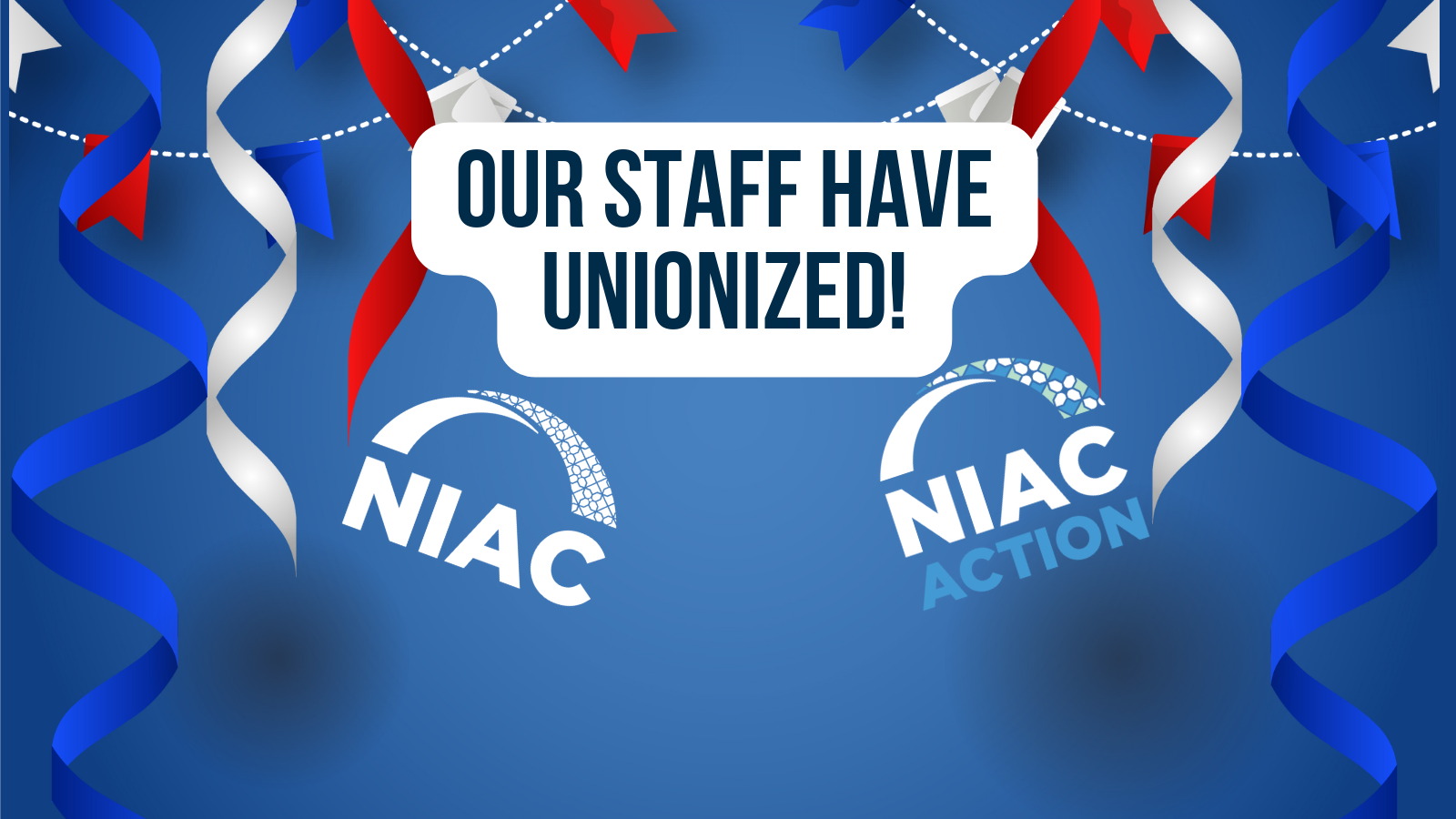 This Labor Day, we are not just recognizing the contributions of working people or expressing our solidarity with labor – we are putting our words into action. We are excited to announce that NIAC management has voluntarily recognized the NIAC Workers Union!

NIAC Management congratulates staff on exercising their right to organize & voting to join IBEW Local 1900. We look forward to working with the union & staff in service of our mission as we celebrate our 20th anniversary.

We are proud to be joining the ranks of other nonprofits with staff unions – such as J-Street, Center for American Progress, and Human Rights Campaign – as well as to become the first unionized Iranian-American organization.

NIAC is built on the idea that everyday people can build power by organizing together to bring real change on the issues that affect our lives. In the past, we have worked alongside labor to advocate on issues like preventing war and protecting human rights. And we have long admired the vital work of labor unions inside Iran.

Now, we are gratified to work with our staff to take the next step in putting our values into action – and we join them in standing in solidarity with workers, unionized and non-unionized, across all industries and sectors.

A union is an organization formed by workers (either full-time or part-time workers) who join together and use their strength to have a voice in their workplace. Through their union, workers have the ability to negotiate from a position of strength with employers over wages, benefits, workplace health and safety, job training, and other work-related issues. Unions also serve an important role in making sure that management acts fairly and treats its workers with respect.

Unions are democratic organizations and their leaders are elected by the membership, namely workers who belong to the bargaining unit.

What are the benefits of having a union?

There are many benefits of having a union. First, unions attract better and more competent workers. Union workers tend to be better workers than non-union workers. Which job in the community is going to attract a higher caliber performer—the one with the good wages, better worker protections, benefits, and working conditions, or the job with low pay and lack of worker protection? Not only will better workers apply to a union facility, but management will have a significantly greater number to choose from, allowing them to hire the very best. It also prevents a high (and costly) staff turnover rate and hiring of workers that fit best with the close-knit workplace culture. It can be used as a tool to recruit younger employees: “Our employees are treated fairly and  have a powerful voice in the workplace.” Happy employees produce more and work harder, which in turn is good for the organization.

Second, unions ensure problem-solving mechanisms at work. We help ensure that job expectations are clear and reasonable. When everyone knows the rules, and you have an expert representative in your corner, employees can be shielded from bad bosses. And when the boss doesn’t follow the rules, a grievance process gives you the mechanism you need to fix the problem without having to hire a lawyer. More minor problems can be resolved before they become larger and more problematic.

What is collective bargaining and how does it work?

Collective bargaining is the process of negotiation between employees and their employer over wages, working conditions, benefits, and other aspects of workers’ compensation and rights.

A committee of our co-workers sits down and hammers out an agreement known as a “union contract” on every issue of concern to our bargaining unit. The committee sits at the bargaining table as equals with management. The union bargaining committee represents the united strength of all union members. The majority of members must approve the agreement before it can become accepted as a contract.

ON UNIONS IN THE U.S.

Montgomery, David. The Fall of the House of Labor: The Workplace, the State, and American Labor Activism, 1865-1925. Cambridge University Press, 1987.

Kraus, Henry. The Many and the Few: A Chronicle of the Dynamic Auto Workers. University of Illinois Press, 1947.

Goldfield, Michael, and Amy Bromsen. “The changing landscape of US unions in historical and theoretical perspective.” Annual Review of Political Science 16 (2013): 231-257.

ON UNIONS IN IRAN

Jaffe, Sarah. Work Won’t Love You Back: How Devotion to our Jobs Keeps us Exploited, Exhausted, and Alone. Bold Type Books, 2022.