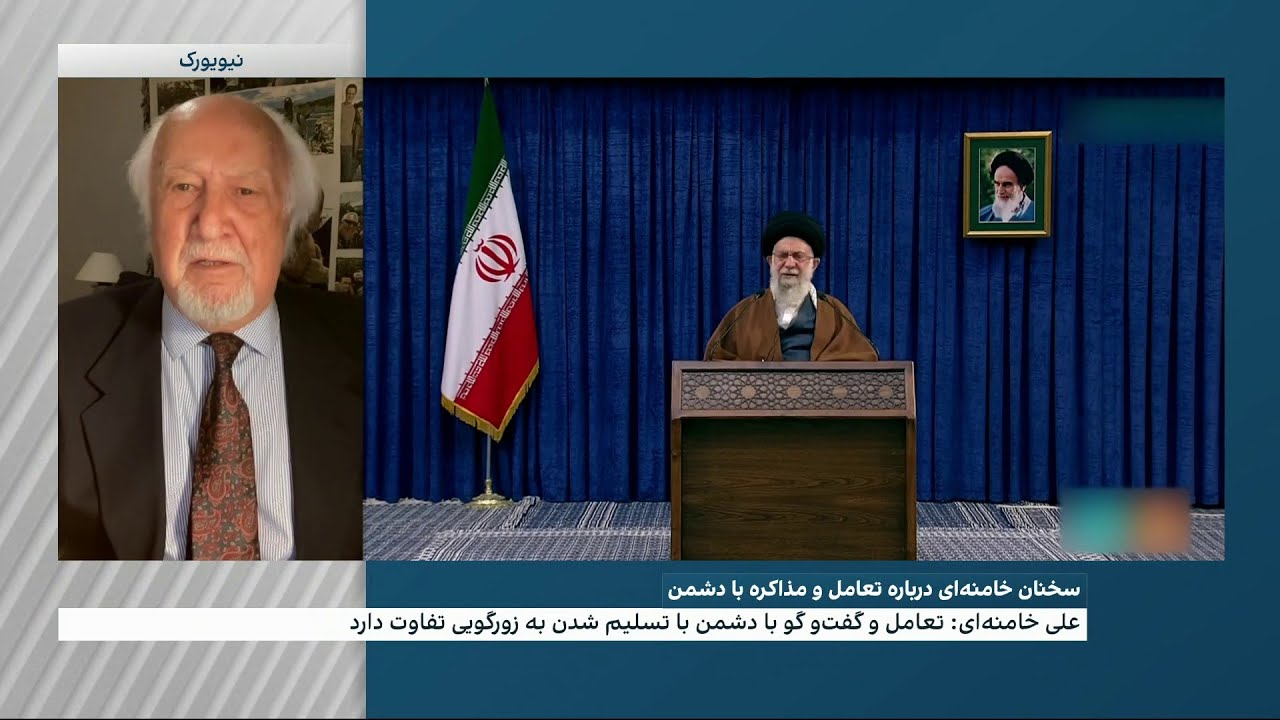 Khamenei Voices Support for Negotiations Amid Tepid Progress in Vienna

Ayatollah Khamenei has expressed support for “negotiations with the enemy” (i.e., the United States) for the first time in years. During the Trump presidency, the official position of Khamenei (and the Islamic Republic by extension) was that there would be “no negotiations and no war” with the United States.

Khamenei said in a televised address to clerics in Qom, a spiritual center for Shia Muslims: “Negotiating, talking, and engaging the enemy at some points does not mean surrendering to them. We have never surrendered and will never do so.”

Nour News, an outlet affiliated with Iran’s Supreme National Security Council, also expressed support for negotiations. It stated: “Negotiations to secure national interests have never been taboo and do not mean surrender.”

Nour News added: “Iran’s approach to the negotiations is based on the principles of securing national interests, preserving honor, defending the lost rights of the nation, and reaching a good agreement.”

Meanwhile, Iran’s top negotiator in Vienna Ali Bagheri said there is “progress” and the talks are “forward facing.” He added that the open parentheses (brackets) in the draft agreement are decreasing (i.e., the sides are bridging differences).

Iran’s Foreign Minister Abdollahian described the negotiations as on the “right track” this week. In an interview with Al Jazeera, he said the Western sides in Vienna were “procrastinating,” but said the U.S. has “adapted to the realities” of the situation by dropping some maximalist demands.

Abdollahian said on the sanctions Iran expects lifted: “Lifting sanctions means lifting all forms of sanctions stipulated in the nuclear agreement and the sanctions the Trump administration reimposed that contradict the terms of the agreement.”

Abdollahian added on what Iran seeks regarding guarantees that the U.S. will stick to the deal: “We demand guarantees that include not imposing any new sanctions and not reimposing sanctions after lifting them under any pretext.”

Meanwhile, State Department Spokesperson Ned Price reiterated this week that there has been “modest progress” this week. But he added “that progress needs to be more than modest if we are going to be in a position to salvage the JCPOA and to ensure that the nonproliferation benefits that the JCPOA conveys aren’t diminished, watered down, eliminated by the advancements that Iran has made in its nuclear program.”

China’s top diplomat in Vienna said China supports Iran’s positions on its nuclear program. But he said this is only if Iran’s nuclear program does not risk nuclear weapons proliferation.

French Foreign Minister Le Drian said the negotiations are moving “slow, too slow.” He said at the current pace they are unlikely to lead to any agreement “within a realistic timeframe.”

Axios reported that the Biden administration has set the end of January or early February as the deadline to decide on the JCPOA. Iran’s ISNA outlet cited a source close to Iran’s negotiators as saying talk of a deadline is unhelpful and aimed at pressuring Iran. ISNA’s source says a deal can be reached in “shortest amount of time” if all sides are serious and focus on bridging differences.”

Iranian analyst Hassan Beheshtipour said the sides have reached agreement for the first step of a JCPOA return. He said this would involve the U.S. greenlighting the release of frozen Iranian assets in South Korea and Iraq and Iran suspending 60 percent enrichment.

Vahid Jalalzadeh, the head of the Iranian parliament’s national security and foreign policy commission, expressed openness to an “interim deal” being reached in Vienna. He said the U.S. has offered proposals for an interim deal and Iran has not rejected them. But he added that Iran’s preference is for “permanent and maximum deal” that meets the country’s interests.

However, Foreign Ministry Spokesperson Saeed Khatibzadeh later said that Iran does not seek an interim deal and wants a full JCPOA return. He stated: “We all have to be certain that America’s return [to the original deal] is verified and guaranteed and the cycle of sanctions have to be removed—none of these can happen with an interim agreement.”

Jalazadeh repeated that Iran’s position is that the U.S. must lift sanctions, Iran must verify this, and then Iran will return to JCPOA compliance. He said the U.S. is willing to lift “many sanctions” but not all and raised the issue of Trump’s redundant sanctions on Iranian institutions.

On verifying sanctions lifting, Jalalzadeh said Iran must be able to sell its oil and get the revenues for doing so. He said the U.S. can lift sanctions on paper then reimpose them instantly, while this is not the case for Iran’s JCPOA commitments, and thus Iran must verify sanctions lifting.

On January 12th, a third working group commenced in Vienna focused on “implementation arrangements and sequencing” of a return to JCPOA compliance. This working group reportedly began its work “in a positive and constructive atmosphere. The other two working groups have focused on Iran’s nuclear commitments and the U.S.’s sanctions lifting obligations.

Baktash Abtin, an Iranian poet and filmmaker, has died of COVID-19 while serving a six-year prison sentence. The Iran Writers’ Association, of which he was a member, issued a statement announcing his passing and condemning Iranian authorities.

Abtin was imprisoned last year after being charged with “propaganda against the system” and taking “actions against national security.” Several years ago, he participated in a demonstration commemorating the victims of the “chain-murders” in the 1990s which saw many members of Iran Writers’ Association killed, allegedly by rogue intelligence agents.

Abtin passed away after being in the hospital for nearly one month with COVID. This was his second COVID infection. He was hospitalized last summer with COVID and a picture of him handcuffed to a hospital bed spurred widespread outrage on Iranian social media.

The Iran Writers’ Association said in its statement: “The anti-freedom government has taken away a host of our freedom-loving heroes from us.” Before he passed, the Association said it would hold the “Islamic Republic government, the Intelligence Ministry, and the Judiciary” responsible for anything that happens to Abtin.

Reporters without Borders also posted a tweet blaming the “high regime’s authorities for his death.”

January 8th marked the second-year anniversary of Iran mistakenly shooting down Ukrainian civilian airliner 752. All 176 people on board were killed after the plane was hit by two surface-to-air missiles.

The plane was shot down amid peak U.S.-Iran tensions following the U.S. assassination of Iranian general Qassem Soleimani and 9 others days earlier in Baghdad. Iran’s military shot down the aircraft around the same time as a ballistic missile attack was launched against U.S. military positions in Iraq.

Citizens of Iran, Ukraine, Sweden, the UK, and Canada were among those killed. Canadian Prime Minister Justin Trudeau at the time partly blamed the escalation of tensions triggered by the U.S. for the downing of the aircraft, stating: “I think if there were no tensions, if there was no escalation recently in the region, those Canadians would be right now home with their families.” Trudeau added that the international community had been clear about “managing the tensions in the region that are brought about by US actions as well.”

The trial in Iran over the downing of the aircraft is ongoing. The details of what led to Iran’s military shooting down the aircraft are still unclear.

10 people have been charged in connection with the aircraft’s downing. This includes the commander of the missile defense system that shot the plane down and two of its operators. Their charges include manslaughter and negligence.

Iran’s government has paid $150,000 to some of the families of the victims. A government insurance organization says $150 million will be paid in total to the victims’ families.

Hamed Esmailiyoon, the spokesman for an association that represents some of the victim’s families, says they hold senior Iranian officials responsible. They say Iran’s Supreme Leader Ali Khamenei, commander of the IRGC Hossein Salami, and members of the Supreme National Security Council are primarily responsible for the plane’s downing.

Iranian officials have not explained why they refused to acknowledge that Iran’s military shot the plane down for several days after it occurred. According to a leaked tape of private remarks made by Iran’s former foreign minister Javad Zarif, Iranian military officials knew Iran accidentally shot down the aircraft by “Wednesday afternoon” (later in the same day it was shot down), yet during a meeting Zarif had with them the following Friday (January 10) they denied Iran had shot down the plane.

The family of one of the victims has implied that Hossein Salami, the commander of the IRGC, told them the plane was intentionally shot down. According to Mohsen Asadi-lari and Zahra Majd, the parents of two victims, Salami met with them and said: “If the plane didn’t crash, war with America would have started and tens of millions would have died.”

The IRGC’s spokesperson Ramezan Sharif denied Salami made these remarks. He said Salami and other IRGC officials met with the Asadi-lari family on February 6, 2020 at their request. He said their claim about what Salami told them was “incomplete, biased, and distorted.” He added that what they said was “untrue and far from fair.”

The conservative-controlled parliament has passed a bill to investigate the performance of former moderate President Hassan Rouhani. The bill passed with 138 votes in favor, 28 opposed, and 10 abstentions.

According to the bill, there will be an investigation into the role of Rouhani’s chief of staff and his economic team into “wastefully distributing billions of dollars’ worth of currency and gold.” The role of Rouhani’s brother Hossein Fereydoon in the nuclear negotiations will also be investigated.

Fereydoon is currently imprisoned in Tehran’s Evin prison on corruption charges. During Rouhani’s first term, he participated in the nuclear negotiations and met with then-U.S. Secretary of State John Kerry.

Mohammad Hassan Asfari, a member of parliament representing Arak, said the bill will investigate “who created the grounds for infiltration of spies in the former president’s office?”