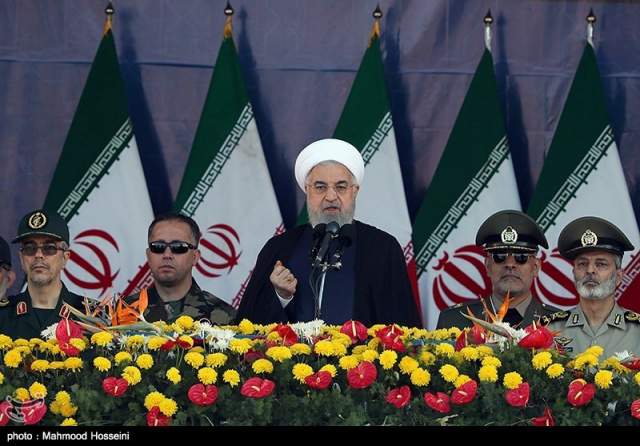 The ingredients for a war with Iran are falling into place. The Trump administration’s termination of oil waivers for importers of Iranian oil and designation of the Islamic Revolutionary Guard Corps (IRGC), a branch of Iran’s state-run military, as a foreign terrorist organization (FTO) are dangerous acts of escalation. Surprisingly, the Iranian reaction to the IRGC designation has been restrained as Tehran’s top decisionmakers remain committed to waiting out the Trump administration and not being baited into conflict. However, their approach is under immense domestic challenge—and could soon become unsustainable.

Iranian president Hassan Rouhani and his reformist and moderate allies continue to prefer to minimize foreign tensions through diplomatic engagement. Despite President Donald Trump’s abrogation of the Joint Comprehensive Plan of Action (JCPOA) nuclear deal and the reimposition of hard-hitting unilateral sanctions, Rouhani has won elite consensus on refraining from retaliatory actions that could spur a multilateral front against Iran or risk conflict.

Rouhani has pushed for a policy that is best described as strategic patience. It has been marked by continuing to adhere to the JCPOA, reticence to escalate regional tensions, and preserving ties with Europe in the face of the Trump administration’s “maximum pressure” campaign. While Rouhani and other senior officials have ruled out talks with the Trump administration, they have left the door open to engaging a future White House that renters the JCPOA.

“[The U.S.] has burned the bridge,” Rouhani declared last August, “Now, the U.S. is standing on the other side … If it is honest, it should fix that bridge again.” In February, Rouhani reiterated that Iran would be willing to engage the United States “if America reverses its course.”

However, the Trump administration’s blunt economic pressure, regime-change rhetoric, and actions, such as the IRGC designation and termination of oil waivers, are closing the window for internal moderation and removing brick-by-brick the bridge that Iranian pragmatists are standing on. Instead, Iranian hardliners, who seek permanent U.S.-Iran estrangement not unlike their U.S. counterparts, are consolidating power.