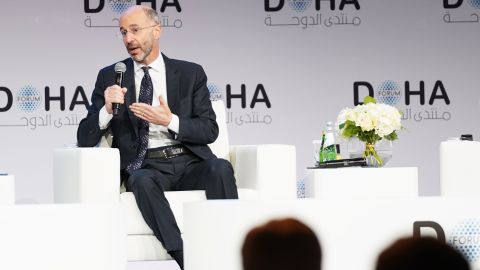 Reports indicate that most major issues in the Iran nuclear negotiations, aimed at restoring the Joint Comprehensive Plan of Action (JCPOA), are near the finish line. But one major hurdle appears to remain: the Trump administration’s unprecedented designation of the Islamic Revolutionary Guard Corps (IRGC) – a major branch of the armed forces in Iran – as a foreign terrorist organization (FTO). Iran is adamant that the unprecedented designation be removed, while the Biden administration appears to be pushing for concessions outside of the nuclear file in return.

Numerous international mediators are seeking to resolve the impasse, including the European Union, Qatar and Iraq. Even though the designation is largely symbolic given the host of broader sanctions targeting the IRGC, the Revolutionary Guard and the FTO designation trigger political sensitivities in both the U.S. and Iran. While America undoubtedly has significant valid security concerns regarding the IRGC, including its regional activities and the hostage-taking perpetrated by the IRGC’s Intelligence branch, the political debate in Washington has largely centered on the optics of such a move rather than real-world implications. Similarly, among Iran’s political elite, the IRGC is perceived as a vital defender of the Iranian state, making it exceedingly difficult politically for Iran’s negotiators to drop the issue of the FTO designation.

Why Did Trump Designate the IRGC?

Iran had continued to comply with the JCPOA even after the Trump administration announced the U.S. would exit the accord and snapped back sanctions beginning in May 2018. By the spring of 2019, Democratic contenders for the Presidential nomination were pledging to restore the JCPOA, which was countered by calls from Iran hawks to amplify pressure on Iran to block a restoration. Writing on April 2, 2019, key “maximum-pressure sanctions” advocate, Mark Dubowitz of the Foundation for Defense of Democracies, urged the Trump administration to counter Democratic pledges to restore the deal by enacting a “wall of additional sanctions that a [Democratic] successor could not easily dismantle.” Arguing that the political cost of removing these sanctions could be made to be unbearable for a future administration, Dubowitz continued, “These sanctions would be directed not against the nuclear program but the regime’s role as the leading state sponsor of terrorism.” Among the many suggestions was a call to designate the IRGC as an FTO, suggesting that “international companies would stay out of Iran” as long as it is in place.

Despite resistance from the Pentagon and CIA, who had opposed an FTO designation of the IRGC for decades and warned about regional escalations and endangering U.S. servicemembers, the Trump administration designated the IRGC as an FTO days later on April 8, acknowledging it as “the first time that the United States has ever named a part of another government as a FTO” (the other 72 organizations designated as an FTO are all non-state groups). Then Secretary of State Mike Pompeo claimed the designation “brings unprecedented pressure on figures who lead the regime’s terror campaign, individuals like Qasem Soleimani.” In follow-up interviews, Pompeo declared that Soleimani will be treated like a terrorist, in a foreshadowing of the January 2020 assassination that nearly brought the U.S. and Iran into a full-blown war.

What Impact Did the Designation Have?

The designation of the IRGC as an FTO helped to push Iran out of compliance with the JCPOA and trigger a dramatic deterioration in regional security, as many observers foresaw at the time.

It also triggered unity across Iran’s political spectrum for the IRGC, with even reformist members of parliament and critics of the IRGC donning their uniforms to stand in solidarity with the Guards. The parliament subsequently passed a resolution declaring all U.S. military forces in West Asia to be treated as terrorists.

On May 8th, 2019, Iran announced that it would halt its voluntary compliance with aspects of the JCPOA in a bid to secure its rights from other parties to the agreement, stopping short of a full withdrawal. Over time, Iran increasingly walked away from the limits set under the JCPOA while holding out the prospect of restoring full compliance if sanctions relief was delivered. Now, Iran’s breakout timeline – the time it would take to secure enough fissile material for a nuclear weapon, if it chose to do so – is only a few weeks.

The nuclear deterioration was matched – if not exceeded by – a dramatic reduction in regional security that nearly led to a wider war. Incidents include:

What Sanctions Target the IRGC?

The IRGC has been one of the world’s most sanctioned entities, which has not changed regardless of the status of the JCPOA. Even if the FTO designation is removed in the weeks ahead, the IRGC would remain perhaps the most sanctioned entity on planet Earth due to multiple overlapping sanctions, and will remain radioactive to outside business.

Sanctions targeting the IRGC include:

Hundreds of IRGC-linked persons and entities will remain sanctioned under the above authorities regardless of the status of the JCPOA and FTO designation. It is so heavily sanctioned that the Treasury Department even maintains its own label “[IRGC]” for identifying designated individuals linked to the Guards.

What are the practical benefits of the FTO designation?

While the FTO designation has imposed significant costs on U.S. interests, it is almost completely duplicative of existing U.S. sanctions authorities against the IRGC. There are two areas where the FTO designation provides a modicum of additional authorities. The first is an expansion of criminal liabilities to extraterritorial cases of support for the IRGC, beyond those already provided by the International Emergency Economic Powers Act (IEEPA). However, these additional authorities have not been utilized since the 2019 FTO designation. Second, the FTO designation removes discretion by U.S. officials on whether to admit individuals into the U.S. who have had any link to the IRGC. The U.S. already has plenty of authorities to deny any suspect foreign nationals, including those with potential ties to the IRGC. However, the FTO designation significantly limits the ability for the U.S. to make exceptions, which has led to a blanket ban against millions of ordinary Iranians who were conscripted into the IRGC as part of their compulsory military service but are otherwise unaffiliated with the group, as described in the next section.

While the FTO designation is largely symbolic, it has had a significant impact on the visa and vetting process for many Iranian nationals. Under Section 212(a)(3)(b) of the Immigration and Nationality Act, members of an FTO are inadmissible to the United States and ineligible for most immigration benefits. Moreover, this restriction appears to be applied retroactively. For example, an Iranian national drafted into the IRGC in the 1990s would still be automatically denied a visa under section 212(a)(3)(b), even though their service was compulsory, concluded and there was no terrorist designation at the time of their service. As a result, the designation has barred millions of otherwise eligible Iranians from securing a visa and traveling to the United States.

This dynamic was illustrated by a recent rejection involving Alireza Ghorbani, one of the most prominent traditional Iranian singers in the diaspora who has performed across the world, including in the United States. Ghorbani was scheduled to headline a sold-out concert in Costa Mesa, California, to celebrate the Persian New Year Norooz and worked with the Farhang Foundation to secure a visa. However, he was shockingly blocked from boarding his flight in Canada and interrogated for hours, denied entry, and barred from entering the U.S. indefinitely. The reported cause was his decades-old compulsory service in the IRGC.

Ghorbani’s case was a high-profile example of the impact of this policy, but there are many more examples of loved ones who have been kept apart because a former IRGC conscript has been unable to obtain a visa under the new restrictions.

Could there be a Deal on the FTO Designation?

Iran appears to be making a rescission of the FTO designation a must-have in any agreement to reconstitute the JCPOA. Given politics in Iran, it would be difficult for any Iranian administration to leave a major Trump-era provocation against the IRGC in place.

This was underscored last month when Iranian Foreign Minister Amir Abdollahian appeared to indicate that the IRGC gave Abdollahian permission to sidestep the matter of the FTO designation to pursue a deal that is in Iran’s interest. He came under immediate attack from media close to the Supreme Leader in Hossein Shariatmadari, who warned Abdollahian’s “error was to mistakenly label what is surrender as a sacrifice, and even worse, to attribute this surrender to the commanders of the Guard [Corps].” Iran’s subsequent remarks have clarified that flexibility on the matter should not be exaggerated, as Iran will adhere to its red lines and that lifting the designation is necessary.

Given that the fate of the nuclear deal appears tied to the FTO designation, and the designation is largely symbolic given the overlapping authorities targeting the IRGC, the major question appears to be under what circumstances the designation could be lifted. Here, the Biden administration may be trying to separate out the designation from the nuclear issue to the greatest extent possible. One possibility – pushed by Iraq’s caretaker government – is that Iran would agree to “a written commitment to abide by a truce across the region and to call on its affiliates to exercise restraint and reduce tension or any activity that the Islamic Republic may be perceived as being responsible for.” In return, the designation on the IRGC would be lifted by the United States, which could then lead to follow-on negotiations aimed at lowering tensions. Such an agreement could be a major win for all parties, as it would clear the path toward a nuclear deal and de-escalate outside tensions that also risk war.

However, it is far from certain that such an agreement could be achieved. In Iran, there is likely reluctance to agree on an area beyond the scope of the 2015 agreement, lest it lend the impression that pressure led to greater concessions. And in the U.S., there will be political resistance to any lifting of pressure on the IRGC, regardless of how symbolic. Hopefully, a key brick in the sanctions wall will not be allowed to tank the historic deal that is the best and only path to deescalation. But success is far from guaranteed.

Photo of U.S. Envoy to Iran Robert Malley speaking at the Doha Forum, via CNN.