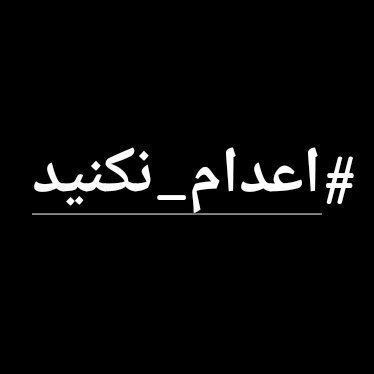 NIAC Statement on Iranian Calls for a Halt to Executions

Yesterday, millions of Iranians joined in one call: “Do not execute” (اعدام_نکنید#). The hashtag trended worldwide and united Iranians from all walks of life and different political persuasions in response to reports of the looming executions of three youths arrested in connection to last November’s country-wide protests: 25-year-old Amir Hossein Moradi, 27-year-old Saeed Tamjidi, and 25-year-old Mohammad Rajabi.

Some reports suggested today that Iran’s judiciary head had ordered a retrial, which would effectively halt the executions for now. Though the status of their case is not confirmed as of this writing, it is clear that public pressure has had an impact and we hope Iranian authorities will make the right decision.

The politically motivated sentences were upheld by Iran’s Supreme Court this week following a trial described by Amnesty International as “grossly unfair” wherein the three individuals “were denied access to lawyers during the investigation phase and say they were tortured.”

However, as the online outrage took hold, Iranian authorities throttled the internet in an attempt to stifle dissent. Sadly, the case of these three youths reflects the broader, ruthless repression faced by Iranians for decades at the hands of their own government. What remains clear, particularly after yesterday’s outrage, is that the Iranian people thirst for a better future: one free of death, violence, and retribution.

NIAC has monitored this case for weeks, highlighting and condemning the mistrial of justice in both our Human Rights Tracker and our Iran Unfiltered news digest and earnestly joined the massive online movement of activists, artists, athletes, and other civil society members in calling for an immediate halt to this slate of executions.

We are committed to upholding the international human rights obligations that bind all governments to protect the universal rights of all people. We demand our own U.S. government uphold its human rights obligations at home and in its foreign policy on areas like the imposition of sanctions or deployment of military force, and we condemn and call for an end to the Iranian government’s politically motivated prosecutions and the silencing of dissent that violate its obligations.

Our support for human rights also means pressing our government to adopt foreign policy strategies that we believe can lead to true, sustainable victories on human rights—policies of diplomatic engagement, ending Iran’s isolation, and other efforts that may not provide immediate gratification, but which we believe are the long term path and hard work needed to establish real accountability and norms to protect the Iranian people’s universal rights.

NIAC strongly reiterates its call on the Iranian government to abide by its international human rights obligations. We will continue to monitor this case alongside our campaign to spotlight the egregious human rights abuses in Iran.