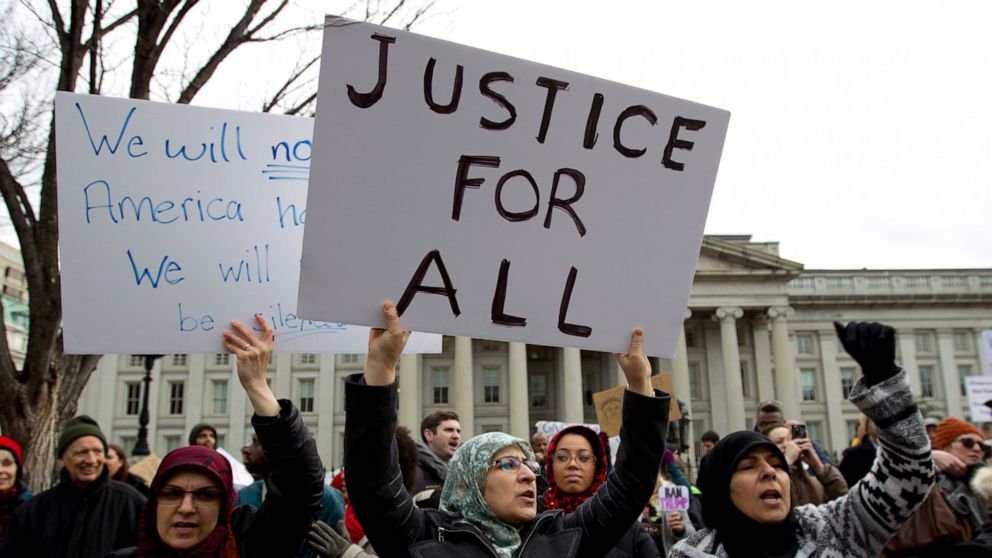 Washington, DC – Jamal Abdi, President of the National Iranian American Council (NIAC), issued the following statement on the passage of legislation ending the Muslim ban and other discriminatory immigration orders:

“The passage of legislation to end the Muslim ban is a decisive victory for everyone impacted by this disgraceful ban that is rooted in Trump’s bigotry. If you feared for a loved one detained or deported by one of Trump’s bans, were separated from a loved one because of where they were born, or simply showed up to protest this un-American and discriminatory order, this vote today was for you.

“There is a direct line from Trump’s illegal and unlawful order, implemented in part by DHS officials across the country, and the illegal crackdown on peaceful protesters across our country today. At every juncture where people should have stepped up and halted Trump, there have been enablers who have helped erode our democracy. The House of Representatives deserves credit today for voting decisively against the Trump Administration’s original sin in the Muslim ban, as well as enacting protections to guard against similar discriminatory orders.

“We would not have achieved this milestone without the tireless work of advocates across the country, including the countless Iranian Americans who continue to demand No Muslim Ban Ever. Nor would we have secured this vote without our key allies in civil rights groups like the ACLU, CAIR, NILC, Muslim Advocates and so many more who stood up for American values and helped craft far-reaching legislation to overturn the ban. Legislators including Reps. Judy Chu, Zoe Lofgren, Jerrold Nadler and Speaker Nancy Pelosi deserve tremendous credit for their work to build support and secure a vote on this important legislation.

“Rep. Pramila Jayapal, as well, should be commended for her work against the Muslim ban and for shepherding the Access to Counsel Act through the House today, which would provide additional protections to individuals unjustly detained and threatened with deportation at the border. The importance of this provision was heightened when dozens of Iranian Americans and Iranian nationals alike were unjustly held at the Blaine Port of Entry in Washington earlier this year.

“Needless to say, the fight is not over. The Senate should immediately take up this bill and pass it. However, we unfortunately doubt that Majority Leader Mitch McConnell has the courage and moral clarity to allow a vote that would rebuke the bigoted President he has defended since Day 1. That means we need to elect new leaders who will end this ban once and for all. Joe Biden has pledged to NIAC Action and other groups that he would end the ban on Day 1. We look forward to working to make sure that pledge is fulfilled.”