The Best Protection Against “Sneak Out” is an Iran Nuclear Deal 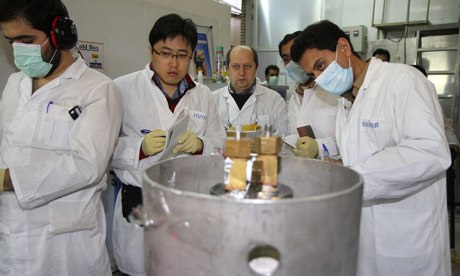 As negotiations with Iran have continued, one issue that has been raised is the concern of an Iranian “sneak out” to a bomb. Skeptics of the diplomatic process have even claimed that, under a nuclear agreement that increases inspections and verification mechanisms over Iran’s nuclear program, Iran could still maintain undeclared nuclear facilities that would give it a secret pathway to weaponization. However, far from making the case against a nuclear deal, these concerns strengthen the case for diplomacy because the best way to protect against “sneak out” is through stringent inspections and monitoring mechanisms–which can only be achieved through a diplomatic agreement.
There are several measures that can be taken to drastically decrease the possibility of an undeclared Iranian nuclear site and its breakout potential. Already, under the current Joint Plan of Action (JPOA), measures have been taken to monitor Iran’s uranium procurement and prevent it from being used for covert activities. An important part of the Additional Protocol which was included in the JPOA is the ability of IAEA inspectors to visit Iran’s uranium mines and milling facilities. This is crucial because it allows inspectors access to Iran’s uranium holdings, allowing them to judge whether or not Iran’s program is exclusively peaceful or whether some amount of their uranium has been diverted to a covert facility. This is just one of the many types of inspections that Iran has agreed to under the JPOA, and can be increased under a final deal.
To start with, any final deal will require that Iran implement and ratify the IAEA Additional Protocol. The Additional Protocol will allow IAEA inspectors to investigate all aspects of Iran’s nuclear fuel cycle–from uranium mines, fabrication of fuel rods, enrichment sites, and waste dumps–and to access all declared nuclear sites without prior notification. Measures like these will not just enable the IAEA to ensure that declared nuclear sites are limited to exclusively peaceful purposes, but to detect attempts to divert any materials if there is an undeclared site.
Beyond the Additional Protocol, the P5+1 will likely push for further inspection measures to protect against undeclared nuclear activities. The IAEA could monitor the importation of nuclear related goods, and then compare this with the amount being used by the Iranian program to ensure that there are no discrepancies between what is being imported and what is being used at declared facilities. Measures such as these will drastically reduce the risk that Iran will pursue covert nuclear research through making such actions very difficult to achieve without detection by the international community.
Based on previous Iranian actions, the concern about protecting against undeclared nuclear facilities is not unreasonable. But these concerns demonstrate why a deal that is strong on inspections and monitoring mechanisms is so important. The alternative to a deal is less inspections, less verification, and less eyes and ears to detect and deter against “sneak out.” If negotiations break down, even the increased access granted to inspectors under the interim JPOA will disappear, leaving the IAEA with few options to verify that Iran no longer has covert sites and increasing the danger of military action. The bottom line: unless you want to put boots on the ground, you should support negotiations to put more inspectors on the ground.

Initial reports out of the on-going P5+1 negotiations with Iran in Almaty, Kazakhstan suggest optimism on behalf of diplomats and hints of concessions by both sides. The first day of talks concluded with Western diplomats presenting Iran with what they say is a “real, serious, and substantive” proposal that creates a pathway towards sanctions relief. […]