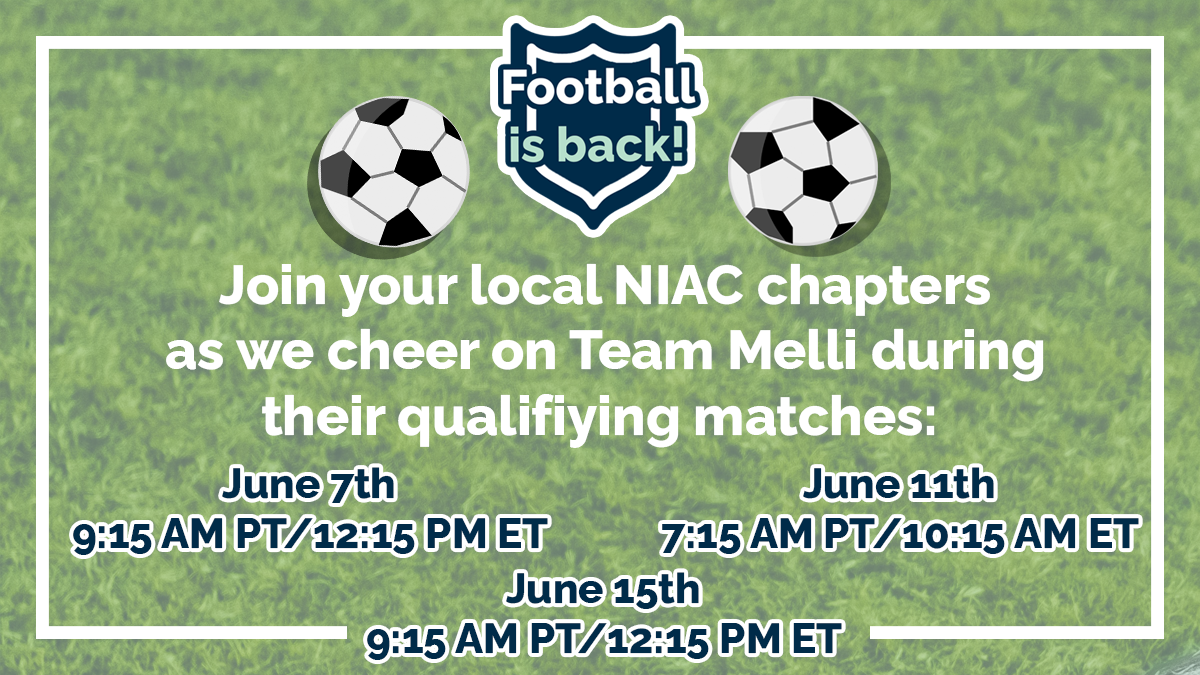 The Iranian National Team has three huge matches coming up for qualification to the World Cup in 2022 in Qatar. Our local NIAC Chapters will be hosting Team Melli watch parties this month and streaming the games live! So please join us for Zoom watch parties to support Team Melli during their upcoming matches. You can RSVP for your desired watch party by using the links below!

Iran currently sits in 3rd place in their group with 6 points. They are behind Iraq and Bahrain, who sit in 1st and 2nd. Therefore, Iran must finish at least the top 2 in the group. Otherwise, they are eliminated from World Cup Qualifying. Iran won 3-0 in their match against Bahrain on Monday as they look to avenge an earlier 1-0 loss against them that happened earlier in the campaign. Next, on Friday, June 11 at 7:30 am PT, they play Cambodia, whom Iran defeated a whopping 14-0 earlier. Then the last and the probably most crucial match will come against long-time rivals Iraq on Tuesday, June 15 at 9:30 am PT.

The player to watch closely during these matches will be standout striker Mehdi Taremi who just completed a prolific season for FC Porto in Portugal. The 28-year-old native of Bushehr, Iran, was one of the best goal scorers in Europe this season. His career came to prominence after a successful four-year spell with Persepolis. This allowed him to be covered by one of the most storied teams in Portugal, which is Porto. This season at Porto, he is remembered for being the first-ever Iranian player to score in the knockout stages of the Champions League. His first leg against Juventus proved vital as it helped Porto knock out a legendary side led by Cristiano Ronaldo. He followed that up with one of the season’s goals with a spectacular bicycle kick against Chelsea, who went on to win the Champions League. Mehdi Taremi will look to continue his hot streak and propel Iran into the next round of World Cup qualifying.

Persepolis and Esteghlal are the two most storied clubs in the history of Iran. These two clubs consistently produce the best talent for Team Melli. Both clubs are located in Tehran, the capital of Iran. With Persepolis, you are either a fan of red “ghermezeteh” or Esteghlal blue “abieteh.” This rivalry ends with the most significant two games of the year as Stadium Azadi fills up with 100,000 people. Persepolis was established in 1968 and has attracted some of the most influential Iranian players such as Ali Karimi and Ali Daei. Esteghlal was founded in 1945 and has also attracted great Iranian talents such as Nasser Hejazi and Javad Nekounam. The rivalry between Esteghlal and Persepolis is rated as the biggest derby in Asia. However, players and fans of these teams come together when it comes to the national team. People want to see the Iranian national team succeed. That means putting differences and rivalries aside to reach a common goal of making the world cup and going farther in the competition than Iran ever has before.

PLEASE READ CAREFULLY.  THIS IS A LEGAL AGREEMENT THAT AFFECTS YOUR LEGAL RIGHTS. RELEASE AND WAIVER OF LIABILITY In consideration for the opportunity to participate in the National Iranian American Council’s (NIAC) events, I hereby release and forever discharge and hold harmless NIAC and their respective officers, directors, employees, agents, successors and/or assigns (collectively “NIAC”) […]