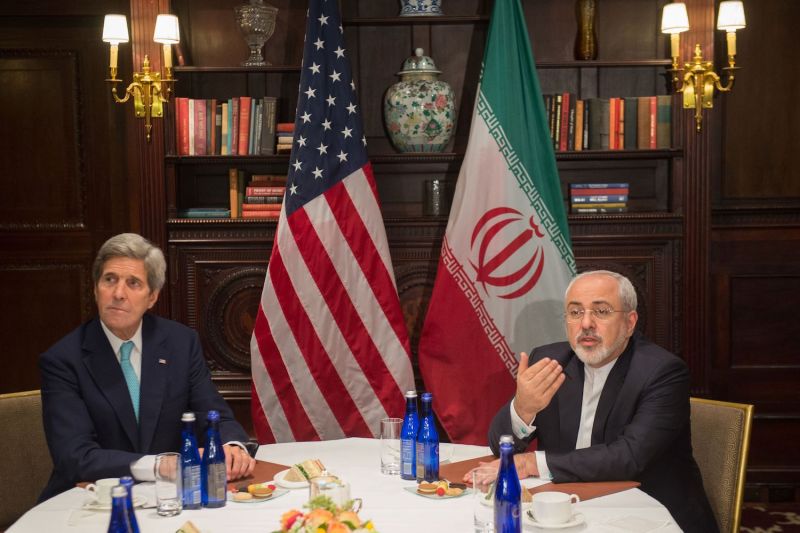 However, Iran technically remains in the deal and has said the steps it has taken to reduce compliance reflect a measure in the accord. In announcing the fifth and final step, Iranian officials also said the IAEA will maintain the same level of inspections access and that Iran was prepared to fully return to its commitments if the other parties to the deal met their obligations on sanctions relief. They also said that going forward Iran will develop its nuclear program in accordance to its “technical needs.”

Zarif added in his remarks this week that Iran had already triggered the JCPOA’s dispute resolution mechanism in November 2018. He stated: “The Islamic Republic of Iran officially started the discussion of resolving disputes in May 2018 after America left the deal. Three letters were sent on May 10, 2018, August 26, 2018, and in November 2018 to EU Foreign Policy Chief Frederica Mogherini and in these it was officially declared that Iran would initiate the accord’s dispute resolution mechanism.”

Zarif added: “In the letter that was written to Ms Mogherini in November 2018, we emphasized that Iran had triggered the dispute resolution mechanism and reached the end of this process, and that thus we had no choice but to begin reducing our compliance with the deal.”

Zarif said that after this letter, Iran gave the European Union “seven months [to meet its obligations] and in May of 2018 began reducing compliance with the deal.” Zarif then said that Europe’s actions on the JCPOA and triggering the dispute resolution mechanism were in “no way legal.”

Zarif further said about Iran’s compliance with the NPT: “If the Europeans take more actions, based on the letter of President Rouhani in May 2018, the issue of Iran leaving the NPT will be brought forward.”

The Guardian Council disqualified 80 incumbent members of parliament from running for reelection, out of a total of 290 members in the body. According to the conservative Tasnim outlet, “80 reformist and principlist (conservative) representatives” have been disqualified. The parliamentary election is on February 21, 2020.

Abbas Ali Kadkhodaei, the Guardian Council’s spokesperson, said the disqualified candidates would have five days to appeal the disqualification. This five-day window ended on January 16th.

President Rouhani condemned the disqualifications. He stated: “The people like diversity. Let all parties and groups participate in elections. There will certainly be no cost. You can’t run the country with one faction.”

In response, Guardian Council spokesperson Kadkhodaei accused Rouhani of advancing an “anti-national project.” He stated: “Creating controversy to approve people who aren’t qualified is not new. But the president entering this anti-national project is regrettable.”

In October, Rouhani also spurred hardline backlash after he said Iran’s first post-revolutionary parliament was the “best parliament” and its election was the “best election.” This parliament was elected in March 1980 and was comprised of a wide-range of political groups, including the National Front, the Mujahedin-e Khalq, and other groups that were eventually excised by the Islamic Republic.

After IRGC Gen. Qassem Soleimani was assassinated in a U.S. drone strike at the Baghdad International Airport, massive funeral processions were held across Iran and Iraq. Soleimani was killed alongside Iraqi PMU commander Abu Mahdi al-Muhandis and several others. Official funeral processions for them brought out massive crowds of mourners–seemingly in the millions–in the Iraqi cities of Baghdad, Karbala, and Najaf, and then in the Iranian cities of Ahvaz, Mashhad, Tehran, Qom, and Kerman.

After Soleimani’s killing, Iran’s Supreme National Security said Iran would respond with “harsh revenge” at an “appropriate time and place.” This was followed by a ballistic missile strike at the Ain Al-Assad military base in Iraq, which is the largest base in Iraq hosting U.S. troops and military equipment. There were no U.S. fatalities in the attack, which Iran gave advanced warning of, but the attack marked a precision strike on U.S. facilities.

During Soleimani’s funeral procession in his hometown of Kerman, a stampede broke out and led to 56 deaths.

Ali Rabiee, the Rouhani administration’s spokesperson, has claimed that no administration official knew that Ukrainian passenger jet 752 was shot down by an Iranian missile until days later. The aircraft was shot down early in the morning on Wednesday, January 8th, after an Iranian missile attack on U.S. bases in Iraq in retaliation for the U.S. assassination of IRGC Gen. Qassem Soleimani.

Rabiee said that no Rouhani administration official knew that an Iranian missile shot down the aircraft until the evening of Friday, January 10th. Until then, government officials attributed the downing to a “technical error” and denied Iran shot down the jet. On the morning of January 11th, the General Staff of the Iranian Armed Forces announced the plane was accidentally shot down amid high U.S.-Iran tensions and a potential U.S. attack.

Rabiee stated: “No administration official including the president himself knew the main reason for the crash of the aircraft until the evening of Friday, which was due to unintentional defensive fire.”

Rabiee said that until then, Rouhani administration officials were going by the intelligence they were given. This was that “missiles had no role in this incident.”

President Rouhani called the shootdown of the aircraft a “great mistake and unforgivable.” He said the judiciary should set up a “special court with senior judges and dozens of specialists” to investigate the issue. He added: “The whole world will be watching our courts.”

Rouhani, who served as the head of Iran’s air defense systems for years, said many people were responsible for the incident. He stated: “Given the familiarity I have with air defense I know that it’s not just one person that is responsible. There are others. I want this to be made clear honestly to the people. It needs to be made clear to the people who was involved in this oversight.”

Rouhani also demanded accountability over when military officials reached the conclusion that a missile took down the aircraft, and why the rest of the government wasn’t notified until Friday.

On January 11th and 12th, after authorities announced the Ukrainian airliner was shot down accidentally, protests erupted in many Iranian cities. According to BBC Persian, “hundreds of people gathered in demonstrations in Tehran, Isfahan, Rasht, Kerman, Shiraz, Hamedan, and Borujerd to protest the lack of transparency about the reason for the passenger plane’s crash.”

In protests at Tehran’s Amir Kabir University and Sharif University, slogans were chanted against Supreme Leader Ayatollah Khamenei and the IRGC. Demonstrators also called for the prosecution of the parties responsible for the incident. They also called for Khamenei’s resignation.

Anti-riot police appeared at many of the protests in Tehran and fired tear gas and hit demonstrators with batons. According to an eyewitness talking to BBC Persian: “When the slogans weren’t too radical, they [the riot police] didn’t do anything. But when Khamenei’s name was mentioned, they fired tear gas.”

According to BBC Persian, one video circulating on social media appeared to show women wounded from gunfire. BBC Persian stated: “In this video that says it was shot around Azadi square, several wounded women are seen. It appears that the cause of their injuries are bullet fire from security forces. This is as Tehran’s police chief purports that security forces have not fired at protestors.”

Many of the victims of the shot down Ukrainian passenger plane were Iranian students who were returning to Canada for their studies.

On January 16th, official funeral ceremonies for victims of the shoot down were held in different cities, including Tehran, Sanandaj, Mahabad, and Kermanshah. According to BBC Persian, many were marked by anti-government slogans and security forces were present at some of these processions.

Other funeral processions took place in Isfahan, Yazd, Hamedan, Zanjan and Qom, where the victims were from. According to BBC Persian, Iranian State TV aired some of the processions, but not the ones where anti-government slogans were shouted.

Ayatollah Khamenei delivered a far-reaching a speech at Tehran’s weekly Friday Prayer ceremony, the first time he spoke at this podium in over eight years. Khamenei spoke on Gen. Qassem Soleimani’s assassination, the shootdown of the Ukrainian airliner, Europe triggering the JCPOA’s dispute resolution mechanism and the potential for negotiations, Iran’s upcoming parliamentary election, regional issues and Iran-Iraq relations.

Khamenei said the past two weeks were historic and consisted of “sour and sweet events and incidents that had lessons for the Iranian people.” Khamenei said that Soleimani’s funeral procession across Iran and in different parts of the region were a “day of God.”

He stated: “Yom Allah (Day of God) is a day when humans can witness the power of God’s hand in events. That day when tens of millions of people in Iran and hundreds of thousands of people in some countries came to the streets for the head of the Qods Force of the Revolutionary Guards and held the biggest funeral in the world, was a Day of God.”

Khamenei then lauded the Qods Force—which Soleimani headed—and said it went beyond being an “administrative organization.” The Qods Force is a “human institution with great and clear human motivations … The Qods Army is a force that looks at everyone everywhere. Warriors without borders, warriors that will appear wherever needed. They preserve the dignity of the oppressed.”

Khamenei stated that the funeral processions for Soleimani showed that the “Iranian nation loves symbols of resistance.” He added: “The Iranian nation showed it supports resistance. It does not support surrender. Some try to portray something else in the court of public opinion, they don’t act honestly. This is the nation, the nation supports steadfastness and resistance. The nation supports standing up to this clown [Donald Trump].”

Khamenei then said the shooting down of the Ukrainian airliner was a “regrettable and sour” accident. He added: “It burned our heart in the truest sense. Losing our dear youth, our good people, people who came here from other countries, was undoubtedly a sour accident.”

Khamenei added that “our enemy” was happy about the plane downing. He went on: “They felt they attained something they could use to question the Revolutionary Guards and the Islamic Republic.”

Khamenei further said about the shoot down: “I sincerely repeat again that I sympathize with the victims of this tragedy and share their grief. I thank the mothers and fathers and all those mourning that, even though their hearts are full of grief, they stood against the enemy’s plans and aims.”

Khamenei then discussed the JCPOA’s European parties triggering the deal’s dispute resolution mechanism, which could lead to a process that would reinstate UN sanctions on Iran. Khamenei said that “from day one I said I don’t trust them” and that these same countries “helped Saddam Hussein” during the Iran-Iraq War.

He added: “After one year, they showed that they are America’s lackey’s in the truest sense. These little governments are waiting to bring the Iranian nation to its knees. America couldn’t achieve this, you (the UK, France, and Germany) are too small to achieve this.”

Khamenei then said that a high turnout in the upcoming election would be the “most important sign of our strength.” Khamenei said that “in the election the presence of the people provides insurance for the country.” He added that the “enemy” wants to reduce turnout and “taint” the election.

Khamenei delivered the rest of his speech in Arabic and had specific comments on Iran-Iraq relations. He stated: “There have been many lopsided efforts to create conflict between the Iranian and Iraqi nations. Immense amounts of money has been spent. They have used irresponsible people in Iran and in Iraq to engage in satanic propaganda against each other.”

Khamenei stated that the “martyrdom” of Soleimani and PMU commander Abu Mahdi Al-Muhandis “thwarted all these efforts.” He then said that Iran’s missile attack on U.S. bases in Iraq made the threat of war more “distant.” He added that the “aim of America is a civil war in Iraq and the partitioning of Iraq and the elimination of resistance forces.”