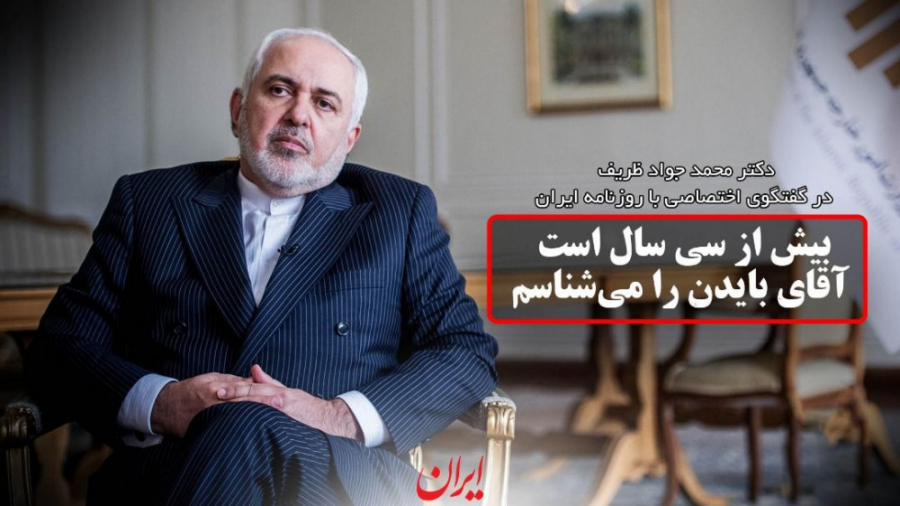 Zarif said the Trump administration did not reach its aims with respect to Iran. He acknowledged that Trump’s sanctions have imposed economic pain on Iran but said “America’s policy was defeated and the longer they continue it the more it will fail.”

Zarif said Iran’s stockpile of enriched uranium and its advances in nuclear research and development are “incomparable” to the period before Trump. He stated: “This shows that not only has America not reached its aims, but it is farther from them.”

Zarif added: “This is a net negative for them. Some think Biden will enter the field with leverage. No, Mr Biden will enter with a very negative score because of the important nuclear achievements of Iran in the period of Trump.”

Zarif then pivoted to what he said are America’s responsibilities under the UN charter. He said that as a UN member, America is obliged to abide by Article 25 of the UN charter, which states: “The Members of the United Nations agree to accept and carry out the decisions of the Security Council in accordance with the present Charter.”

Zarif said America must carry out its JCPOA commitments based on its UN obligations, namely UN Security Council Resolution 2231, which endorsed the JCPOA. He stated: “Trump by withdrawing from the JCPOA only gave up America’s privileges under the JCPOA.”

Zarif said it is “very good” that Biden seeks to return to the JCPOA. He said: “one part of this is implementing their commitments as a UN member; they must lift sanctions; they must cease the destructive actions Trump has taken that are contrary to Resolution 2231.”

Zarif said the “second part” would be the JCPOA. He stated: “If they want to return to the JCPOA, they are not in the position to set conditions. Because the Americans gave up their privileges as a JCPOA member and now seek to regain them.”

Zarif said it “must become clear that Iran will not accept any conditions.” He stated: “What is in the JCPOA is the result of long negotiations. Those who negotiated for the JCPOA did not just read every word of the agreement but debated and bargained over every word.”

Zarif said the “regional and missile issues” were “not easily put aside” during the JCPOA negotiations.  He stated: “On these issues, the Americans and Westerners didn’t have anything to say. For example, about weapons, were the Americans ready to reduce the hundreds of billions of dollars’ worth of weapons they were selling in the region? Were they ready to reduce the range of Israel’s missiles? All these were discussed in tense meetings multiple times. We didn’t move on from them calmly.”

Zarif also said the issue of “the length of limitations” on Iran’s nuclear program was extensively debated until a result was reached. He then stated: “As such, the Americans can’t put aside this reality and say let’s negotiate again over what we gave and what we got.” He added: “Mr Trump made some excesses and spawned new manners that unfortunately some are continuing.”

Zarif said Iran is the side that can “set conditions.” He stated: “Iran must be satisfied and the rest of the 4+1 must be satisfied that America will return to the JCPOA. But America must implement its commitments. It has no other option. America’s option is a return to the deal. Why? Because the resistance of the [Iranian] people defeated the maximum pressure policy.”

Zarif added: “Second, if America wants to become a member of the JCPOA, a membership which Trump destroyed, we are ready to have a dialogue on how the U.S. can enter the JCPOA. Because America is not in a position to set conditions.”

Zarif said U.S.-Iran negotiations are not required for each side returning to its JCPOA obligations. He said if need be, they can communicate through “established channels” (i.e. intermediaries), and that they can meet their JCPOA commitments in a reciprocal manner.

Zarif also said the U.S. should not wait until the Iranian presidential election next June before returning to its JCPOA obligations. He stated: “If the Americans have wisdom, they should know that in Iran these kinds of issues (foreign policy) are formed outside the framework of the presidential administration and they do not have to worry.”

Zarif said the U.S. returning to its obligations under UNSC Res. 2231 would be to the benefit of “America, the world, and Iran.” “He added: “When they return to their commitments, we will too. There is no rush. But we do not have a policy to delay and we should not.” He then said that the U.S. should not have a “policy of delay either” because its approach “so far has been unsuccessful.”

Zarif said a President Biden can return the U.S. into compliance with UNSC Res. 2231 with “three executive orders.” However, he did not give details about what these executive orders would cover specifically.

Zarif said he was hopeful there would be “positive and speedy events” on lifting sanctions. He said he has known U.S. President-elect Joe Biden for “over 30 years.”

Zarif added about his acquaintance with Biden: “When I was UN ambassador, he came multiple times to our UN mission for meetings when he was chair of the Senate foreign relations committee.”

Zarif said Biden is a “veteran on foreign policy, not a novice.” He stated: “My feeling is that he understands international developments and America’s limitations in this context better than Mr Trump.”

Zarif added: “Some of his recent comments show that he understands that unilateralism cannot address the problems facing today’s world.”

Human Rights Watch Calls for Accountability on Anniversary of 2019 Crackdown

November 15th marked the one-year anniversary of the start of protests after a government increase in the price of gasoline. As documented in Iran Unfiltered at the time, the trigger for the protests was the gas price hike but many of the protests expressed broader grievances against the political and economic status quo.

The protests reached over 100 cities and were met with a bloody crackdown. The government also unprecedentedly blocked access to the global internet for a week, while access to the domestic internet was kept online.

Human Rights Watch (HRW) has issued a statement on the anniversary where it says Iranian authorities have failed to provide accountability for the crackdown. HRW’s Iran researcher Tara Sepehri Far states: “One year after the November crackdown, Iranian authorities have avoided any measure of accountability and continue to harass the families of those killed during the protest.”

Sepehri Far adds: “Families of hundreds of victims, most of them from the more vulnerable segments of Iranian society, deserve to see those responsible for the serious rights violations held accountable.”

HRW cites Amnesty International’s figure of at least 304 people being killed in the protests. It states that authorities “continue to sentence dozens of people who were arrested during the protests to imprisonment and flogging” and that “authorities have not published any detailed investigation or held anyone accountable for the alleged abuses.”

HRW has called on the “UN Human Rights Council to establish a UN-led inquiry into the serious human rights violations by the Iranian authorities during and after the protests.”

Ali Rabiee, the spokesperson for the Rouhani administration, responded to a New York Times report that U.S. President Trump sought options to bomb Iran’s nuclear sites. According to the Times, Trump was ultimately dissuaded by his senior advisors.

Rabiee said Iran would give a “crushing response” to any attack. His full remarks were: “My personal opinion is that such an event [a U.S. attack] for the Americans to endanger regional and global security is impossible given Iran’s response to any aggression will be crushing and severe.”

Rabiee said there was a “psychological warfare” element to the story and Trump’s apparent threat. He said whenever Iran’s economy is stabilizing, there are “immediate psychological operations” to damage it. In recent weeks, the value of Iran’s currency has been strengthening against the dollar.

New Calls Against the JCPOA and for a Military President

Esmaeil Kousari, an IRGC general and advisor to the head of the IRGC, defended an IRGC member becoming the next president. As detailed in a previous issue of Iran Unfiltered, there have been increasing calls from conservatives for the next president to come from a military background.

There are seven months left until the Iranian presidential election in June and it is not clear yet who the main candidates will be. Kousari said there are efforts to make people “afraid” of someone from the military becoming president.

Kousari stated: “What have military people done to make the people afraid? They have sacrificed their lives and thrown the enemy out of our soil. Right now, they are engaged in civil engineering work and work to improve livelihoods. They go with the least amount of support to the farthest points and work. We should see the experience of these people.”

Kousari also asked: “What have the politicians who have had responsibilities for 40 years done?

Kousari went on: “They are afraid a military person will get responsibilities and make a stronger stand against the enemy.”

Meanwhile, Saeed Jalili, who served as Iran’s chief nuclear negotiator during the Ahmadinejad presidency, blasted the JCPOA in recent tweets. Jalili is widely believed to be considering running for president next year.

Jalili said the JCPOA was “nothing but damaging” for Iran. He said Iran gave one-sided commitments and the result was more sanctions.