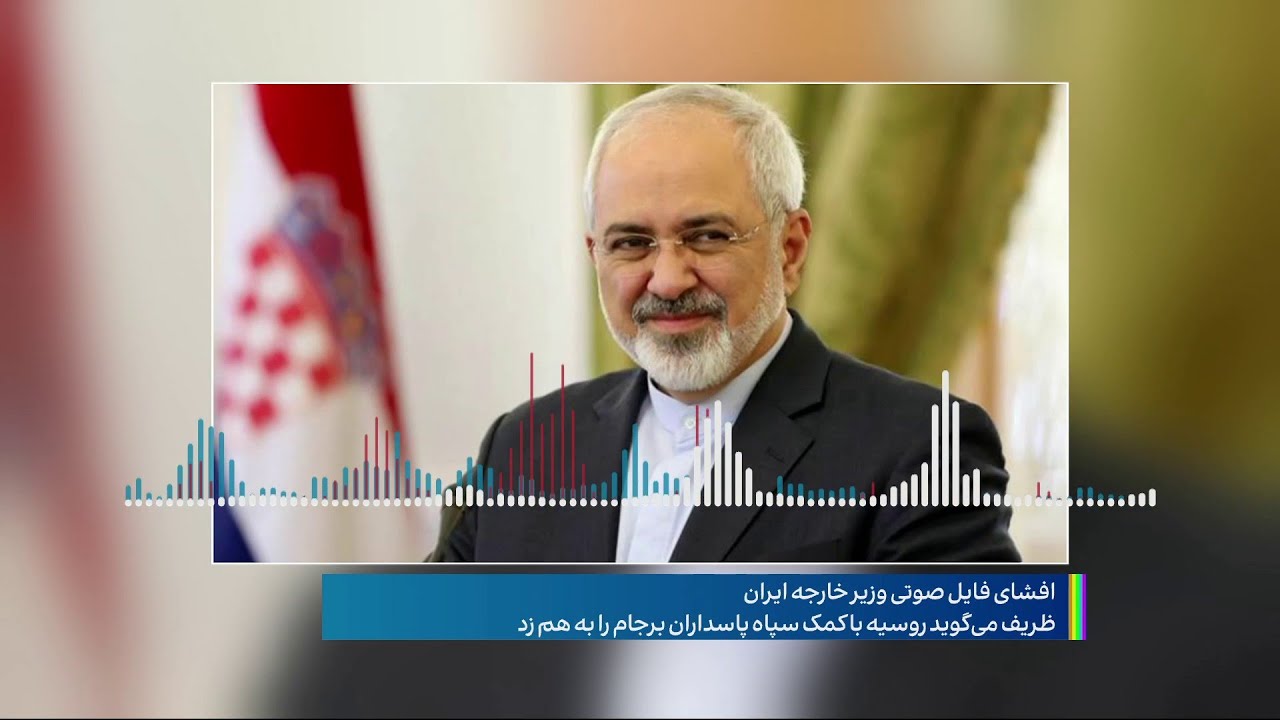 An audio recording of a classified interview with Foreign Minister Zarif for governmental records has been leaked. The interview was done February 24th as part of an “oral history” project carried out by the Rouhani administration, which included private interviews with other ministers and officials.

Zarif’s interview was over 7-hours long and roughly 3 hours of it was leaked online. It is not clear who leaked the interview and Rouhani has called on the intelligence ministry to investigate the matter. Tehran’s prosecutor is also seeking to identify who leaked the classified audio recording.

In the interview, Zarif touches on a broad range of topics, including the JCPOA negotiations, the role of the military and diplomatic fields in Iran’s foreign policy, and Iran’s relations with the United States.

Zarif said “Russia’s aim was for the nuclear deal not to happen.” He said Russia started creating obstacles in 2015 when it saw a nuclear agreement was close.

Zarif stated: “The Russians didn’t think the JCPOA would reach a result and in the final weeks when they saw the JCPOA was being concluded they started new proposals.”

Zarif said at this juncture, Russia and France introduced a proposal that would have required the UN Security Council to renew the JCPOA every six months. He said Iran would have been required to negotiate with all five permanent members and 10 rotating members of the UNSC every six months.

Zarif said Russia made “maximum efforts” to prevent the JCPOA from being reached. He cited Russian foreign minister Sergei Lavrov prematurely leaving the negotiations and not being in a famous picture of the foreign ministers of Iran and the P5+1 after the deal was reached.

Zarif said it was “enough to review the six months” after the JCPOA was reached, from July 2015 to January 2016, to see how various forces tried to sabotage it. He said this period ended with an attack on the Saudi embassy in Tehran and the seizure of two American navy ships in the Persian Gulf. Zarif’s implication was that these were orchestrated by Iranian hardliners to sabotage the deal’s implementation. Zarif said Iran’s nuclear negotiators were “stabbed from the back.”

Zarif said this period began with Qassem Soleimani’s trip to Moscow. Soleimani is the late commander of the IRGC’s Quds Force, responsible for operations in the Middle East. He was assassinated by a U.S. drone strike in January 2020.

Zarif said Russia invited Soleimani to Moscow in July 2015, with Russia’s aim being to “demolish” the JCPOA. Zarif said the foreign ministry tried to organize a trip by Soleimani to Moscow several years earlier, when the Syrian civil war was headed in a more dire direction for Iran and its allies, but Russia rejected this at the time.

Zarif stated: “Russia accepted Soleimani travelling to Russia only after the JCPOA was signed.”

Zarif also discussed Russia’s decision to use Iranian airspace for flights by its military aircraft to Syria. He stated: “Why, when Russia could have used the Mediterranean to strike Syria, did it use Iran? Why did Russian aircraft fly over Iran? All these events are from after the JCPOA.”

Zarif says he investigated the matter and asked the Roads Minister if Iran Air was having flights to Syria, who said it was not. Then the Roads Minister asked the head of Iran’s Civil Aviation Authority if this was occurring, who confirmed it was after Soleimani had pushed for it.

Zarif says he then asked Soleimani why Iran Air was being used for flights to Syria and not Mahan Airlines like in the past. Zarif says Soleimani replied this was “because Iran Air is more secure.”

Zarif said Soleimani prioritized the military field, even if it came at a cost to Iran’s diplomatic efforts. He said in Iran there is not a “dual government” but that the military field makes the decisions on foreign policy.

Zarif also talked about the accidental downing of a Ukrainian passenger airliner by Iran after Soleimani’s assassination in January 2020. The airliner was shot down in the early hours of Wednesday, January 8th, after being mistaken for a U.S. military aircraft.

Elsewhere in the interview, Zarif also talked about his close ties with Soleimani and Supreme Leader Ayatollah Khamenei. Zarif said about Soleimani and his assassination: “I cried for the martyr Soleimani and every time I saw him, I hugged him. I believe after his passing the country bore an unparalleled blow and this was equivalent to a city being destroyed.”

Zarif said if not for Soleimani, he would have had “no achievements” in negotiations over Afghanistan with the U.S. in 2001. He said the same for Iraq in 2003.

Zarif also talked about his warm relations with Khamenei. He said Khamenei has always treated him with “kindness” and that Khamenei is “one of the country’s strongest diplomats.”

Zarif said what connects him to Khamenei is that they both “believe in the principles of the revolution” and Zarif’s belief that “Iran’s strength is in being revolutionary.”

Zarif said Iran needs to create a “list of what issues we have with America and what issues they have with us.” He said some of these issues are “resolvable,” but some are not.

Zarif said: “We can manage differences with America and there is no need for conflict and tensions.”

The leaked recording of Zarif sparked immense controversy in Iran. Conservatives and anti-JCPOA hardliners have lashed out over his remarks on Soleimani and the military’s role in foreign policy.

Mohammad Bagher Ghalibaf, the conservative speaker of parliament, attributed Zarif’s remarks to “either political games or naivety.” Ghalibaf said the “prudence and courage of Qassem [Soleimani] won the battlefield and opened the door for diplomacy.” Ghalibaf added that he will “not allow opportunists to persecute Soleimani and upturn his historical role to meet their political goals.”

Mansour Haqiqatpour, a member of the parliament’s national security commission, said “we won’t give a single hair of Soleimani to Zarif.”  He accused Zarif of “questioning all of the political system’s pillars.”

Fars News, affiliated with the IRGC, said Zarif’s remarks and “confrontation with the champion of the battlefield” (Soleimani) take him “to the border of political and social destruction.” Fars said the recording was leaked for two reasons: to deflect from the JCPOA’s failure and put the blame for this on the military (IRGC), and to portray the presidency as powerless.

Fars said the “ultimate conclusion” of Zarif’s remarks is that people should not vote since the president has no power. It said this put Zarif in line with “satanic” opposition outlets abroad.

Nasrollah Pejmanfar, the head of another parliamentary commission, said Zarif crossed “the Islamic Republic’s redlines.” He said Zarif must provide the “necessary explanations for his remarks.”

A number of parliamentarians, such as Hossein Haqvoroudi, have called for Zarif’s impeachment. Haqvoroudi said: “Zarif should resign. If he doesn’t we will remove him.”

The parliament’s national security commission has summoned Zarif for questioning. When the tape was leaked, Zarif was on a regional tour, making official visits to Iraq, Qatar, Oman, and Kuwait.

Mojtaba Zolnour, the head of the national security commission, said the Rouhani administration has been infiltrated by foreign spies. He also said it was possible the audio recording was deliberately leaked to influence the upcoming Iranian election.

Meanwhile, President Rouhani said the aim of the leak was to sabotage the Vienna talks on restoring the JCPOA. Rouhani stated: “This audio tape was published right when the Vienna talks are at the height of their success by people who are against Iran, the people of Iran, and Iran’s interests, with the aim of creating differences within Iran.”

Rouhani also said some of the remarks in the tape were not reflective of the views of himself or his administration. He said: “Every minister in the government has their own views they want to say privately for future generations.”

Rouhani said Iran’s military and diplomacy fields are “two arms that pursue one goal.” Rouhani said about Iran’s high-level decision-making process: “All complex foreign policy and defense issues are debated and reviewed in the Supreme National Security Council, where the heads of the three branches of government are together with military and civilian officials. The consensus decision is then reviewed by the Supreme Leader.”

Rouhani also strongly defended Soleimani and said he was “an expert on all important regional issues.” He stated: “Commander Soleimani was intelligent, sincere, selfless, humble and the best foreign policy advisor, at least in the region.”

As a result of the leaked Zarif tape, Hesamodin Ashna, an advisor to Rouhani and the head of Center for Strategic studies, resigned. In his role, Ashna oversaw the “oral history project” to record interviews with government officials, including this interview with Zarif, for classified government records.

Rouhani replaced Ashna with Ali Rabiee, who is also currently his administration’s spokesperson.

The Iranian judiciary has also barred at least 15 people from leaving the country in connection with the tape’s leaking. Officials are trying to identify who “stole” and leaked the tape.

Zarif responded to the controversy over his leaked remarks in a post on Instagram. He said his comments were part of “confidential theoretical discussions” on the necessity to make diplomatic and military fields “complement each other.”

Zarif added: “While I am committed to guarding the country’s interests and its resolute, patient and courageous people to the last second, I have no fear of deceits of deceivers and blames of blamers.”

The third round of negotiations to restore the JCPOA started in Vienna this week. According to Deputy Foreign Minister Abbas Araghchi, the Joint Commission, composed of Iran and the parties that negotiated the JCPOA minus the U.S., reached an agreement to “expedite” the negotiations.

Araghchi said “big challenges” remain in the talks but that they are on the “correct path.” Araghchi said a third working group was started this week in Vienna, focused on the “arrangements” for each side returning to JCPOA compliance.

Araghchi also said Russia and China agree with Iran that all U.S. sanctions must be lifted at once. Mikhail Ulyanov, Russia’s Ambassador to International Organizations who is present at the talks, said in a tweet: “The new round of the Vienna talks started with official meeting of Joint Commission of #JCPOA. The discussions proved that participants are guided by the unity of purpose which is full restoration of the nuclear deal in its original form. It was decided to expedite the process.”

The single-day death toll from COVID reached 496 on April 25th, surpassing the previous most deadly day from last November. Iran is currently experiencing a devastating new peak of COVID-19 infections and deaths.

On April 28th, 385 people were registered as dying from COVID. According to official statistics, over 71,000 have died as of April 28th, and nearly 6,000 are hospitalized throughout the country from the disease.

Vaccinations in Iran are slowly continuing. According to the Health Ministry, just over one million people have been vaccinated in the country.

Iran has also banned flights from India amid a devastating COVID surge there. Iran is also increasing border controls with Pakistan and India and limiting the inflow of people.

Ali Rabiee, the Rouhani administration’s spokesperson, said the U.S. and Iran are engaging in “diplomacy” for a prisoner exchange. Rabiee said that Iran seeks the release of Iranians imprisoned in the U.S. on sanctions violation charges.