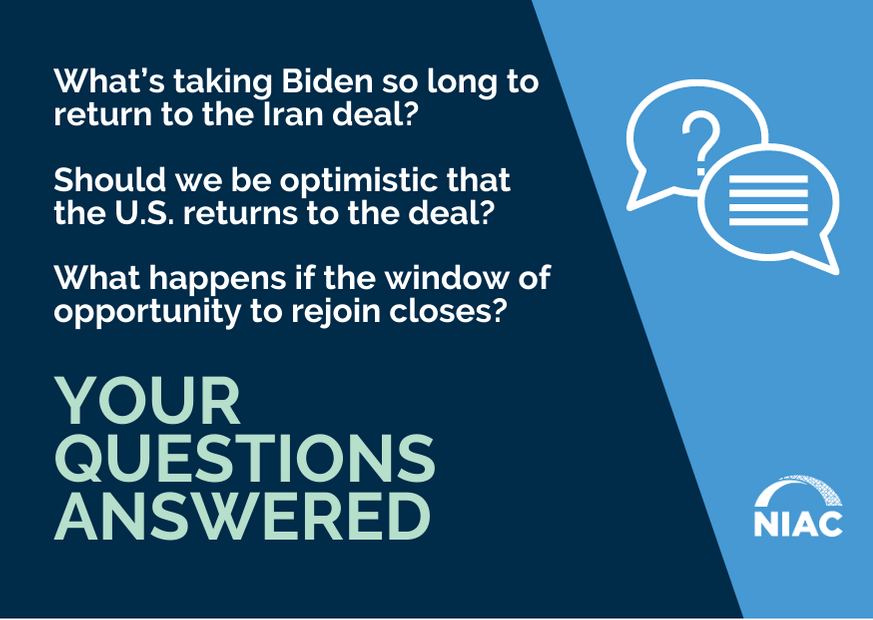 What’s the Deal with the Iran Deal?

It is nearly a month into the Biden administration, and Trump-era sanctions on Iran are still in place. Undoubtedly, many in the community are frustrated by the lack of movement and the perpetuation of inhumane sanctions, amid a pandemic no less. We’re concerned that President Biden may be moving too slowly on fulfilling his campaign promise of returning to the nuclear deal. The administration’s public position that it won’t act unless Iran acts is a recipe for missing this opportunity. We believe it is imperative that Biden demonstrate the political will to reverse the U.S. decision to exit the deal.

At the same time, we recognize Biden is not fully staffed, including in key offices that will structure the lifting of sanctions. Thankfully, it appears that diplomatic momentum is finally building. It has just been announced, following meetings with Europe, the Biden administration has repealed Trump’s “snapback” sanctions claim at the UN and announced the U.S. would agree to join talks with Iran convened by Europe to broker a path to return. Below, we try to give an update on the current state-of-play.

What’s taking Biden so long to return to the Iran deal?

While we would have loved to see sanctions lifted on Day 1 of Biden’s presidency, and recommended as much, the Biden team is cautious and deliberate. The new Iran envoy Rob Malley has spent his first two weeks on the job consulting with parties to the nuclear accord and other stakeholders. This appears to be an effort to forge common ground on how the U.S. can restore the deal.

We are still only a month into the administration, the agreement has many parties and moving pieces, and the administration has urgent domestic priorities amid the pandemic. There also have reportedly been some internal differences about how aggressively to move. Some delay is to be expected, but if diplomacy doesn’t pick up soon the administration will be in trouble.

Is there reason to be optimistic?

Yes. Diplomacy involving the nuclear deal is ramping up. Earlier in the week, Qatar’s Foreign Minister was in Tehran outlining its strong support for the nuclear agreement. German Chancellor Angela Merkel and Swiss President Guy Parmelin have also spoken with Iranian President Hassan Rouhani. Today, the E3 foreign ministers consulted with Secretary of State Antony Blinken and talks to broker a return may be imminent. This back-and-forth is a good sign, as it builds momentum to what all parties say they want: a U.S. return to the nuclear deal.

All of this shuttle diplomacy precedes President Biden’s speech tomorrow to the Munich Security Conference. If the President outlines a new course on Iran, and backs it with tangible steps to demonstrate U.S. goodwill, it could smooth the path to return to the deal and ease sanctions.

What happens if Biden misses this window?

Biden can’t keep Trump’s approach on Iran and expect a different result. Those in Iran supporting engagement and the restoration of the JCPOA can only hold out for so long before hardline voices will prevail. Conservatives in the Iranian parliament have already mandated that Iran reduce access to IAEA inspectors on February 23rd and further nuclear expansions at later dates if sanctions aren’t lifted. And, Iran’s Presidential elections in June could end the window to return to the deal, locking in Biden to Trump’s failed pressure-only approach.

What is NIAC doing?

The nuclear deal continues to be opposed by powerful constituencies who have lied, and been proven wrong, about the agreement. That’s why we are ramping up our efforts to build support for the deal in Congress and the general public. Since President Biden’s election, we have worked with allies to encourage 150 members of Congress to call for a return to the nuclear accord, provided briefs to the administration and media to advocate for our policies, and are in regular consultation with the coalition of groups supporting a U.S. return to the deal to counter misinformation and provide political support for–or pressure on–-Biden to act.

In the days and weeks ahead, we’ll be publishing additional resources explaining the benefits of the deal – both for the Iranian people and global nonproliferation and security. Likewise, we will continue to make the case for swift return with the Biden administration, ensuring they live up to their commitment to restore the agreement and pursue diplomacy to resolve tension with Iran.

The work won’t be easy, and we hope you will continue to support us every step of the way. Make sure to check back in the coming days and weeks to stay up-to-date on developments.