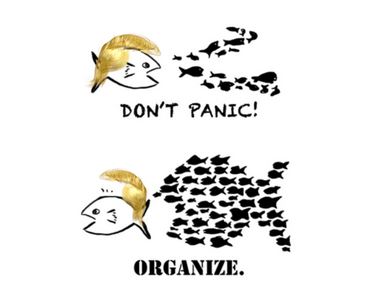 What Does it Mean to Organize the Grassroots?

When I say I’m the Organizing Director of NIAC Action, I often get asked “So what do you do?”. When I say that I build and execute the strategies that mobilize the public to influence our elected officials, I get puzzled faces and confused nods. I get it – organizing is not very intuitive. While prominent people, like Barack Obama, talk about how organizing wins campaigns and elections, most people still don’t entirely understand what it means. Even organizers have a hard time explaining what we do. But one thing we learn as organizers is that people learn best through stories. So I’d like to give a little insight into grassroots organizing by sharing the story of my first campaign victory.

I first dipped my toes into political organizing as a freshman at UC Davis, back in 2011. I had been an environmentalist all my life, so I quickly got involved with a campaign to ban plastic grocery bags in California. For those that don’t know, there is a giant mass of trash over twice the size of Texas floating in the Pacific, called the Great Pacific Garbage Patch. It kills millions of birds and marine life, like the sea turtle, every year. Too much of this trash comes from things that we don’t need, like single-use disposable plastic bags. So one part of the solution is to ban these bags. In California, our strategy was to pass local bag bans to show broad public support and get state representatives to support a statewide bag ban.

With no idea what grassroots organizing was, I dove in, got trained by a professional community organizer, and quickly rose in leadership. By the end of my freshman year, I was running the campaign. Because our opposition consisted of the plastics industry and some very prominent  community members, we knew the only way we could win was to show strong community support for the ban. First, I recruited over 100 volunteers to build the team we needed in order to mobilize our community. Over the next two years, that team collected over 8,000 petition signatures by having one-on-one conversations on campus and at community events. We also ran educational events and press conferences that got local media coverage to build visibility for the campaign. When that wasn’t enough to convince the city council, we contacted those 8,000 petition signers and asked them to email their city council members. We were told the next day that this was the most that the city council had ever heard about any issue. After employing that tactic, along with getting 5-10 people to attend every city council meeting for almost 2 months, we were able to convince the city council to vote on and unanimously pass a single-use plastic grocery bag ban in Davis.

After the vote, the city council members went straight to the students in the room, shook our hands, and told us that they wouldn’t have banned plastic bags if we didn’t push them to do so. Us. The students. A group that people often write off as not having any power. It was in that moment that I realized grassroots organizing is how we make social change happen.

The opposition will always have more money and sometimes better access to decision makers. But if you gather a group of people to grab their clipboards and have one-on-one conversations with their community, we can mobilize the public to the point where our elected officials can no longer ignore our voices. It was right after that meeting that I decided to drop my plans to go to medical school (sorry Mom and Dad) and decided to become a professional grassroots organizer. I have this vision that one day our community will be so organized that everyone running for office comes to us asking what they can do to be a good ally for our community and secure our vote. But we can only do that if everyone does their part. Whether it’s signing an action alert or calling your member of Congress, volunteering on one of NIAC Action’s campaigns, going to a NIAC Power Building Summit, or even becoming a professional organizer like I did. So I hope you share this vision. And I hope to see you on the streets with a clipboard along with me.