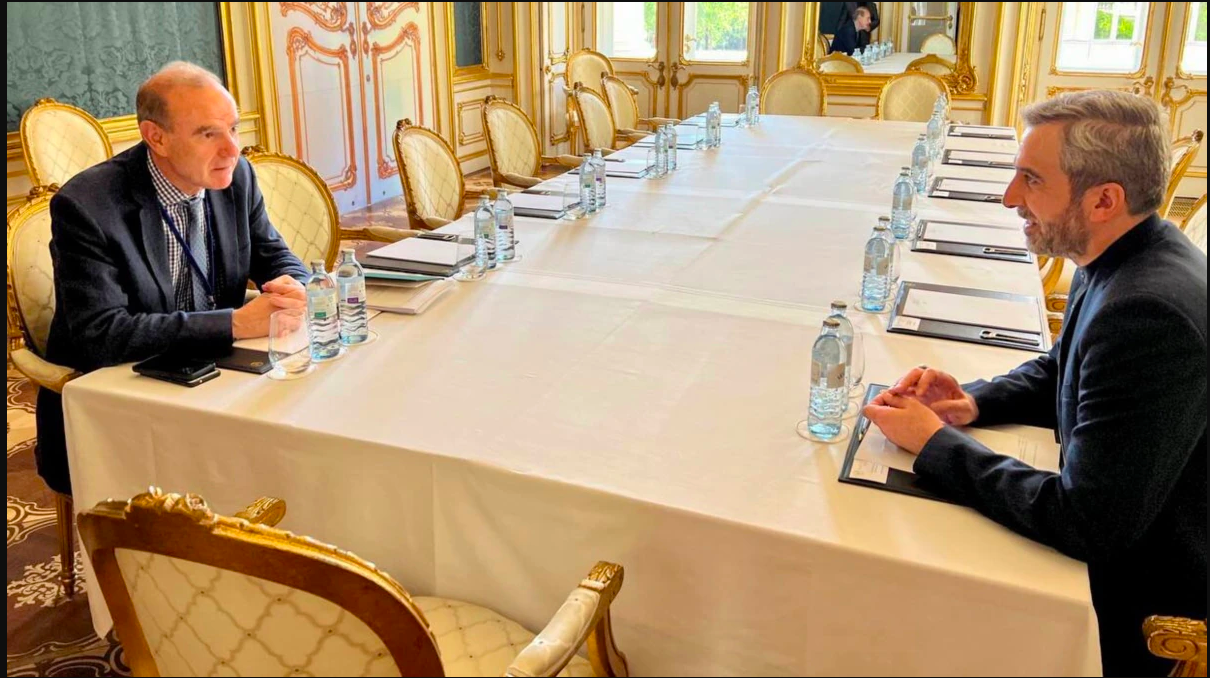 Diplomats from Iran, the U.S., and the P4+1 countries reconvened in Vienna on August 4 for the first time since March to resume the nuclear negotiations. This new round is based on a recent proposal introduced by EU foreign policy chief Joseph Borrell to bridge remaining differences between the U.S. and Iran.

Iran’s Foreign Ministry Spokesman Nasser Kanani has said that this round will focus on Tehran’s ideas on the EU proposal and exchanging ideas. He said he hopes that “the other side with the necessary decisions and serious focus” enables the negotiations to make progress.

The U.S. and the E3 (Britain, France, and Germany) have since March maintained that the text of an agreement is ready and the onus is on Iran to accept it. U.S. officials have blamed Iranian demands that they say go beyond the JCPOA, including that the IRGC be delisted as a terrorist organization, for the talks becoming deadlocked. U.S. President Biden has said will not delist the IRGC even if it means the JCPOA will collapse.

However, ahead of the latest round of Vienna talks starting, the Wall Street Journal reported on August 3 Iran has “for now agreed to set aside its demand to remove the U.S. terror listing on the Guards.” But a day later, Iran’s IRNA outlet cited a “knowledgeable” as denying this. This source stated, “The Islamic Republic of Iran has not set aside its demand for the IRGC to be removed from the terrorist list and media claims about this happening have no credibility.”

The WSJ cited a Western official as saying “an agreement would need to be found by this weekend.” The official added, “If negotiators reach a consensus, foreign ministers would then be called upon to come to Vienna to approve it.”

Meanwhile, Mohammad Eslami, the head of the Atomic Energy Organization of Iran, has said that Iran would not allow for the reinstallation of IAEA cameras at its nuclear facilities unless the agency’s investigation into its past nuclear activities is ended. Iran agreed to these cameras being installed as part of the JCPOA and removed them last year.

The IAEA has said it will not end its investigations into past undeclared nuclear activity in Iran until Tehran answers its questions. Iranian officials have blamed Israel for the agency’s investigation into three suspected nuclear sites and have suggested foreign spies planted traces of enriched uranium which the IAEA discovered there.

However, the WSJ’s Laurence Norman reported on August 4 that Eslami’s demand that the IAEA probe must end as part of a JCPOA deal  is not being pressed by Iran in Vienna.

At a UN conference on the NPT this week, Iran’s UN Ambassador Majid Takht Ravanchi blamed the U.S. for the deadlock in the nuclear negotiations. He stated, “Achieving the goal of fully returning to the agreement has been delayed because the U.S. government has not yet decided to guarantee Iran’s economic benefits promised in the 2015 agreement.”

On August 4, Iran’s top nuclear negotiator Ali Baqeri first met with Mikhail Ulyanov, the Russian representative at the Vienna talks. Ulyanov said afterwards, “I hope this is the last round of negotiations…we are close to the finish line.” But he also cautioned against setting “artificial deadlines” for completing the talks.

Ahead of the Vienna talks, Javad Karimi Qodoosi, a member of the Iranian parliament’s foreign policy and national security commission, said chances for a deal are “high.” He said the EU in its proposal showed some flexibility towards Iran’s demands and “moderated” its positions. But he said differences still existed on economic guarantees.

Qodoosi added: “Given the global geopolitical conditions and the issue of energy prices, the American side will give in to Iran’s demands and we can witness an agreement and the conclusion of the nuclear negotiations.”

Floods Kill at least 90 Across Iran

According to the Iranian Red Crescent, torrential downpours and flooding have led to at least 90 deaths across Iran as of August 3. Heavy rains began in parts of Iran on July 23, including in the provinces of East Azerbaijan, Isfahan, Bushehr, Tehran, and Khuzestan.

The flooding has caused widespread damage to infrastructure, including homes, roads, and bridges. One official said that in Kerman province alone 1200 bridges have been damaged.

Some villages, particularly in the north of Iran, have been mostly destroyed by the flooding. One provincial mayor said that the village of Mazdaran on the outskirts of Tehran was 80% destroyed and 13 people died there.

There have been widespread criticisms of the government’s response and management of the floods. MP Mohammad Reza Rezaee Koochi, who is the head of the parliament’s construction commission, acknowledged that flood management in the country is “weak.” He stated, “Not only do we not have a plan, but this lack of management also endangers the lives and property of our compatriots.”

On August 3, Iran’s meteorological organization said that heavy rains will continue, and flooding could occur in eight provinces in the coming days. It also warned of severe dust storms affecting nine Iranian provinces.

There has been an increased crackdown of members of the Bahai faith in Iran. Since the 1979 revolution, Iranian authorities have viewed Bahaism as heretical and members of the religion face institutional discrimination, including denial of university education.

The Bahá’í International Community (BIC), based in Geneva, issued a statement on August 2 decrying the confiscation and destruction of homes belonging to Bahais in the village of Roushankouh in northern Iran. The BIC stated, “Every day there has been fresh news of persecution of the Baháʼís in Iran, demonstrating unmistakably that the Iranian authorities have a step-by-step plan that they are implementing.”

The Human Rights Activists News Agency (HRANA), a prominent Iranian human rights organization, also reported on the seizure of homes in Roushankouh. It also stated that several people were arrested in the village.

Local officials have said that “20 hectares of national lands” were seized from “profiteers” in Roushankouh. The same official said that eight homes were targeted for demolition by the “order of the judicial authorities.”

However, this is not the first time the Bahai community in Roushankouh has been targeted. A similar incident occurred last year when security forces seized homes and arrested several people.

Against this backdrop, over 100 Bahais have been arrested elsewhere in Iran over the past week. The Intelligence Ministry accused them of spying for Israel. The ministry added that these individuals were the “core nucleus” of the faith in Iran, promoted women to take off their hijabs, and engaged in “colonial teachings” in schools.