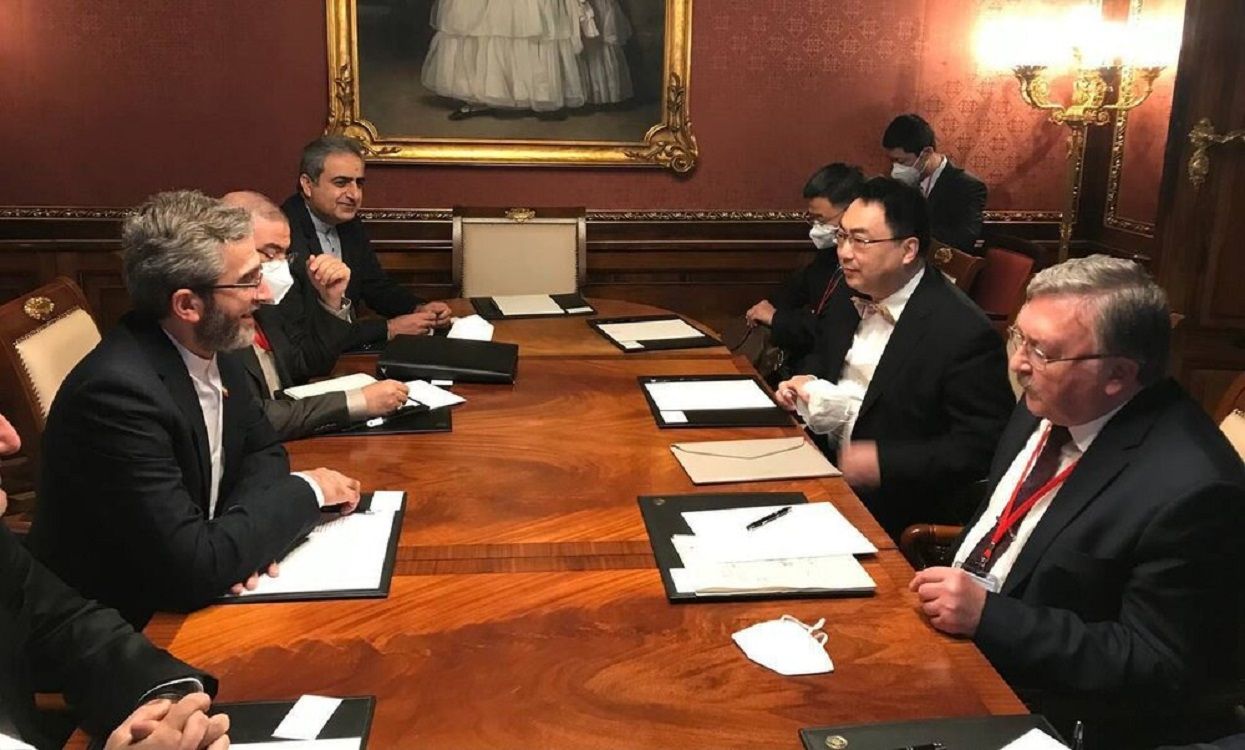 The seventh round of the Vienna nuclear negotiations has ended amid all sides agreeing to work on a single text. EU Deputy High Representative Enrique Mora, who is the coordinator for the negotiations, said this text includes Iran’s recent proposals and the June agreement (reached with the Rouhani administration).

The delegations will return to their capitals for consultations. Some outlets report they will return on December 27th. Iran’s top negotiator at the talks Ali Bagheri said the talks will resume “in several days.”

Mora said “80% of the draft text for an agreement to revive the JCPOA has been agreed upon by the negotiators.” He added that a “reformulation” of the JCPOA was not on the agenda, and the sole aim of all sides was to return to the JCPOA.

Bagheri said the next round of negotiations can be the final round. He said this depends on the other sides accepting Iran’s “rational” positions.

The E3 (Germany, France, and the UK) said after this round of Vienna talks that it was Iran that requested to adjourn the negotiations. They said there had been “technical progress” in the talks in the last 24 hours but that an agreement would have to be reached “within weeks” for the JCPOA to still be effective.

Meanwhile, an Iran-IAEA agreement allowing for cameras to be reinstalled at Iran’s Karaj centrifuge production facility has averted a censure of Iran by the IAEA. One “western diplomat” speaking to journalist Laura Rozen also said the Vienna negotiations were “going better” after the IAEA agreement.

Prior to the end of this round of talks, Iran’s Fars News, which is affiliated with the IRGC, said the European sides at the Vienna negotiations had agreed to negotiate on Iran’s new proposals. Fars cited a source close to the negotiations as saying the new document being worked on in Vienna is based on the agreement reached in June [with the Rouhani administration] and the proposals Iran’s new negotiators brought in this seventh round of talks.

Fars’ source also said that the U.S. side has given Iran’s negotiators two “non-papers” with draft text of returning JCPOA compliance. The source adds that Iran has replied to these white papers with a 12-page document.

Fars’ source stated: “This trend shows that the Americans, despite setting a deadline and putting pressure on them, are looking to continue the negotiations and are trying to have an active approach.”

Fars’ source further said that both the American and European sides in the negotiations have “relatively positive engagement” with the negotiations. But the source says the U.S. and its European allies publicly seek to portray the negotiations as not making progress and blame Iran for this.

Iran and the IAEA reached an agreement for the agency to reinstall cameras at Iran’s Karaj centrifuge production facility. The agreement comes as Iran was poised to be censured by the IAEA for refusing its request to reinstall the cameras.

However, the IAEA’s Director General Rafael Grossi has not condemned the attack on the Karaj facility.

Iran says the cameras will be installed in accordance with an agreement reached with the IAEA last February. As part of this agreement, Iran allows the IAEA cameras at its facility to continue recording but will hold on to their data until an agreement is reached on lifting sanctions. If an agreement is not reached, Iran will destroy the data.

Teachers across 80 Iranian cities staged a strike on December 11-12th. Iranian teachers have long been aggrieved about receiving low wages and have staged similar strikes in recent years.

The core demand of the teachers’ union was for parliament to pass a bill that would increase salaries and update the ranking system of schoolteachers. The union said that if the bill was not passed by December 21st, the teachers would continue their protests.

A demonstration by teachers outside of parliament on December 13th was forcefully dispersed by security forces. Demonstrators were reportedly beaten, and several were arrested, including union representatives Rasoul Badaghi and Amanej Amini.

On December 15th, parliament passed the bill that would increase teachers’ salaries. The bill will have to go to the Guardian Council for final approval.

The bill will see teachers get paid more based on their level of experiences. It also delineates a “ranking” system of teachers based on years of experience.

According to Deputy Parliamentary Speaker Ali Nikzad, there are 733,638 school teachers in Iran.