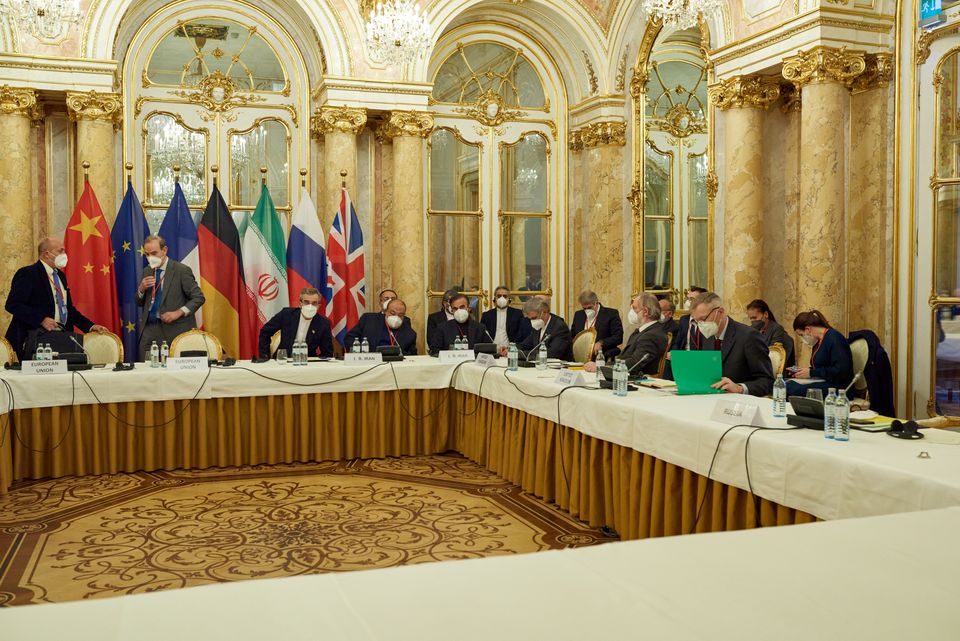 Enrique Mora, the Deputy Secretary General of the EU, is the coordinator for the negotiations. Mora said after the JCPOA’s Joint Commission convened on November 29th that he felt “extremely positive” about the negotiations.

Mora said the P4+1 must “fully take into account” the political sensibilities of the new Iranian administration.  He said Iran’s delegation “recognizes the work we have done in the past six rounds and the fact that we will build on this work going ahead.”

After the last round of negotiations, a preliminary draft agreement was reached. Former Foreign Minister Javad Zarif presented this draft agreement to parliament, which included the lifting of U.S. sanctions that violate the JCPOA. According to Russia’s envoy at the Vienna talks Mikhail Ulyanov, “90 percent of the issues” in the negotiations were resolved after the sixth round of talks in June.

Mora also emphasized in his remarks after the Joint Commission meeting that U.S. sanctions remain in place and “nothing has changed since the previous [Trump] administration.” He said there is a sense of urgency to bring the JCPOA back to life and put an end “to the suffering of the Iranian people.”

Mora also said the delegation may feel the need to go back to their capitals “when we get deeper in the text.” He said the seventh round will be a “mixture” of direct negotiations in Vienna and consultations back in capitals.

The Iranian delegation is headed by Deputy Foreign Minister Ali Bagheri and consists of over 40 members. Many are individuals with backgrounds in economics, trade, and banking.

Iran’s Foreign Minister Abdollahian has said a deal is “within reach if the West shows goodwill.” On the other side, U.S. Secretary of State Blinken said it was “not too late” to revive the JCPOA but added: “I have to tell you, recent moves, recent rhetoric, don’t give us a lot of cause for optimism.”

Meanwhile, Russia’s foreign ministry has issued a statement denying “rumours” that there is a “deadlock” in the negotiations. The state said “all sides” of the negotiations have “one goal,” and that is a “speedy return to the framework of the agreement [the JCPOA].”

An article in Iran’s ISNA news agency gave some details about Iran’s position in the talks. It says there is an “expectation” that America enters a “dialogue” about “economic cooperation with Iranian companies.” It also says there is an “expectation” for OFAC to stop issuing “instructions” [licenses] on a case by case basis and restrictions on “U-Turn” dollar transactions should be lifted so Iran can access its foreign reserves.

The JCPOA’s Joint Commission met again on December 3rd and decided that the delegations would return to their capitals for consultations. The parties agreed on reconvening in Vienna next week to continue the negotiations.

The European parties to the deal have expressed “disappointment and concern” regarding Iran’s new positions in the talks. They say Iran is “walking back almost all of the difficult compromises crafted after many months of hard work.”

Enrique Mora said after the Joint Commission meeting that there were “useful” consultations with Iran in this round of negotiations. He says the sides will return to Vienna “next Wednesday or Thursday.”

Iranian authorities forcefully broke up demonstrators protesting mismanagement of water resources in Isfahan. Farmers in Isfahan had originally started a sit-in protest at the dry riverbed of Isfahan’s Zayanderud river weeks ago.

The farmers seek water for their fall crops and equitable distribution of water resources. They say that dams have unfairly redirected Isfahan’s water resources elsewhere. They have also criticized the development of heavy industries that require large amounts of water in Isfahan.

For two Fridays in a row in November, large crowds of people joined the farmers demonstrating in the dry riverbed. Videos on social media showed thousands of people lamenting the drying up of Zayanderud and criticizing mismanagement of water resources.

Government media initially covered the protests and officials met with protestors. On November 24th, the government reached an agreement with the farmers for them to end their protest. According to the agreement, the farmers will give the government 90 days to address their nine core demands.

After the agreement was reached, authorities began dispersing the sit-in demonstrators in the riverbed. BBC Persian states: “Based on images posted on social media, a number of tents were removed violently and with the resistance of some of the farmers.”

Iranian government outlets blamed the violence on “thugs trying to prevent the farmers from packing up their tents.” Iran’s Tasnim outlet also said there were strong disagreements between the farmers who were for and against ending their protest. Meanwhile, the political-security deputy of Isfahan blamed “infiltrating elements” for trying to create turmoil and said security forces had taken no actions against the farmers.

120 people were arrested in Isfahan that Friday according to the Iran Human Rights Organization. Many were also injured, and at least 19 are suffering from injuries to their eyes according to this same organization.

In response, some Iranians on social media have started a campaign to support the protestors by covering up one of their eyes.

On top of mismanagement, Iran’s water crisis is exacerbated by an unprecedented drought. Last Spring, the Meteorological Organization of Iran said the amount of rainfall is 85.5% lower than the historic national average. 2021 is also the driest year in Iran in the past 50 years. Iran’s Interior Ministry has said 28 Iranian provinces are facing a water shortage.

A group of families whose children suffer from spinal muscular atrophy (SMA) have gathered outside the Iranian parliament. They are calling for imports of medicines used to treat this rare disease.

Deputy Parliamentary Speaker Abdolreza Mesri has called for a “special group” to be set up focused on this issue. He said it should be composed of the health minister and Iran’s Food and Drug Organization.

Ramak Heydari, the director of the “Patient Support Association,” has said the Iranian government is unwilling to pay the costs for importing these medicines. Meanwhile, Heydar Mohammadi, an official within the Food and Drug Organization, says the government must first determine the efficacy of the medicines used to treat SMA. According to BBC Persian, the cost of medicines to treat SMA are between $740,000 to $2 million yearly for one person.

Iran has faced a shortage of medicines, especially for rare diseases, in recent years due to U.S. sanctions. In recent months, families of patients suffering from Hurler syndrome have also held rallies calling for imports of medicines used to treat this rare disease. There has also been a documented shortage of insulin for diabetes patients.

Iran’s Food and Drug Organization has said sanctions have prevented it from paying for imports of many medicines.  Iran’s Central Bank allocates $100 million monthly for the import of medicine and medical equipment, but Iran has difficulty to transfer payments for these imports despite humanitarian exemptions to U.S. sanctions on paper.

A 2019 report by Human Rights Watch found that U.S. sanctions on Iran threaten access by some Iranians to medicines that treat diseases such as cancer and epilepsy, despite exemptions in the measures for imports of humanitarian goods.

Iran’s President Raisi met with the families of SMA patients after they demonstrated outside of parliament. Raisi said he would instruct relevant ministries to acquire the medicine required by these patients. He also said he would discuss with parliament including a provision in next year’s national budget for purchasing these medicines.