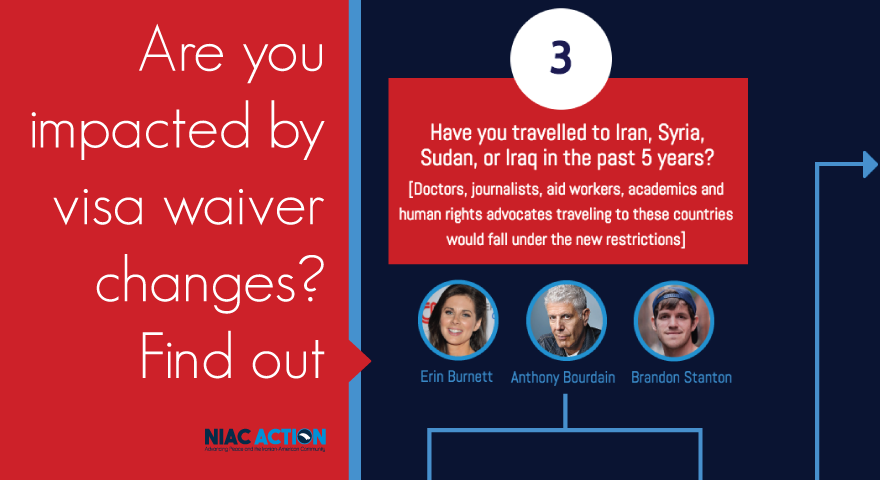 The Visa Waiver Program Improvement and Terrorist Travel Prevention Act (H.R. 158) prohibits citizens of countries participating in the Visa Waiver Program from visiting the United States under the program if they are dual nationals of or have recently traveled to Iran, Iraq, Sudan or Syria. It was signed into law on December 18, 2015, as part of the Omnibus Appropriations Act of FY2016.

The original version of the bill restricted visa-free travel to the U.S. for any citizen of a VWP country who, since March 2011, has traveled to Iraq and Syria – the primary states where ISIS operates – or any other country that the Department of Homeland Security designates as having a significant Foreign Terrorist Organization presence. The legislation was amended to add countries that are designated as State Sponsors of Terrorism to the restricted countries list (Iran, Sudan, Syria), and to expand the restrictions to include not just persons who traveled to these countries but also to prohibit citizens of VWP countries who are also dual nationals of these countries from participating in the program.

Bipartisan legislation has been introduced in the House and Senate – the Equal Protection in Travel Act of 2016 (H.R. 4380/S. 2449) – to repeal the restrictions on dual nationals. NIAC Action and other groups have urged for passage of the legislation and additionally called for the Obama administration to utilize its waiver authority to ensure dual nationals and certain travelers to Iran are not restricted from the VWP.

How can the visa waiver reform impact Iranian Americans?

The direct targets of the law include citizens of European Union or other VWP countries who also hold Iranian, Iraqi, Sudanese or Syrian dual nationality or who have visited these countries in the past five years. They are now required to apply for a visa in order to travel to the United States.

The law may potentially impact Americans who are dual nationals or have traveled to the “restricted” countries because the VWP operates on the basis of reciprocity. EU countries, for example, accept American travelers without a visa because we accepted EU travelers without a visa. However, because we now bar certain citizens from the VWP, the EU can respond by applying the same restrictions against Americans seeking to visit EU countries. As the bill targets dual nationals of Iran, Iraq, Sudan and Syria, it is possible that reciprocal measures would target dual nationals from those same countries living in the United States, including Iranian Americans.

The European Union already has laws in place to expedite reciprocal restrictions in the event that a third country imposes such restrictions on European nationals. In April 2016, the European Commission is set to consider a reciprocity mechanism that would suspend VWP travel to the European Union for all Americans for 12 months. It is unclear if such a suspension will be implemented, as the European Council and European Parliament would have up to 6 months to object before the suspension would go into effect. This reciprocity mechanism was initially triggered because a handful of EU states are not eligible for the VWP, in addition to other complaints. However, the recent restrictions on certain EU dual nationals and travelers further exacerbates existing divides between the EU and the United States over the VWP. Even if the EU chooses to forego full suspension of the VWP this year, such a course would not rule out the possibility of narrower reciprocation against certain categories of American travelers.

Why is NIAC saying Iranian Americans are being treated as second class if we are not currently being impacted by HR158?

It is true that Iranian Americans are not the direct targets of this law, but the law has opened up the Iranian-American community to reciprocation by VWP countries. At this time, it is not certain that the 38 VWP countries – including Europe – will choose to reciprocate. NIAC encouraged all 38 to abstain from reciprocating so that Iranian Americans are not treated as second-class citizens. Hopefully, this effort had an impact and reciprocation does not come to pass.

Even if it does not, the Iranian-American community has a vested interest in ensuring that Iranians outside the United States are not subject to discrimination from the US. Many Iranian Americans have family members in Europe and elsewhere who have been unable to visit their family in the U.S. due to the new visa restrictions. Further, if we permit discrimination against our community on the basis of national origin to stand, it could be easier for lawmakers to target the Iranian-American community directly in the future.

It doesn’t look like the EU is planning to reciprocate – aren’t they just addressing a separate issue regarding the exclusion of certain EU countries from the VWP?
The EU likely views the exclusion of EU states from the VWP as a greater problem than the restrictions on dual nationals, but the two issues are now intertwined. The EU has threatened to suspend the VWP for all American citizens for a year if visa requirements are not lifted for all EU citizens – including nationals of the five countries excluded from the VWP and dual nationals of Iran, Iraq, Syria and Sudan. The EU could choose to suspend the entire VWP, though many view this as unlikely. Even if they choose to abstain from suspending the VWP in July, nothing precludes the EU from targeting American dual nationals directly, and this could be a more politically-viable step for the EU to take.

I am an American citizen or green card holder who is planning to visit Iran. Does this affect my ability to return to the United States?

No. The law does not bar U.S. citizens or green card holders from re-entering the United States after travel to Iran. It solely affects travel between the 38 countries participating in the VWP and the United States. Iran is not eligible for the VWP.

Will the restrictions affect Iranian citizens in possession of or seeking U.S. visas, or Americans seeking to travel to Iran?

Do these changes impact Canadians?

No. Canada is not part of the VWP impacted by these new restrictions. Visa-free travel between Canada and the U.S. is permitted under a separate arrangement unaffected by the legislation.

Could the law impact the Iran nuclear deal?

The administration has offered a waiver for individuals who have traveled to Iran for permissible business under the Joint Comprehensive Plan of Action (JCPOA), side-stepping concerns that the new law represented a backdoor sanction that would violate the JCPOA’s requirement that the U.S. and other parties “refrain from any policy specifically intended to directly and adversely affect the normalisation of trade and economic relations with Iran.” Though Congress provided the administration with an open-ended waiver for the restrictions to protect law enforcement and national security interests, certain Republican lawmakers have expressed opposition to the administration’s use of the waiver, including to exempt JCPOA business.

Iran had protested the visa restrictions and signaled that it would file a complaint. Secretary Kerry, in a letter to Iranian Foreign Minister Javad Zarif, indicated that the administration will implement the visa restrictions in a manner “so as not to interfere with legitimate business interests of Iran,” citing the waiver and other authorities available.

Will the administration offer waivers for dual nationals?

Currently, the administration has only offered to waive the restrictions for certain categories of individuals on a case-by-case basis. These include individuals who have traveled to Iran, Iraq, Sudan or Syria on behalf of international organizations, regional organizations, sub-national governments or a humanitarian NGO on official duty, or as a journalist for reporting purposes. Additionally, individuals who have traveled to Iraq or Iran for legitimate business-related purposes – the latter facilitated by the Joint Comprehensive Plan of Action – are also eligible for a waiver. The waiver process is facilitated through the Electronic System for Travel Authorization (ESTA), which is an electronic program that determines the eligibility of visitors to travel to the U.S under the Visa Waiver Program and was updated to reflect the new restrictions in February.

Are we making a difference?

Yes! NIAC Action staff and grassroots leaders have met with leading Senators and Representatives to make certain they are aware of the problems with the new restrictions. We have worked with a coalition of civil rights, Arab-American, and Iranian-American organizations to mobilize pressure to repeal the discriminatory restrictions. Bipartisan legislation has been introduced in both the House and Senate to repeal the restrictions affecting dual nationals, and the administration has at least considered using its waiver authority for Iranian dual nationals.

NIAC Action grassroots teams and the entire Iranian-American community have been incredibly engaged in this effort, totaling more than 100,000 actions to date, which has given us a fighting chance to repeal the discriminatory restrictions.

How can this be resolved?

There are two main paths to overturn the visa restrictions:

Legislative repeal: Bipartisan legislation – the Equal Protection in Travel Act (H.R. 4380/S. 2449) – has been introduced in both the House and Senate to repeal the restrictions on dual nationals.

Executive action: The White House has waiver authority that can be utilized to waive restrictions on dual nationals and certain travelers to Iran. A House letter organized by Rep. Jared Huffman (D-CA) and signed by 25 other Representatives encouraged waivers for dual nationals and travelers to Iran, and Senator Dick Durbin (D-IL) led a Senate letter signed by 12 of his colleagues urging waivers for dual nationals. The administration has utilized the waiver for business, humanitarian, governmental, and journalist travel to “restricted” countries, but has not provided waivers for family, academic, or tourist travel.