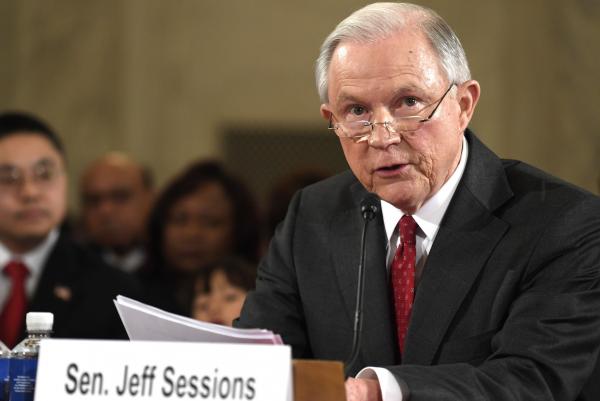 Washington, DC – Donald Trump’s picks to head Homeland Security and the Justice Department attempted this week to put a more tolerant face on the President-elect’s discriminatory campaign proposals to ban or track Muslims. But their alternative – to target visitors to the U.S. based on their country of origin – would mean that Iranians would almost certainly be subject to enhanced questioning and tracking given the Iranian government’s designation as a State Sponsor of Terror.

Senator Jeff Sessions (R-AL), the nominee for Attorney General, said that he opposes a registry that targets people based on their faith, though he did say that people should be questioned about their religious beliefs when entering the country to determine that they do not hold extremist views towards America. Instead, Sessions said that national origin, rather than religion, could be the basis for establishing a registry to track foreign visitors.

Sessions suggestion echoed post-September 11th efforts to screen and track visitors to the U.S., primarily from Muslim-majority countries including Iran. That program, the National Security Entry-Exit Registration System (NSEERS), was decried as ineffective and discriminatory. However, when challenged in court, NSEERS was upheld because the court found it was not specifically intended to target people based on religious faith. Given Donald Trump’s rhetoric on the issue, courts could be less likely to side with the Trump administration if such programs are enacted and challenged.

On the campaign trail, Trump called for “a total and complete shutdown of Muslims entering the United States.” When his proposal was criticized, Trump responded by adjusting his approach – claiming he would target people based on national origin rather than faith. Even his own comments suggested it was merely a rebranding of his calls for targeting Muslims. “I’m looking now at territory,” he said at the time. “People were so upset when I used the word Muslim. Oh, you can’t use the word Muslim . . . . And I’m OK with that, because I’m talking territory instead of Muslim.”

The Obama Administration, for its part, suspended the NSEERS program in 2011 and, as one of its final acts, formally dismantled the program this past December – ensuring that the Trump Administration could not quickly reconstitute it when assuming office. However, given Sessions’ apparent endorsement of instituting such a policy, visitors from Muslim-majority countries – including Iran – could become the targets of a new effort under the new administration.

General John Kelly, who is nominated for Secretary of Homeland Security, was asked by Senator Gary Peters (D-MI) about Trump’s anti-Muslim rhetoric. “First off, do you agree that putting mosques under generalized surveillance and establishing a Muslim database – two proposals that were discussed by President-elect Trump – would raise serious Constitutional issues under the free exercise clause of the 1st amendment and the equal protection clause of the 5th and 14th amendments?” asked Peters.

Kelly stated that he believed it did and did not think it’s appropriate to use religion or national origin as the only factor for special scrutiny in counter-terrorism. He also stated that he considered the 1944 Supreme Court case that permitted Japanese American internment camps, U.S. v. Korematsu, as illegitimate and bad precedent. When questioned on NSEERS, Kelly did not appear to be fully briefed on the program, but appeared to indicate that he had no plans to reinstitute it.

Trump’s nominee for Secretary of State, Rex Tillerson, was also questioned about a potential Muslim registry. “I do not support targeting any particular group,” said Tillerson, responding to questions from Senator Cory Booker. Tillerson also said he agreed with Booker’s concerns that anti-Muslim rhetoric could undermine U.S. relationships abroad. However, Tillerson did indicate he may support a registry that is “ broadly applied to any person entering the country that could present a threat.”

If the Trump administration plans to pursue a religious registry or to reinstitute the NSEERS program, it could encounter resistance in Congress. Sen. Cory Booker (D-NJ) has introduced a resolution backed by several of his Democratic colleagues to block such a move, and Rep. Suzan DelBene (D-WA) has reintroduced a provision prohibiting religious registries in the House.