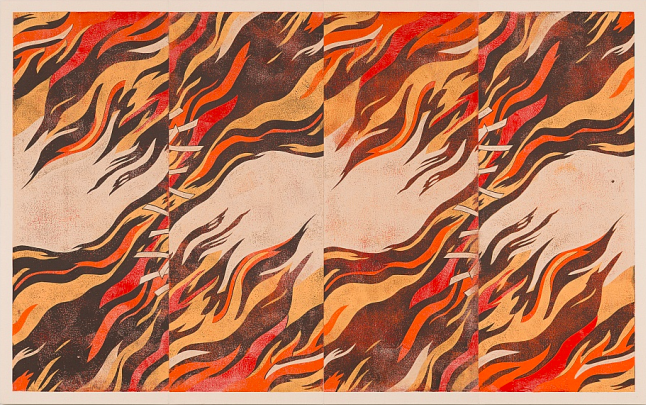 Some of the most renowned and celebrated figures in Iran’s vast history are artists and poets. Like many diaspora groups, Iranian Americans often preserve their culture and identity through art and literature. In fact, I was recently motivated to attend an art show in Los Angeles for similar reasons, the artist, Kour Pour, was British Iranian and lives in Los Angeles. A hybrid identity I could certainly relate to, when I first searched for more about Kour Pour, I found his work on Persian rugs. My initial thought was that the art was stunning and, of course, there was no surprise to see an artist of Iranian heritage make use of Persian artifacts in his work.

However, when I visited Kour’s exhibition in Los Angeles this past August, I saw something unexpected, an entire body of work inspired by traditional Japanese prints. Make no mistake, the collection was as striking as his previous works, but I had expected an “Iranian” artist and thus “Iranian” art. In my struggles to understand my own identity and find a sense of belonging in the place where I was born and raised, I realized that I had projected a sort of caricature onto my peers.

After a fascinating conversation with the artist himself, it was clear that Kour was not an Iranian artist or a British artist or an American artist. He was simply an artist who hoped his work would run deeper than the shallow surface of our bordered identities and highlight how we are all connected in spite of the invisible boundaries that divide us.

When asked what originally drew him to Persian rugs in his art, Kour recounts his father’s storefront in England, which for a time served as a Persian rug store: “I was very young, crawling around on these rugs, looking at these colors and shapes, that was my first introduction to art as well as the cultural relationship to the carpet.”

What Kour found most fascinating about the rugs was their movement over place and time. “You see carpets travel to the West and as they move you notice how the patterns and colors transform in relation to cultural taste. You see images popping up in designs that arrive from Portugal to China. Essentially, the carpet acts as a record of movement. I also love that the carpet represents home and also has a nomadic value. It’s this portable object that you roll up and carry along with you to a new place to unravel. That new place then becomes your home.”

When thinking of movement more broadly, Kour links it to the shared experience of people’s movement. Migration and movement are part of all human history, and for Kour, his inspiration comes from that cultural exchange.

“I draw upon different geographies and cultures to create artwork so I think hyphenated identity is key. When you live in that in-between place you have an experience and what I’ve found is that, the friends I’ve made in Los Angeles may not share the same race or identity or culture, but we do share the same experiences and that is our movement. If I look at my own experience, I’m British, I’m Iranian, and I live in the United States. I am basically an embodiment of Western influence in the Middle East, I don’t exist if that doesn’t happen. And that’s common, that’s not just me, that’s many people these days of mixed identities… Looking at art, you can trace the history of cultural exchange and political movement.”

While Kour is always mindful of the weight of his own identity, he describes the “in-between” spaces that his identity occupies.

“Iranian art is very important to me and I do believe we need to support Iranian art and Middle Eastern art because there’s a poor view and incorrect history of those places as told in the United States. At the same time though, there’s a bigger picture going on in my work. It’s about immigrant culture and the shared experiences of human movement. For example, it would be wrong to say that Persian miniature painting is a purely Iranian art form as it drew on painting traditions from other countries and cultures. The art form itself is an amalgamation of styles and somehow over time we have simplified its rich origins.”

“I don’t fit into a simple identity. I’ve never been to Iran and my Farsi is terrible so I’m not ‘Iranian’ enough to some. My mother was British, and I grew up in England but was never accepted there, so I’m also not ‘British’ enough to others. You find yourself in these spaces, with different people that share similar experiences and I think that the experience is what is really important to connect to. If we reflect too heavily on national identities than a certain kind of tribalism and separation happens. It’s complicated.

“My work is about human connectivity and understanding, about listening and seeing one another. There might be some anger there, or there might be this rebellion of messing with outdated institutions and establishments, but at the end of the day it all comes from a place of love and inclusion.”

Looking at Kour’s work and listening to what inspires him it becomes clear that his art, like all art, moves beyond borders and transcends the confines of our ascribed identities: “I like the idea that with artwork you can create that in-between space… I play with what is thought of as ‘Western’ aesthetics and what is thought of as ‘Eastern’ aesthetics. I don’t like it as a binary, but hopefully I can use it to create something different.”

For Kour, art carries different meanings and can serve different purposes, but the weight of its impact is evident.

“Art and creative space encourages problem solving where you can talk about the ways in which we’re different and at the same time acknowledge how we’re all connected, and that’s a really productive space to be in. We all have different histories, we can’t deny or erase those histories, but I think if you do have similar experiences, which many of us share, a lot of those problems become easier to overcome and what you’re left with is pure human connection.”