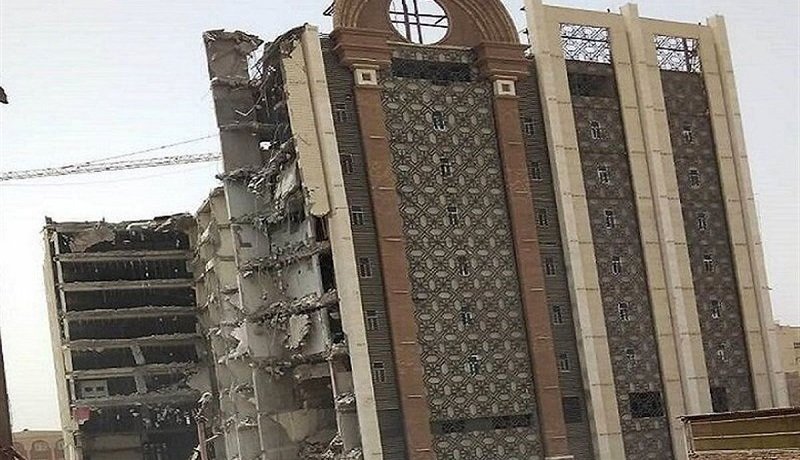 Week of May 23rd, 2022 | Iran Unfiltered is a weekly digest tracking Iranian politics & society by the National Iranian American Council

A 10-story building that was part of the metropol complex in the southwestern Iranian city of Abadan collapsed on May 23. Amid continuing rescue efforts, Abadan’s Governor Ehsan Abbaspour confirmed the deaths of 24 people on May 26.

According to Iran’s ISNA outlet, 37 people were injured in the collapse.  As of May 26, 19 people had also been rescued from under the rubble. Mojataba Khaledi, the spokesperson for Iran’s national emergency services, said it is likely that 50 are under rubble.

Officials and many people in Abadan have blamed corruption and a failure to abide by construction codes for the building’s collapse. The governor of Khuzestan province Sadegh Khalilian said “technical” and “safety” standards were not met in the building’s construction.  He added that “this is known as one of the primary causes of the accident.”

Karim Hosseini, an MP representing Khuzestan, also said that warnings had been given to the owner of the building prior to its collapse. He asserted that the owner received a license for the building through “bribes.”

Many Iranians on social media and in Abadan did not believe reports that Abdolbaqi died. Protestors in Abadan chanted slogans accusing officials of “lying” about his death. Meanwhile, the prosecutor’s office in Khuzestan asserted that his body was identified via DNA testing.

Protests broke out in Abadan and several other regional cities on May 25. Demonstrators chanted slogans against the government, including Supreme Leader Ayatollah Ali Khamenei, and demanded accountability for the building’s collapse.

Khamenei issued a condolence message three days after the building’s collapse. He called for a “punishment that teaches a lesson” to the “perpetrators.”

Interior Minister Ahmad Vahidi also visited the site and said, “a crime has taken place in metropol.” He stated, “Those who easily played with people’s lives to earn more money cannot be forgiven.”

Canada’s soccer federation tweeted on May 26 that an upcoming June 5 friendly soccer match between the national teams of Iran and Canada would be canceled. The federation gave no further explanation. Read NIAC’s statement on the cancellation here.

The cancellation comes after a campaign was launched to cancel the match by conservative political forces in Canada, some Iranian opposition activists, and some families of victims of Ukrainian civilian airliner PS752 that was mistakenly shot down by Iran in Jan. 2020. Euro News stated that the game was to be Iran’s first training match ahead of the 2022 FIFA World Cup in Qatar.

Ahead of the planned match, the Iranian national soccer team’s coach Dragan Skočić said the game would have been a valuable opportunity for Iran’s players before the World Cup. Skočić said Canada was the “best option” for practice because its play style is similar to the United States, which is in Iran’s group in the World Cup. Iran’s national team currently has no other friendly matches scheduled.

Iran’s soccer federation condemned the cancellation as a “unilateral” move. It said the game was “canceled by the host country for unknown reasons.”

Iran’s first game in the World Cup is scheduled for Nov. 21 against England.

Iranian Foreign Minister Hossein Amir Abdollahian spoke about the JCPOA negotiations at the World Economic Forum in Davos on May 26. In an interview with journalist Fareed Zakaria, Abdollahian stated that Iran is “serious and determined to reach a good agreement.”

Abdollahian said the U.S. designation of the IRGC as a terrorist organization is a “side issue.” He said the differences in the talks should not be “reduced to one issue” and added that the “priority for us is the interests of the Iranian nation” and “ending the effects of maximum pressure.”

The foreign minister accused “Israel’s lobby” of “overstating” the issue of the IRGC’s terrorist designation. He stated, “To be frank the cause of the pause in the negotiations is our economic asks and demands for global trade.” He added, “We cannot have a return to the JCPOA with Iran being deprived of its economic interests and the effects of Trump’s maximum pressure remaining.”

Meanwhile, U.S. Special Envoy to Iran Rob Malley testified at the Senate Foreign Relations Committee on May 25. Malley said the Biden administration still seeks a JCPOA return but that prospects for a deal are “tenuous at best.”

Malley criticized the Trump administration’s policies towards Iran during the hearing for taking Tehran closer to nuclear-weapons capability. At the same time, he issued the threat of “all options are on the table” to Iran.

The U.S. also announced new sanctions against the IRGC this week. A Greek official also said on May 26 that the U.S. asked for Greece to seize an Iranian oil tanker in its waters last month. The oil cargo is being transferred to the United States.

IRGC Colonel Hassan Sayyad Khodaei was assassinated in Tehran on May 22. According to Iranian outlets, he was killed by 2 gunmen on a motorcycle while in his car outside of his home.

In the aftermath of the assassination, Iranian outlets said Khodaei was involved in Iran’s military intervention in Syria.  IRGC spokesperson Ramezan Sharif blamed Israel for the killing and said Iran would retaliate.

Iran’s Nour News, which is affiliated with the Supreme National Security Council, said the assassination crossed a “redline.” It said it changes “many equations” and that the “architects” of the killing will “pay a heavy price.”

The New York Times on May 25 cited an “intelligence official” as saying that “Israel has informed American officials that it was behind the killing.” The NYT and Israeli media have asserted that Khodaei oversaw an IRGC force in charge of “abductions and assassinations of foreigners around the world.”

Meanwhile, other outlets have cited sources saying that Khodaei was responsible for Iranian technology transfers to Syria and Lebanon.

Iran’s hardline newspaper Kayhan said the identity of Khodaei was likely due to “[security] pollution” in Damascus, meaning Israel discovered him via intelligence operations in Syria. The reformist newspaper Etemad said the assassination was carried out with the aim of “sabotaging the negotiations to revive the JCPOA.”