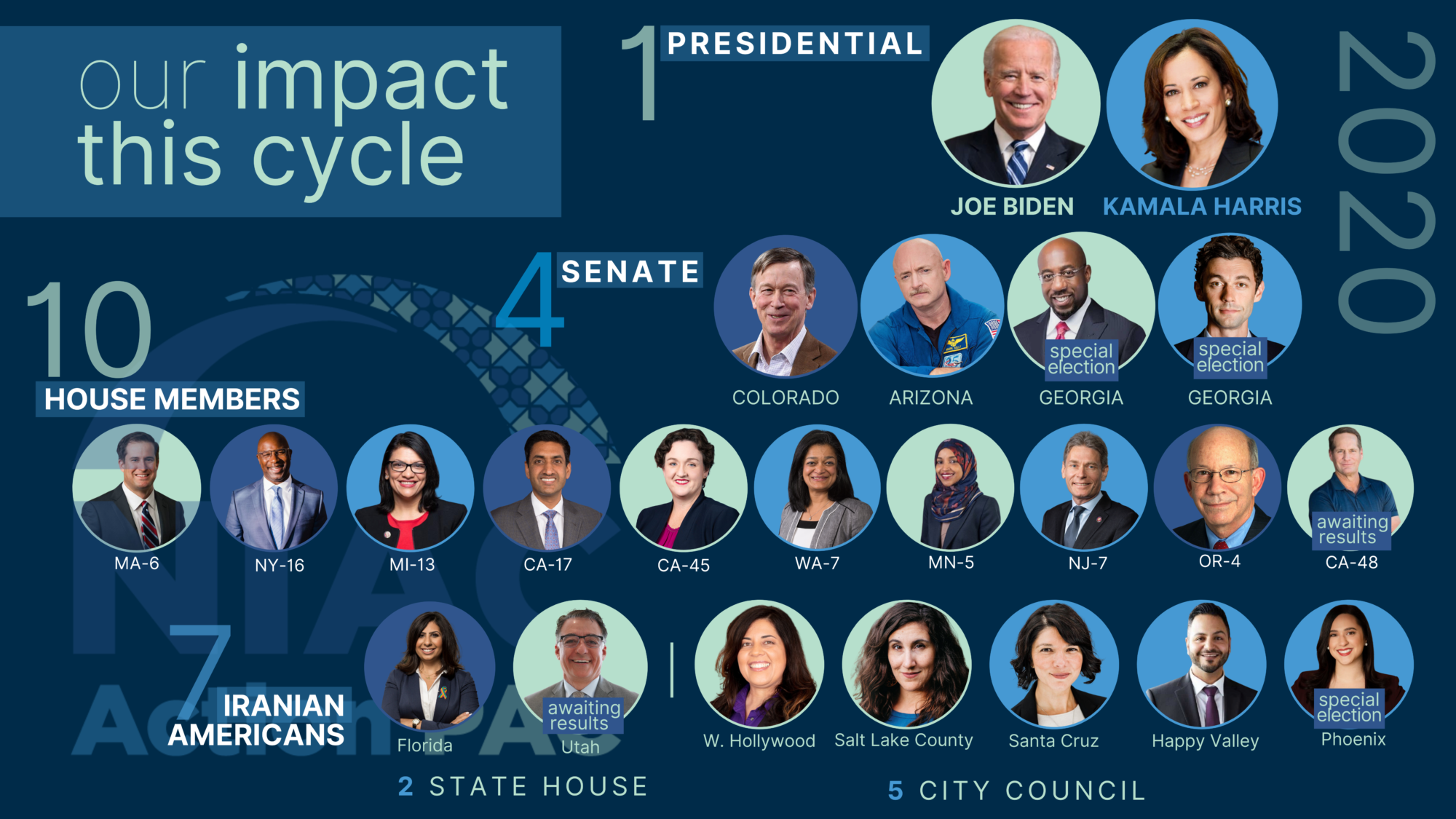 The Impact of NIAC Action on the 2020 Election

Below is a breakdown of our successes and how NIAC Action and our members helped elect a President and Congressional candidates dedicated to advancing peace and diplomacy,  securing equitable immigration policies, and protect the of civil rights of all Americans:

As of November 5th, NIAC Action endorsees won 13 out of 18 races, with one additional race going to a runoff and three races having yet to be called. For live results on all our races, please see our 2020 Election Hub Tracker.

This election season, more Iranian-Amereican candidates ran for office than ever before. Some highlights of our Iranian-American candidates include Anna Eskamani, who won a resounding victory in her bid for reelection for the Florida House of Delegates in District 47. In 2018, she was one of the first Iranian American women elected to their state’s legislatures. Shireen Ghorbani (D-UT) also won her reelection bid in Utah for the Salt Lake City Council. And in Happy Valley, Oregon, David Emami successfully fended off his challenger, securing another term as Councilor of the City Council.

Sepi Shyne made history as the first Iranian American and first LGBTQ Iranian woman elected to West Hollywood City Council, defeating one of the city’s longest-serving Council members. Sepi previously ran for the seat in 2019 and came within one percent of ousting the incumbent. In Santa Cruz, CA, Shebreh Kalantari-Johnson also won her first election in her bid for a seat on the Santa Cruz City Council.

Two candidates are still in the running. Yassamin Ansari, who finished first in a five-way race for Phoenix City Council, now heads into a run-off election in March 2021 where, if elected, will win her first race for public office. And Siamak Khadjenoury’s race for the Utah House of Delegates has not been called yet. He is currently trailing the Republican incumbent by just 235 votes.

NIAC Action endorsees in the House of Representatives largely swept their races, despite some Democratic candidates facing expensive and hotly contested races. Notable wins in swing districts were secured by NIAC Action endorsees Tom Malinowski (NJ-7) and Peter DeFazio (OR-4), both of whom faced heavily-backed GOP challengers. Similarly, Katie Porter (CA-45), whose profile and popularity has skyrocketed in the last two years, exceeded expectations in what was supposed to be a closely contested race in a traditionally Red district. NIAC Action endorsee Harley Rouda (CA-48)’s race in Orange County, CA has yet to be called.

NIAC Action did not endorse any Senate candidates but our members provided financial support for many of the crucial races needed to flip the Senate. At least two challenger candidates defeated pro-Trump incumbents in the Senate, including Mark Kelly (D) in Arizona and former Governor John Hickenlooper (D) in Colorado, both of whom are supportive of the JCPOA and more equitable immigration policies.

Two other Senate candidates remain in the running in Georgia, Jon Ossoff (D) and Reverend Raphael Warnock (D). The two candidates are heading into a special election on January 5, 2021 where the outcome of the races will determine the fate of the Senate. 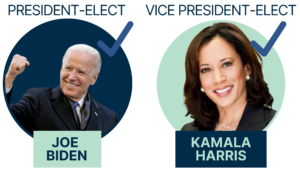 NIAC Action helped secure commitments from all the major Democratic presidential candidates as well as in the Democratic National Committee platform to return the U.S. to its commitments under the Iran nuclear agreement and to rescind the Muslim Ban. When Joe Biden became the presumptive nominee, we put the question to our members on whether to endorse him — and 86% voted yes. We were proud to support the Biden/Harris campaign with significant financial support from our membership and sending over 250 volunteers to phonebank in the battleground states.

This cycle, the Iranian American community was a financial powerhouse among the immigrant and second-generation communities: