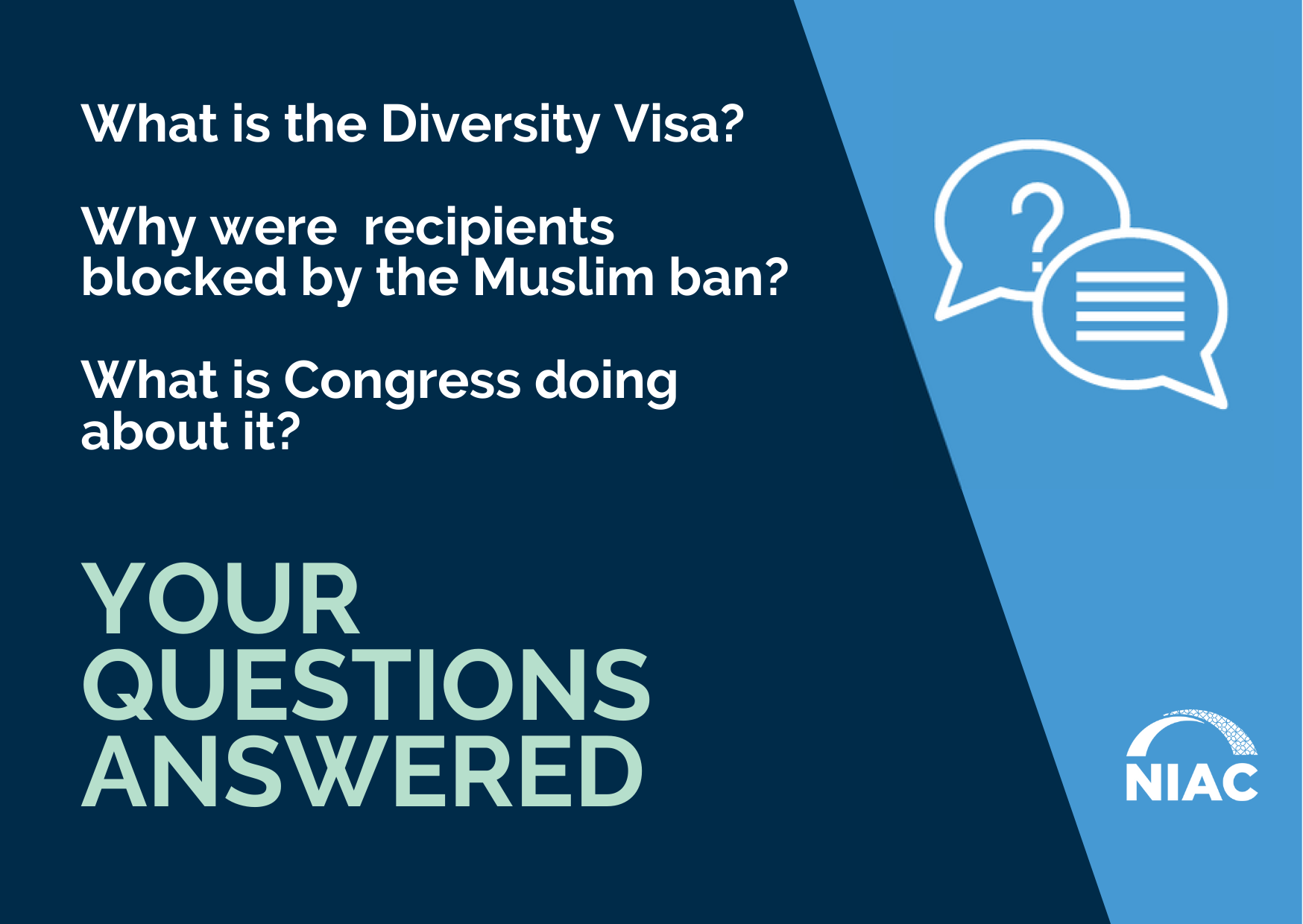 Trump and his Muslim ban are gone, but the damaging impact lingers on for many. This includes thousands of individuals selected for diversity visas during the Trump administration who were blocked from securing their promised visa by the Muslim ban and other Trump immigration orders. However, the fight for justice has continued, with the House Appropriations committee passing two recent amendments to rectify the issue.

Read on for a breakdown of the latest developments around the Diversity Visa then join us in taking action and urging Congress to make visas available to those blocked by Trump’s bans.

What is the Diversity Visa?

It’s a type of visa that people from countries with historically low immigration rates to the U.S. can apply for. It’s highly competitive, with only around 50,000 people being selected in the visa “lottery” each year— compared to millions of applicants. Most Diversity Visa recipients would not be able to enter the U.S. through other ways (such as sponsorship from a family member or workplace), which makes it all the more valuable.

Why were Diversity Visa recipients blocked by the ban?

The cruelty appears to have been the point. Recipients were elated to be selected for a diversity visa, with many selling off possessions, going into debt or traveling through war zones to finance their trips to visa appointments. However, that elation quickly turned to despair as they realized they were in fact ineligible due to Trump’s bans. Worse still, eligibility for a visa is time bound, as legislation mandates that the eligibility expires at the end of the fiscal year in which they were selected. The Biden administration has indicated it needs Congress to act to make visas available to those who were selected but unable to secure their visas due to Trump’s immigration orders.

What is Congress doing about it?

In addition to these amendments, Representative Ritchie Torres (D-NY) introduced the Keeping our Promise Act (H.R. 3548) to restore the Diversity Visas. Several members of Congress have also emphasized the urgency of acting, with Rep. Judy Chu (D-CA) and Sen. Robert Menendez (D-NJ) sending letters to the House and Senate Appropriations Committees requesting a legislative solution.

What are the chances these amendments pass into law?

Progress in the House of Representatives is encouraging, but the amendments still face a long road to passage. The provision still needs to pass the full House of Representatives and the Senate before going to the President’s desk. The Senate Appropriations Committee has yet to consider its own Homeland Security spending bill, and it is unclear whether similar amendments will be debated and adopted.

However, passage through a House committee has generated positive momentum. Given that many of those impacted are outside the country, it is important for civil society organizations— including NIAC— to push for a solution, share the stories of those impacted and advocate for a fix so that the United States lives up to its commitments.

Hear from those impacted:

Aref, an emergency room doctor from Iran, dreams of practicing medicine in the United States and was finally selected in the Diversity Visa lottery in 2019. The Muslim Ban extinguished those hopes, however. Now, he and others “are fluctuating… between periods of hope and periods of disappointment” as they await legislative action.

Anwar, from Yemen, was selected in the lottery a few years ago and hoped for a better life for him and his family. Months later, he was denied a visa after taking the dangerous journey to the Djibouti Embassy. Now, he worries about his family’s well being: “we fear we may find ourselves unable to educate our children or provide them with food and medicine.” With the safety of Anwar and thousands of others on the line, it’s essential that Congress act swiftly to grant these long-overdue visas.

You know the facts, now take action. Click here to tell Congress: fulfill our promise to Diversity Visa recipients and make visas available to those blocked by Trump’s bans.